If I were a betting man, (and I’m not) I would guess that NVIDIA’s decision to stop designing and promoting AMD based chipsets is based on several factors.  The first would be of course potential hard feelings for AMD shacking up with ATI.  There was little love lost between NVIDIA and ATI, and while each respected the other (to a point), they were not in friendly competition.  With the acquisition of ATI, AMD was no longer the close partner that NVIDIA relied upon to become more of a platform company themselves.  Instead AMD was the enemy, and not only did AMD get the graphics division but also the chipset division, so it was competing with NVIDIA in two areas.  And all to the benefit of AMD processors. 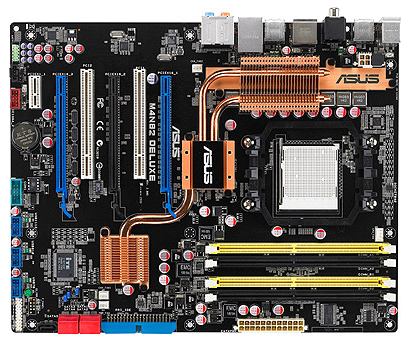 Will the 980a be the last gasp of a native NVIDIA SLI solution on the AMD platform?  NVIDIA claims that other motherboard manufacturers are developing products for the AM3 socket with the 980a chipset, but so far only Asus has a product out, and it is AM2+ based.


Another reason would be that AMD now had integrated graphics that were as good, if not slightly better, than what NVIDIA had for the platform.  Add into that the fact that chipsets were starting to lose their functionality that could help differentiate products from different chipset providers.  So when NVIDIA looked at the situation, they saw a great opening in the Intel market to provide a superior integrated solution, and untapped potential there to make some significant inroads.  Pricing on the AMD side is also quite a bit more stringent than on Intel’s, and this is again related to the overall performance of the AMD CPU parts dictating the cost of the CPU plus the platform.

Unfortunately for NVIDIA, this decision may in fact hasten them out of the chipset market altogether.  While the Intel side has untapped potential due to its dominance in the marketplace, the upcoming obsolescence of the front side bus based platform that Intel has used for decades will eventually cut NVIDIA out of the market altogether.  Unless of course NVIDIA can acquire the necessary licenses to offer QPI and DMI based chipsets.  We can certainly ask VIA how well that process went for them.

So for the time being if a user wants SLI with their Phenom II, they need to step back to AM2+ motherboards based on older designs.  As mentioned before, the 980a is currently only being used with one motherboard from one manufacturer, and it does not even support AM3 at this time.  From JHH’s comments, it certainly seems as if SLI on the AMD platform is a dead end, primarily due to NVIDIA’s apparent abandonment of the platform as a whole.  OEMs still utilize the integrated NVIDIA chipsets for certain products, but it seems as if all new development for the AMD platform has stopped.

Has the Dragon chased NVIDIA away from supporting AMD CPUs as vigorously as they used to?  Certianly from a technical standpoint the AMD chipsets hold nothing over the NVIDIA products, and are in fact a fair bit lacking as compared.  Will we always forever wonder why NVIDIA has seemingly abandoned consumers who want an AMD processor with a NVIDIA chipset and SLI support?


Considering that NVIDIA saw that AMD was competing with them in chipsets and graphics, and more functionality was going to the CPU rather than the chipset, we can see the extreme irony of them jumping into a marketplace with a competitor that is 10X larger than AMD, has a $1 Billion dollar/year chipset business, and will be releasing a high end graphics solution that is aimed at competing in both business and gaming.  It just strikes me as odd, and I keep coming back to this, why NVIDIA would turn its back on a strong revenue source for their chipsets, and by way of SLI, their graphics cards.

Perhaps it is not too late for NVIDIA in the AMD market.  If the ship could be turned around, then hopefully we would see more development of the 980a and other AM3 supporting chipsets from NVIDIA.  If NVIDIA does not do this, then eventually they will be forced to license SLI to AMD, if they want to be a presence in enthusiast circles with multi-GPU setups that are Phenom II based.  While AMD does not currently have the fastest processor out there, they have made a huge amount of headway with the Phenom II series of products.  Again, it makes no sense to me why NVIDIA would turn its back on a steady source of revenue, and one which helps out their standalone graphics business by allowing users to put two video cards (or more) into one machine.  In the tough economic times that the world is facing, it seems amazingly shortsighted of NVIDIA to give up on any business, especially when they have the majority of that business, which would further provide positive revenue flow.

Bad Things to see on your Batter Backup Device

Have no fear: the podcast will soon be here!!