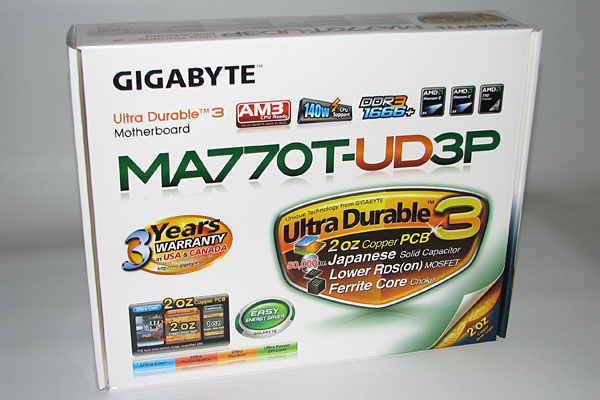 The retail packaging for the MA770T-UD3P is focused around Gigabyte’s Ultra Durable 3 branding which highlights the 2 ounces of copper Gigabyte uses in its PCB. It also highlights the use of Japanese solid capacitors, lower RSD(on) MOSFET, and ferrite core chokes. One other awesome thing to mention is this board is covered by a 3-year warranty for US and Canada customers. 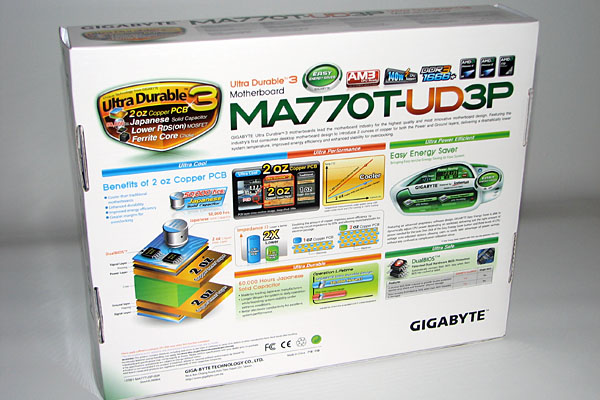 The back panel of the retail packaging goes into more detail about the benefits of having 2 ounces of copper in the PCB as well as their custom Dual BIOS setup they are using in their entire line of motherboards. Another great feature they discuss on this panel is the Easy Energy Saver function which helps dramatically reduce how much power the system needs during operation. 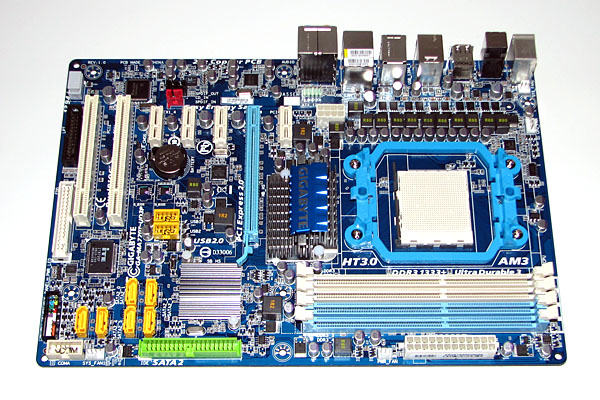 The actual layout of the various controllers, jumpers, and headers are pretty standard with most motherboards that have come across my desk in recent memory. The 24-pin power connector is located on the top right-hand side of the PCB, and the parallel header is near the six SATA headers and front panel headers. 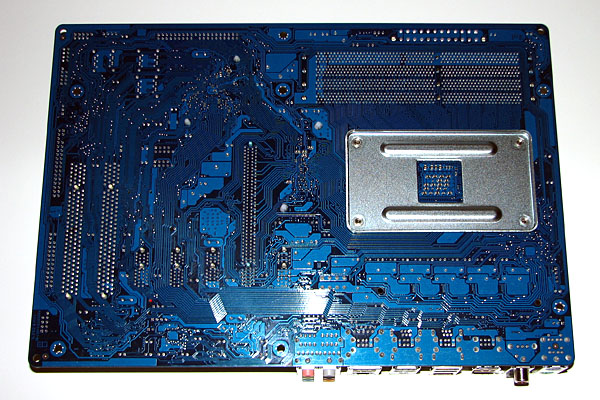 The back of the PCB has a fairly large piece of aluminum directly behind the CPU. Nothing else stands out here. 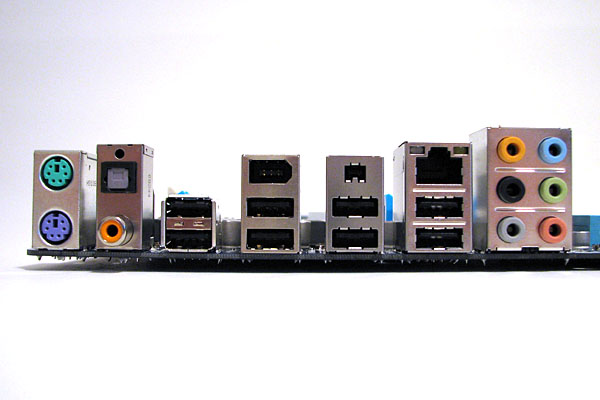 The back I/O panel is quite robust for a budget-minded board like this. Gigabyte included eight USB 2.0 ports, two variations of Firewire ports, PS/2 keyboard and mouse ports, Gigabit LAN jack, 8.1 audio, and SPDIF in/out headers. These features are an excellent example of modifying a board to match a consumer’s needs as well as the needs of their budget. 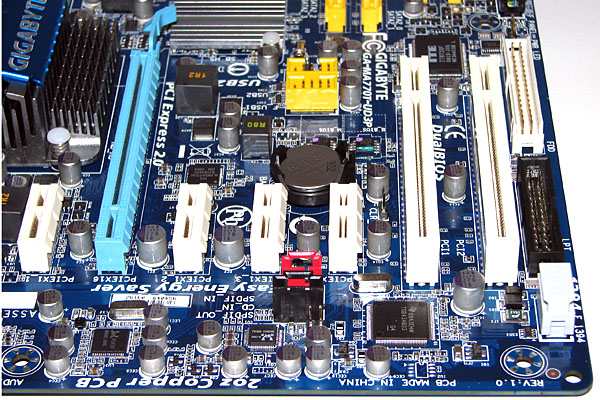 One of the main crutches of purchasing this board is the single PCI-E x16 slot. But, if users are considering this board then they are most likely not going to be able to afford dual or triple video card configurations. The board also has four PCI-E x1 slots and two PCI slots for greater expandability. 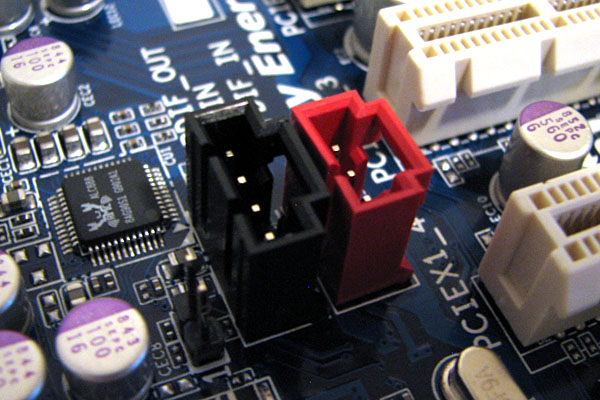 Here’s a close-up of the CD In and SPDIF In ports available on board next to the Realtek ALC888 audio chip. 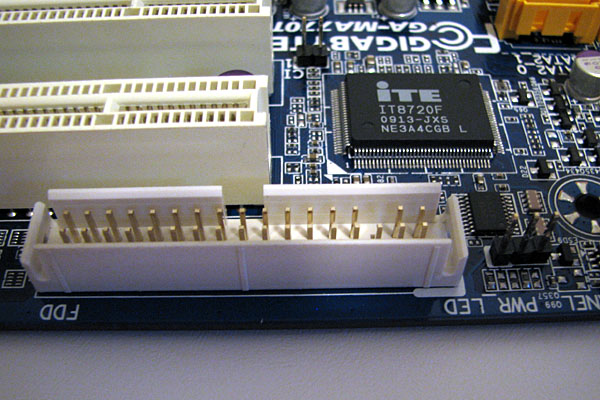 This board includes legacy support for floppy drives. 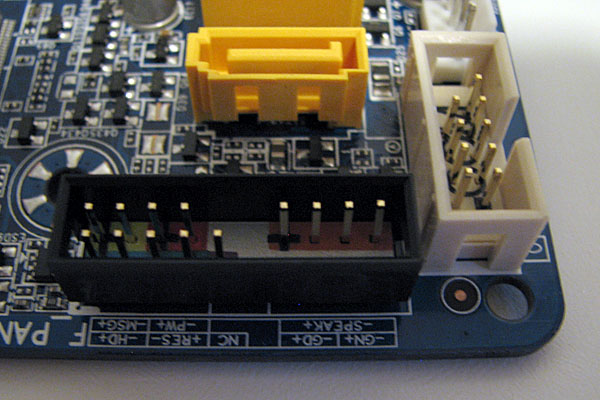 Here’s an upclose and personal look at the front panel headers for the power button, reset button, speaker, and hard drive LED. The power LED is located off to the left of these headers. Our readers can also see the communications header on the right side of this header panel. 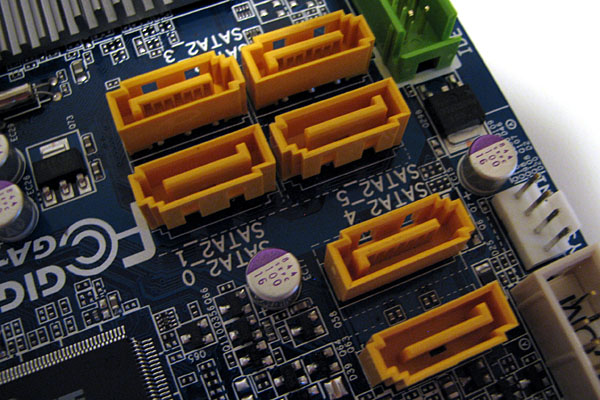 There are six SATA 3 Gb/s headers onboard that also support RAID 0, 1, and 10.  This is an excellent feature that really gives makes this board a great value for those looking for onboard RAID support. 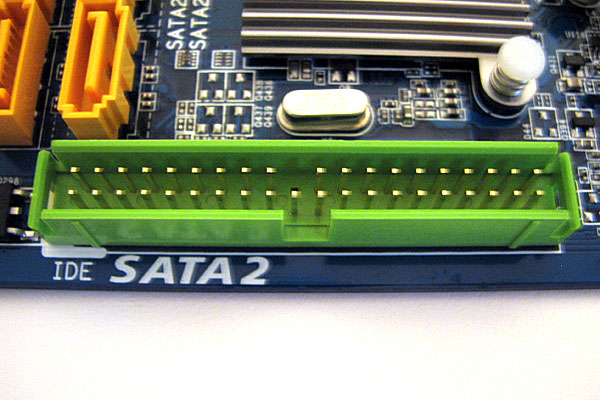 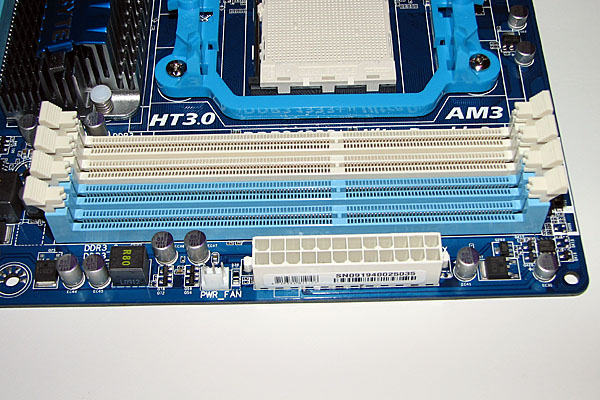 There are four DIMMs that run dual channel DDR3 1666 (O.C.), 1333, or 1066 memory modules. The user manual says this board can only handle RAM that uses 1.5 volts and every DIMM combined can only handle 16GBs of total memory. 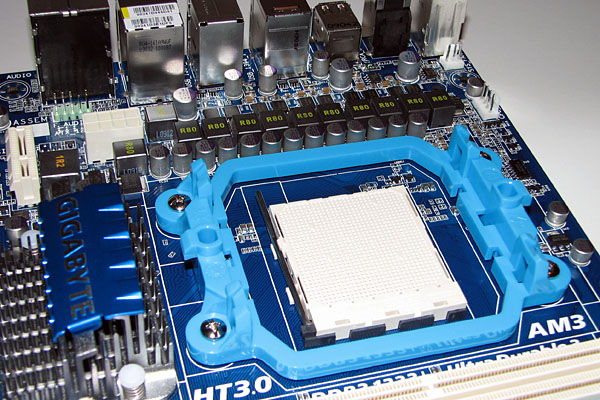 As with almost every Gigabyte motherboard we’ve tested of late, there is plenty of run around the CPU socket for using third-party air or water cooling components. One item to note is the location of the 8-pin power connector, which can now be found by the high definiton audio header in the top left-hand corner of this photo.

After seeing the initial price and features on the UD3P I had my reservations about its flexibility and available options. But, upon further inspection, I wasn’t left with much that wasn’t included in some form or function. The onboard RAID support is more than adequate as well as the full x16 PCI-E slot that should work great for today’s most demanding graphics cards. It’s too bad they had to skimp a bit by not including one more x16 PCI-E slot, but keeping the cost under $80 is challenging to say the least. The DDR3 support is also more than enough for any gamer or professional who needs to run dual channel RAM for high-definition gaming or creating graphics and video editing. All in all, there’s a lot to like about this board and not much to complain about. The PCB quality is also top notch and follows Gigabyte’s signature 2 ounces of copper, which helps with heat discipation but also the stability of the board itself. 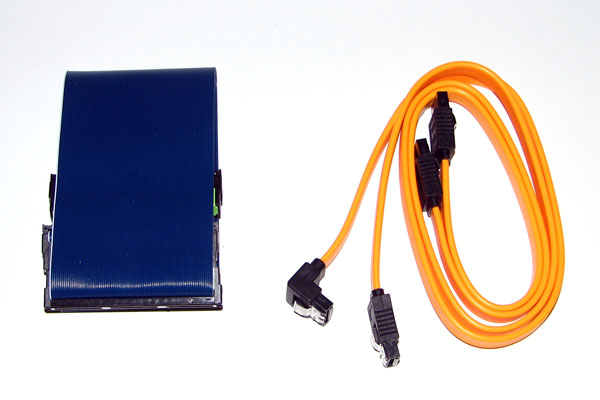 Gigabyte included one ATA cable and two SATA cables with the UD3P. That’s not much to work with, but definitely should do the job for a basic computer system’s needs. 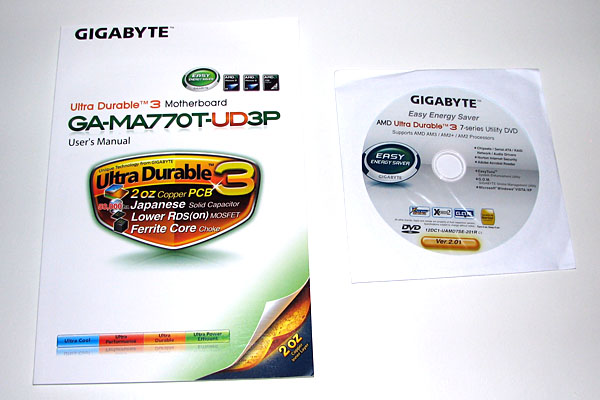 They also included a user manual and driver DVD that also have a ful trial programs and custom utilities to enhance a user’s experience while using the UD3P. 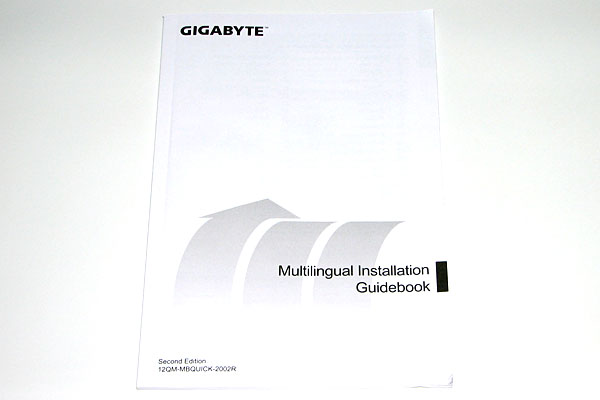 This multilingual installation guidebook should also come in handy for those who don’t speak english as their first language. 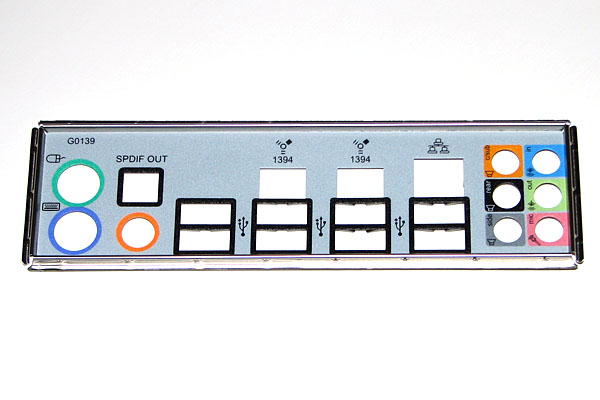 Lastly, Gigabyte included a color-coded I/O backplate taht clearly lays out which devices should be used in each individual port.

The extra accessories were a bit scarce, but that’s definitely not one of the selling points in motherboards that fall in this price range anyways. People are looking for simple features on the board itself and they are typically not concerned with all the extra accessories bundled with the hardware.