When I say HUGE roadmaps that’s what I really mean.  PC Watch has done their usual thing and drawn up some damn impressive tables with the future of Intel written all over them.  We are just going to look over the desktop versions for right now, but they come in two parts: one is the roadmap that lays out CPU release dates and frequencies while the other is a good overview of what code names and model numbers indicate in terms of feature sets.

First we’ll look at the specifications table as it can really help clarify all the confusion surrounding various model numbers, etc.


What you see above is a nearly complete table describing what exactly a Core i5-7×0 processor is and how it differs from a Core i7-9×0 part.  Probably the most exciting bit of information on this table is the mention of Gulftown, Intel’s upcoming 6-core Nehalem based processor that uses HyperThreading to support up to 12 processing threads on a single chip.  As we originally suspected, the specifications show it listed as a 32nm part and staying within the 130w TDP envelope and on the LGA1366 socket.  Sounds like one very expensive upgrade path is going to be available for early Core i7 adopters!

The table also shows Clarkdale, the Nehalem-based CPU with integrated graphics will indeed use the LGA1156 socket (same as Lynnfield), will be dual-core (some with HyperThreading capability and even Turbo Boost) while staying within a still somewhat high 73w TDP.

The desktop roadmap, that covers from Q4 2004 through 2010, is seen here, if you feel daring enough to take on the whole thing at one time:


Because that is a lot to take in all at once, I went ahead and cropped the above roadmap to ONLY show the mainstream and higher desktop section for 2008, 2009 and 2010. 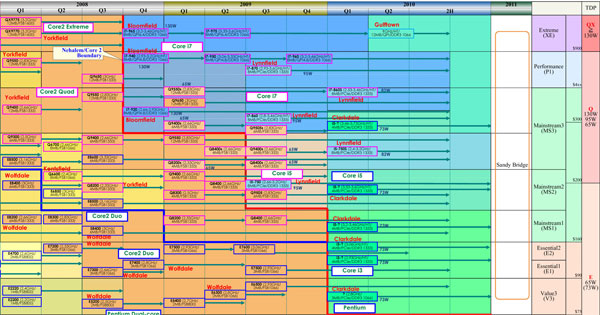 Here you can see all the parts that are already released and available through Q2 of 2009 – including the Core i7-975 and Cre i7-950 parts.  You can clearly see that Intel does indeed have three parts coming up for release in Q3: the Core i5-750, Core i7-860 and Core i7-870.  We in fact found rumored pricing of these very parts today as well.  The Core i7-950, one of only two remaining triple-channel based Nehalem parts, will be replaced by the Core i7-960 come Q4 of this year.  You will also note that the very popular Core i7-920 is NOWHERE to be seen – obviously its fate has been determined and it will be overtaken by what we assume will be the even more overclocking-friendly Lynnfield CPUs.

Even more interesting on this roadmap is that it gives us not only the default clock speed but also the Turbo Mode range as well.  Take a look here:

This tells us that the Core i7-860 should run at 2.8 GHz at stock speeds but could run up to as high as 3.46 GHz using Intel’s Turbo Mode, the auto-overclocking feature introduced with the Nehalem architecture.  If these are accurate, we can easily tell which of these future CPUs are going to be the best for both multi- and single-threaded application use.

Take a look at the Core i7-960 for example: it ranges only from 3.2 GHz to 3.46 GHz using Turbo Mode.  That is only an 8.1% gain in frequency.  The Core i5-750S, a slightly lower power consumption part due out in Q1 of 2010, will jump from a stock speed of 2.4 GHz up to 3.2 GHz with Turbo Mode enabled!  That is a much better “value” in terms of free overclocking as Turbo Mode will punch up the speed by as much as 33%!  Clarkdale CPUs, the dual-core Nehalem parts with integrated graphics on them due out in Q1 2010, don’t seem to scale (in a relative manner) very much with Turbo Mode, though the Clarkdale Core i5 that runs at 3.46 GHz will get as high as 3.73 GHz when auto overclocked.  It makes sense that the dual-core dies would be able to scale to higher clock speeds and we would imagine they might be able to break the 4 GHz barrier pretty easily.

It does look as though this roadmap is incomplete however – it doesn’t show any CPU releases for the mainstream or performance segments after Q1 of 2010.  While possible, I find it highly unlikely that Intel would stay stagnant that long as they await the release of Sandy Bridge in 2011.

We will have more information on future Intel CPUs as we come across it and hopefully we’ll be able to take the same detailed look at the Intel Mobile roadmaps tomorrow.