AMD’s latest broadside in the integrated graphics war may not be over the top, but it certainly adds a lot of zing to a relatively boring market. You still can’t play Crysis with it, but users will be pleasantly surprised by the total package offered by the 785G.

Update August 6, 2009:  It appears that some misinformation has been spread about the 785G.  Apparently the audio portion of the 785G has not been updated from the previous 780G, and it does not in fact support 8 channel LPCM.  I will be doing some work with a couple of different boards attached to HDMI based audio, and see what the different included audio codecs on the motherboard can do.  From some basic information that I received, the audio device on the chipset may be able to pass through 8 channel LPCM from the included audio codec, if that codec supports that feature.  Again, more testing is warranted in this situation, as it is something of a sticking point with HTPCs at this time.

While many have questioned AMD’s acquisition of ATI, and rightfully so, the benefits of the partnership have actually been quite healthy.  AMD certainly appears to have paid far too much for ATI in the first place, but perhaps in the near future we will see the true advantages of the merger?  For right now AMD has lost around $6 billion in overall value (though a lot of it is paper value), but arguably AMD has become a much stronger company with a broader range of products to support the entire company with. 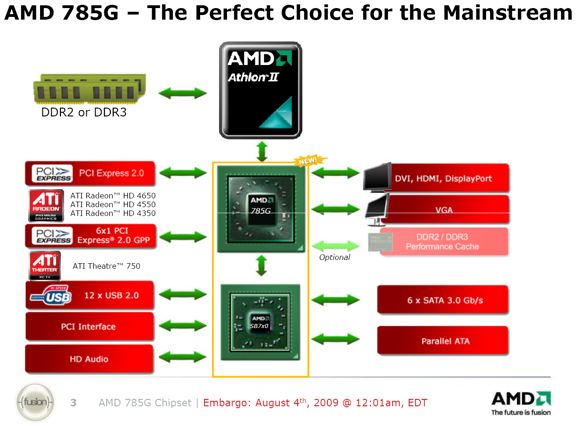 A high level view of the 785G.  Performance Cache, aka SidePort to some, is optional… but likely most every manufacturer will include it.

One of the first products to really show the strengths of the merger was the AMD 690G chipset.  This integrated chipset was a huge step above nearly everything else in the field of integrated graphics.  It was around 20% to 30% faster than the competing nForce 7200 series for AMD processors, and was upwards of 50% faster than the 965G from Intel (not to mention the lack of compatibility issues the 690G had over the 965G).  The 690G was derived from the rendering pipeline of the ATI X700 GPU, but basically cut in half.  This did make the chipset a DX9 SM2.0 compliant part.  It also featured AMD’s first generation AVIVO technology, which improved standard definition video playback.

The 690G proved to be a popular chipset in both motherboards and notebooks.  The real weakness of the platform was the CPUs that were being paired with the 690G.  The Core 2 series were the darlings of the industry in both desktops and notebooks, and the competing Athlon X2 just could not match the overall performance and power consumption.  While the overall platform from AMD could be considered superior overall due to the graphics performance in most games and video applications, other performance numbers were not so hot.  Still, the 690G carved out a decent reputation for AMD and their chipset offerings. 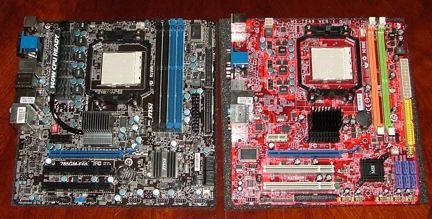 The MSI 785G-E65 is on the left, while an older, preproduction 760G from MSI is on the right.  The difference in quality and components is amazing considering the $30 difference in price.


AMD raised the bar again with the release of the 780G chipset, which proved to be far more competitive with even discrete graphics solutions.  The 780G is a native DX10 architecture with 40 shader units and 1 RBE partition (4 units).  It is also combined with an upgraded AVIVO 2 engine (also referred to as UVD).  The extra performance and feature set of the 780G again proved to be a popular combination in the integrated market.  Unfortunately, the 780G again had to be paired with either an older Athlon X2 (65 nm Brisbane) or one of the newer, and power hungry, Phenom processors (65 nm dual, triple, and quad cores).  The advantages that the 780G brought to the table in terms of power consumption and computational offload were often overshadowed by the big, hot processors (Phenoms) or the underperforming dual cores (Brisbane X2s).

AMD then recycled the 780G a bit, and released the 790GX part.  This is a higher clocked part than the 780G, and it also has the advantage of SidePort memory.  This is usually a single piece of 64 MB or 128 MB of DDR-2 or DDR-3 memory, attached to its own “bus” to the chipset (rather than going through the CPU to main memory).  Most 790GX boards featured 128 MB of DDR-3 running at 1,333 MHz.  This gives an effective bandwidth of about 5.3 GB/sec.  Add this to the memory of the CPU, the graphics core is being well fed with bandwidth.  The SidePort, while adding memory bandwidth, is also very low latency.  When SidePort memory is used, we are seeing an additional 15% to 20% increase in performance.  Not too bad considering how inexpensive that speed of DDR-3 memory is.