There is going to be a bit of confusion due to the almost unfortunate naming of this chipset.  785 is certainly lower than 790, but obviously it is higher than 780.  While the 790GX is still more aimed at the enthusiast market, the 785G is the newer part.  It is time to take a look under the hood of the 785G and see what AMD has given us. 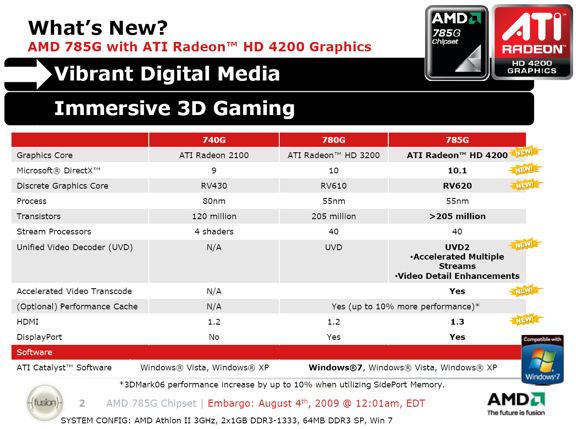 The chip itself is a 55 nm based part manufactured by TSMC.  The 780G/790GX are also 55 nm parts, and they are comprised of about 205 million transistors.  Interestingly enough, the 785G is only slightly higher in the transistor count, but still less than 206 million.  When we look at the added features of the chip, it is interesting that the transistor count did not balloon.  There are likely several reasons for this.  The primary is that there were probably a lot of spare transistors included in the design, so that defective portions (such as the shader units) can be disabled and redundant units can be activated.  The second is a further optimization of the design that also has reduced overall transistor count.  Put together, these two reasons are likely why the 785G has relatively few extra transistors in the overall count, but still encompasses more features and performance.

The big push for this part is that it is a DX 10.1 compliant part.  The previous 760/780/790 parts are all DX 10, but of course AMD’s discrete graphics chips have been DX 10.1 since the release of the HD 3×00 series of cards.  It has been widely rumored that the original R600 (HD 2900XT) and subsequent RV630 (HD 2600XT) were also DX 10.1 compliant parts, but that functionality was never exposed.  If this is true, then it is not much of a leap to say that the increase in transistor count to make the 785G DX 10.1 compliant would be minimal since it is based off of the RV6x0 series of parts.  DX 10.1 does not so much increase visual features, but rather offers more efficient ways to render.  As we have seen with applications which are ported to DX 10.1, the visual fidelity matched that of the DX 10 version, but the framerates see a definite increase. 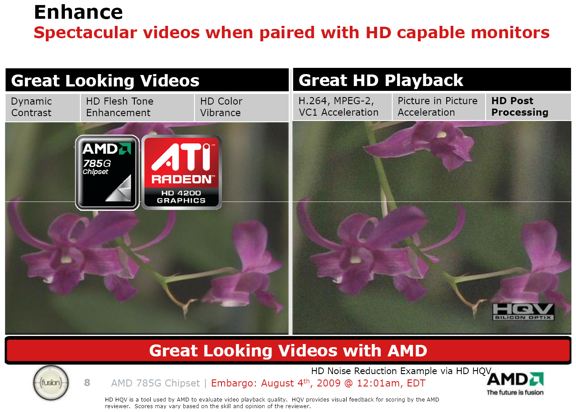 Perhaps not spectacular… but certainly better than nearly anything else in the market.

The 785G also gets an upgrade in the video playback realm.  UVD is upgraded to UVD 2, and it is even more focused on pushing out High Definition video.  Not only does it support the multiple decode formats, but it also adds more post processing routines to increase the quality of video.  This includes dynamic contrast, HD flesh tone enhancement, HD color vibrance, picture in picture acceleration, and further HD post processing support.  These put the 785G up on the level of high end video processors that exist in expensive Blu-ray standalone players.

When it comes to HDTV and HTPC applications, the 785G further separates itself from previous chipsets by supporting the full HDMI 1.3 specification.  The audio portion of the 785G is unchanged from the 780G, so it still does not support 8 channel LPCM.  This is somewhat problematic for those hoping to use the 785G in their HTPC with full uncompressed 7.1 channel support over HDMI.

The next big addition is that of Stream.  AMD is enabling full Stream functionality on the 785G, which allows it to accelerate GPU computing applications.  Applications like Cyberlink’s Espresso, Microsoft PowerPoint, Adobe Acrobat, and Nero’s MoveIt will all support Stream computing either now, or in the near future.  While the 40 shader units will not blow everything out of the water, it will accelerate the content when used with a dual core, or lower end quad core processor.  Once processors get into the quad core/3 GHz range then we see CPU acceleration start to overcome the massively parallel, but far simpler stream units on the 785G. 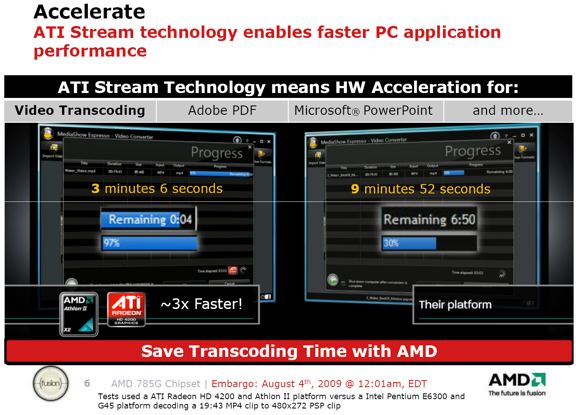 AMD’s tests of the Athlon II X2 250 vs. a Intel Pentium E6300.  Amazing what Stream can do.  Now we need more ubiquitous support.

Power consumption with the 785G part is also improved by more aggressive gating, as well as taking the idle clockspeed down to 60 MHz.  The 780G and 760G from AMD run constantly at 500 MHz and 350 MHz respectively, which pulls a decent amount of power even when idle.  Going all the way down to 60 MHz is pretty impressive from a power savings point of view, and real world results should mirror this quite nicely. 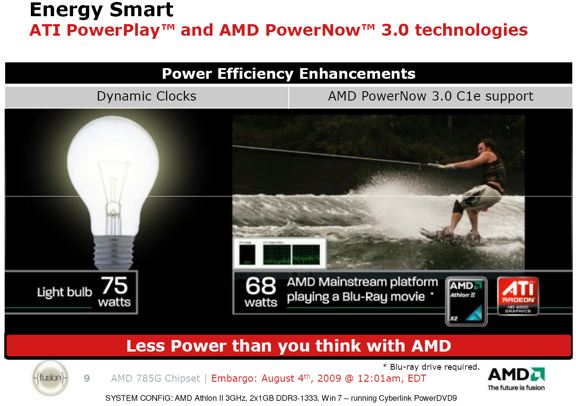 At 68 watts of total power, the entire PC might in fact pull less wattage than a standalone Blu-ray player.


The 790GX does perform about on par with the 785G, but that is primarily because the 790GX is clocked at a much more aggressive 700 MHz.  In DX9 and DX10 content, it should stand toe to toe with the 785G, especially considering that it comes with SidePort memory as standard as well.

AMD has certainly massaged the 780G quite a bit, and the resulting product is quite impressive in terms of performance and features.  AMD is really aiming for the mainstream market where such a product can make quite an impact.  Combined with a quick and inexpensive Athlon II X2, the 785G is a serious threat to Intel and their integrated market.   For a closer look at the MSI 785G-E65, please browse to our preview of that board.