AMD has released another high end processor into the fray, and Intel had better watch out. Sorta. While aimed at the Q9550 and Q9650 parts, the X4 965 is priced at a competitive $245, thereby pushing all of the previous Phenom IIs before it into much more affordable territories. Not all is perfect with this chip, but does its imperfections cause it to fall when facing the competition? Read on…

Progress is a wonderful thing.  Using the wonder of hindsight, I think I am safe to say that AMD has certainly saved its collective bacon with the Phenom II series.  While the original Phenom was a decent product, it just could not keep up with Intel in pretty much any metric.  Power, performance, die size… they were all tipped wildly in favor of Intel’s Core 2 product line.  With Phenom II AMD has significantly closed the gap.  While the Phenom II packs in about double the transistors over the old Phenom, it is actually physically smaller due to the use of AMD’s 45 nm process vs. the much more mature 65 nm process.  The Phenom II now comes much closer in performance to the Core 2 Quad products, the power consumption is right around where Intel is, and AMD has been able to scale the clockspeed on these parts far higher than where the original Phenom was able to go. 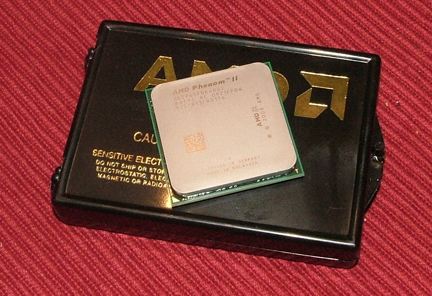 
Today AMD is releasing their newest part, one which will be the top of the line for the foreseeable future (well, until that rumored 6 core desktop part drops, but there is no official word about that).  The Phenom II X4 965 is still based on the Deneb core and runs at a saucy 3.4 GHz.  The memory controller, HT link, and L3 cache still run at the relatively mild 2 GHz.  The previous X4 955 is clocked at 3.2 GHz, so the change does not seem that severe.  Interestingly enough though, the official TDP of the new X4 965 is raised to 140 watts from the 125 watts that the X4 955 sports.

The release today is not a surprise, as everyone knew that it was coming.  What not everyone realized is that AMD has moved its entire lineup in price, so the new X4 965 is priced at $245, where the previous X4 955 sat for quite some time after its release.  I believe quite a few folks would not have been surprised to see the X4 965 debut at $265 or $270, considering that Intel has not made any price cuts as of late.  Luckily for consumers, this is not the case.

More of the Process Talk

AMD has a long tradition of continual process improvements, and we can see the fruits of this philosophy throughout the years of AMD’s products.  Though GLOBALFOUNDRIES has broken off from AMD, they still follow that same route.  Last January, with the release of the Phenom II X4 940, AMD was limited in releasing a part that had a 3 GHz core clock and 1.8 GHz on the “uncore” portions.  Through design and process work, we were able to see the X4 955 released some four months later.  The extra 200 MHz in both core and uncore speed did not greatly affect the TDP of the part as compared to the slower 940.

Just a few weeks ago we saw the release of a “new” Phenom II X4 945 which runs at 3 GHz core and 2 GHz uncore, and the TDP was lowered to 95 watts.  Obviously GF and AMD were able to work together to improve the power and speed characteristics of the Deneb core on the 45 nm process node.  With all of these changes, AMD is able to offer this new, high-end part running at a very respectable 3.4 GHz.  Apparently the bins on these parts are so good (at 140 watts TDP) that they can offer them in quantity at the $245 price point. 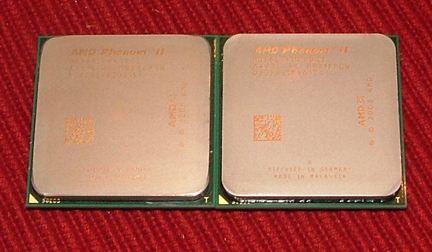 The X4 955 (right) and the X4 965 (left) are indistinguishable.  Except if you look at the power coming out of the wall once you plug them in.

Putting on my speculation cap, I would be very surprised to see a 3.6 GHz X4 ever released.  I would be more inclined to say that we will see the six core parts being released on the desktop, and eventually getting their clockspeeds up to the 3.2 GHz level at some point.  Once we get to that place and time, we are then looking at the introduction of new parts based on GF’s 32 nm SOI process.  What exactly is going to be offered at that point is anyone’s guess (outside of AMD that is).

From all appearances the 3.4 GHz Phenom II X4 965 will be the fastest clockspeed processor out for AMD until we hit the next process node.  This information is again not anywhere close to being official, but it certainly appears to be the case.  I do not think the folks at GF will pull any rabbits out of their hats in terms of what else they can do with their 45 nm SOI process, but it also would not surprise me to see a future X4 965 being de-rated to 125 watts TDP some months down the road.