Considering that the core is clocked 200 MHz faster than the X4 955, we are going to expect an increase in power consumption.  AMD told us that at idle it is unlikely we will see much of an increase, but at load we should see around a 10 watt increase.  Well, my results did not really follow that.  Consider that the X4 955 and 965 are on different motherboards, but in comparative testing with the same CPU on those motherboards, the Asus has about a 3 watt advantage over the Gigabyte board.  These results are far higher than 3 watts.

The new X4 965, or at least the sample I have, certainly sucks down the juice and the results do add credence to AMD’s 140 watt TDP that they are giving this chip over the 955.

I was expecting to hit 4 GHz with this product on the Gigabyte board.  I was sorely disappointed.  I was able to hit 3.7 GHz with a pretty hefty 1.48 volts.  In the AMD OverDrive program, at that speed and voltage, it was reporting 67 C at load.  I have a pretty decent cooling setup, but this chip ran hot.  Really hot.  The X4 955 on the same setup usually idled around 38C and went to 55 C at load and overclocked.  I was not willing to push this chip farther, as I would have easily seen temps in the 70 C+ range.  The chip is really only spec’d to operate at a max of 65 C. 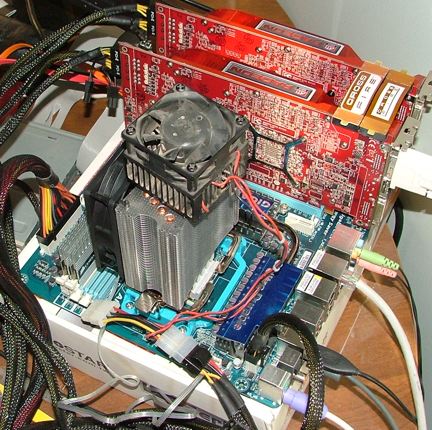 I dub thee… Frankencooler!  Because the chip was running so hot overclocked, I stuck a 55 watt peltier cooler on the top fin to try to cool it down.  The results were… disappointing.  Even with a beefy cooler with good thermal compound, the Phenom II X4 965 running at 3.7 GHz was hitting 67 C at load.  Rather toasty for a CPU.


I do not currently have other forms of cooling that might solve the temp problem, but it does leave me to wonder if this particular chip would have been considered a TWKR if AMD had created a mass market product around that idea.  If you remember correctly, the TWKR chips have quite a bit more leakage, but can clock ridiculously high when given proper cooling.  I did not have access to LN2 during the testing of this part, but considering how hot it runs and how much power it consumes vs. the older X4 955, I seriously wonder if this particular chip could overclock a bundle under the right circumstances.  More testing is obviously in order.