PC Perspective hosted its first ever hardware workshop at this year’s Quakecon 2009 and it was an amazing event. The workshop included overclocking demonstrations by a couple world-renowed overclockers using AMD’s Overdrive utility, the first-ever public viewing of ASUS’s new P55 motherboards, and a DirectX 11 demonstration from AMD. We also gave away thousands of dollars in prizes! Almost everyone left with something from our workshop and several attendees thanked us and our sponsors for putting on the workshop too. 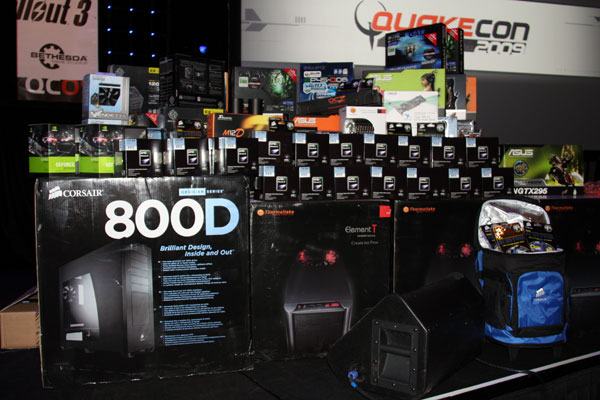 Here’s the mammoth amount of prizes we gave away at our hardware workshop this year. Thanks goes out to all our sponsors, including AMD, Cyberpower, ASUS, BFG, NVIDIA, Gigabyte, Corsair, Thermaltake, Galaxy, Antec, OCZ Technology, and Seasonic for providing over $20,000 in prizes and t-shirts! We’d also like to give a big shout out to the Quakecon staff and audio/visual crew who provided us with everything we needed to make the workshop a world-class event. We couldn’t have made this event happen without their support. 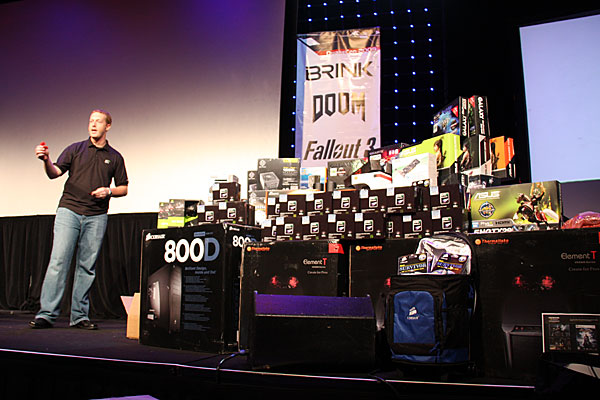 Our Editor-in-Chief Ryan Shrout kicked off the event and showcased the mountain of prizes we had on stage, which drew raging cheers from all of the workshop’s participants. We pulled raffle tickets throughout the workshop and gave away everything seen here, as well as a $5,000 computer from Cyberpower! 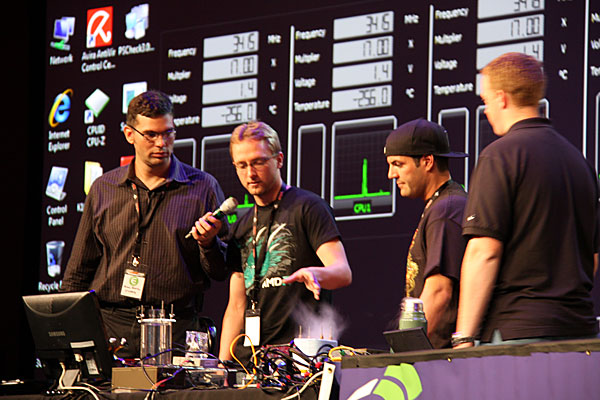 After Ryan’s initial comments, we moved over to AMD’s portion of the workshop, which featured two well-known overclockers named Sami “Makinen” Macci and Vince “K|ngp|n” Lucido who gave an overview on basic overclocking with AMD’s newest overclocking utility called AMD OverDrive. They used LN2 to push AMD’s Phenom II X4 965 Black Edition processors to over 5.5GHz at our workshop. (We heard toward the end of Quakecon that they were able to get these processors close to 7GHz, which is the world record for this CPU. More to follow if we can confirm this with AMD.) 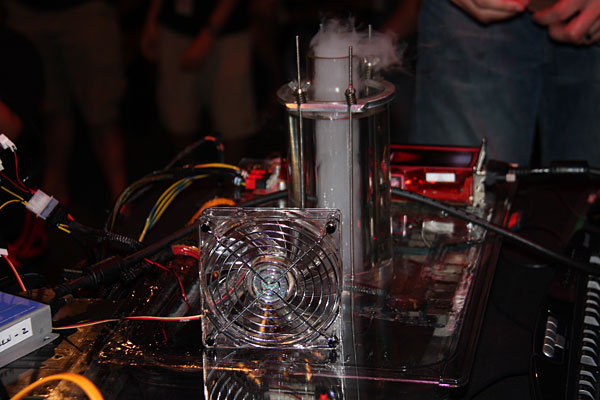 Here’s a couple shots of their overclocking rigs with their custom LN2 pots. I’ve never seen a clear pot like this used before. 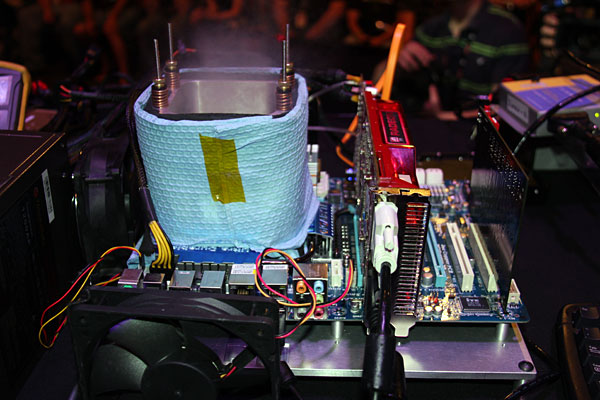 This is the second overclocking system they had displayed at the workshop. This looks like a more traditional LN2 pot, and I believe this is the newest pot that K|ngp|n sells on his website. 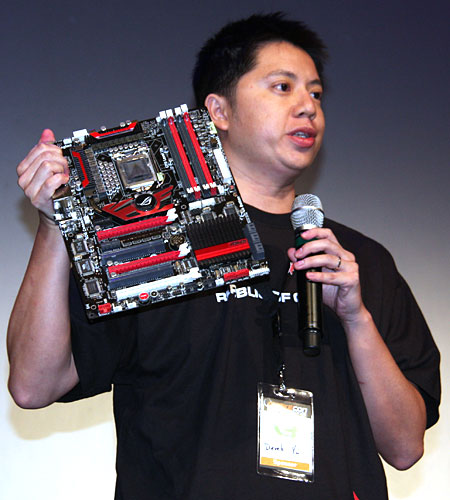 Our friends at ASUS brought by a couple of their P55 motherboards straight from the production line to show to our workshop attendees. This P55-based Republic of Gamers Maximus III Formula supports the upcoming Intel Core i5 series processors and features 19-phase power circuitry and four DDR3 DIMM slots (in dual channel) with its own 3-phase power. 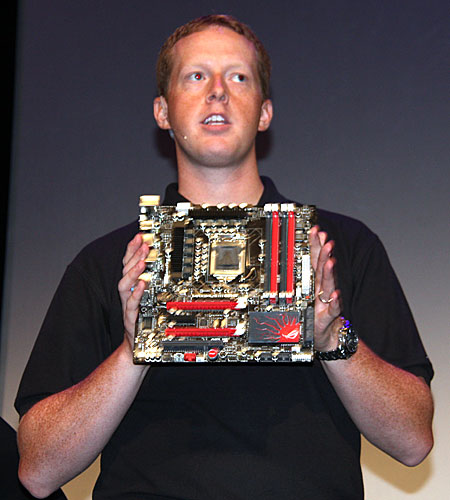 Ryan helped ASUS showcase another one of their P55 Republic of Gamer boards and explained the new features available with the P55 chipset. 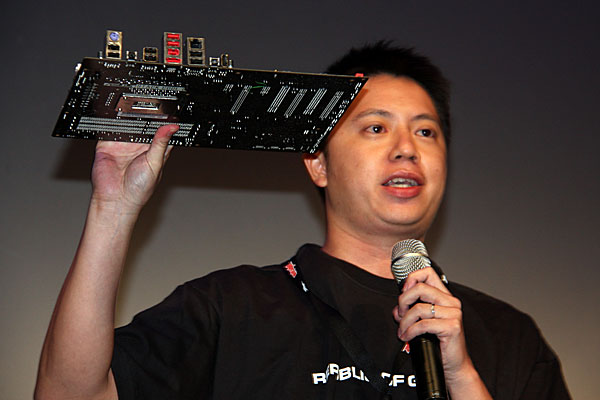 There’s a new hardware-based feature called RoG Connect that users can access through the back I/O panel. The RoG Connect port allows users to connect the board to a second system for real-time hardware monitoring and tweaking. Pretty sweet for those extreme overclockers and enthusiasts. 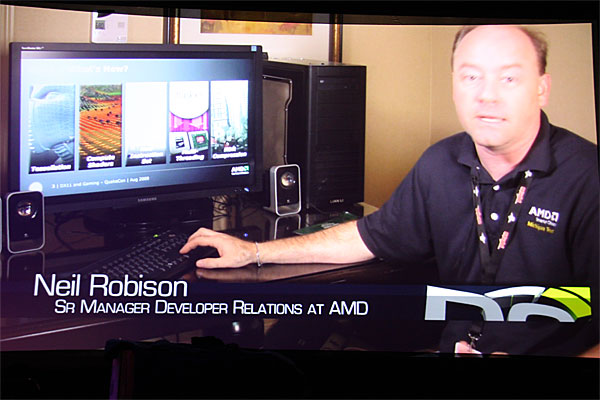 Neil Robison, AMD senior manager of developer relations, gave us a quick demo of the new features in DirectX 11, which we videotapped at Quakecon to show at our workshop. This post has all the info and photos we received on DirectX 11 from AMD during our visit to Quakecon, including the full-length video shown at our hardware workshop. 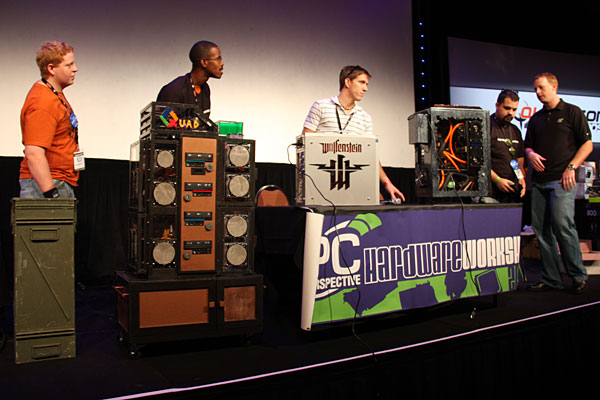 After the DX 11 demo, Ryan brought all our Quakecon 2009 Case Mod Contest finalists up on stage to discuss their mods and to have the audience chose the winners. There were two categories: pre-fabricated cases and custom cases. 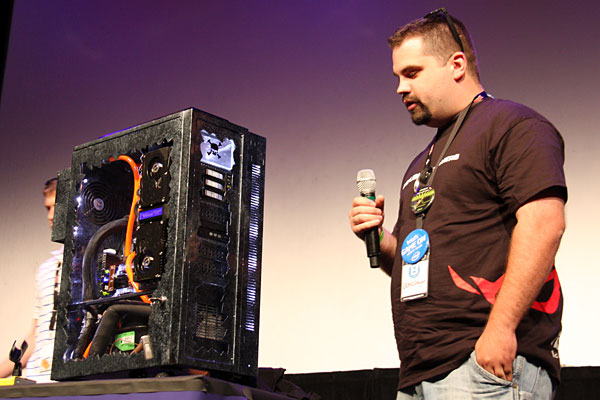 In the pre-fabricated case category, this mammoth all-steel contraption won by a land-slide vote over the Wolfenstein case. It has a Vapochill phase change cooling system, custom lights, two lighted Raptor hard drives, and custom paint to round out the case’s grungy theme. 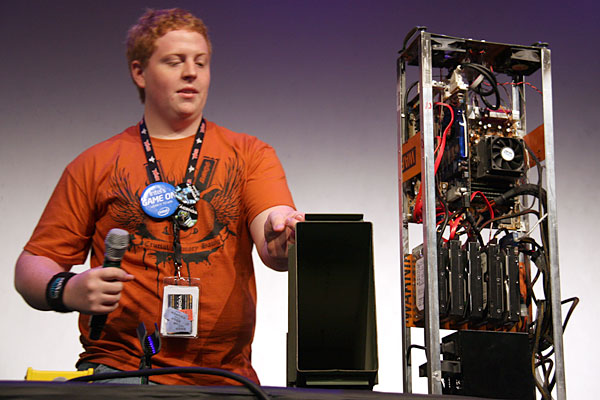 In the custom case category, this full-size ammo case won for its creativity and design over a heavily-favored Quad PC case. The judges liked this case for its ingenuity as well as the craftsmanship of the inner frame that holds all the components perfectly in the ammo case. There’s also awesome cable management and it looks like there might even be room for a full-size ATX motherboard. Great job. 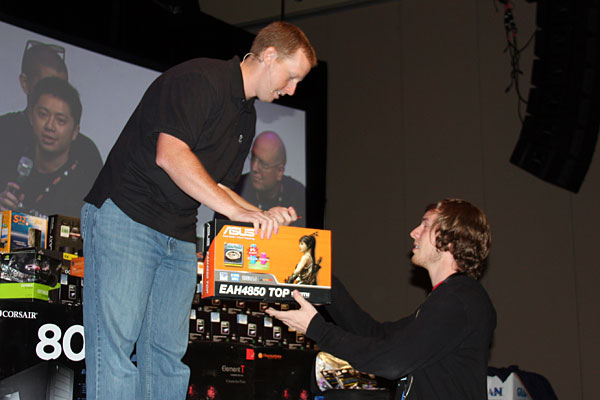 After the case mod contest, Ryan started giving away more awesome prizes, including an ASUS EAH4850 video card for this lucky attendee to take home. 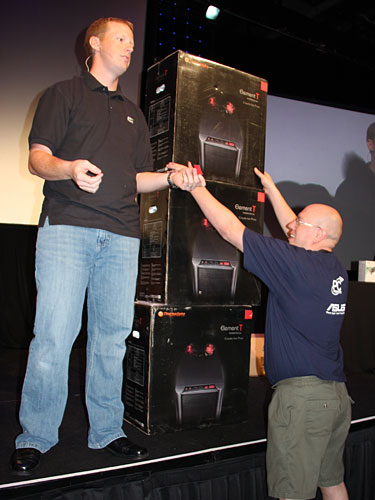 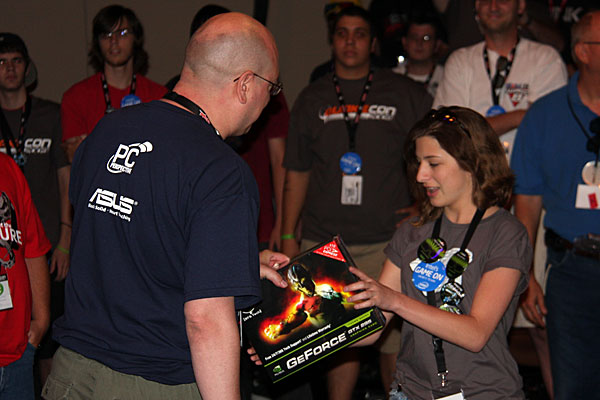 Another surprised workshop attendee got hooked up with a BFG GTX 295 video card when her raffle number was called. 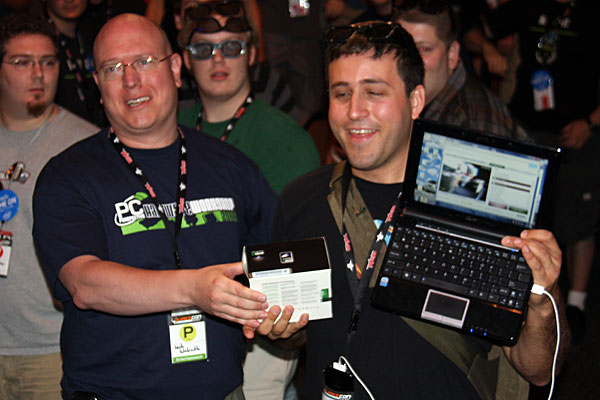 This gamer named Gabe McGuinness was streaming the workshop on UStream.com from his ASUS Eee PC using his iPhone so we had to hook him up with an AMD Phenom II X4 965 processor. 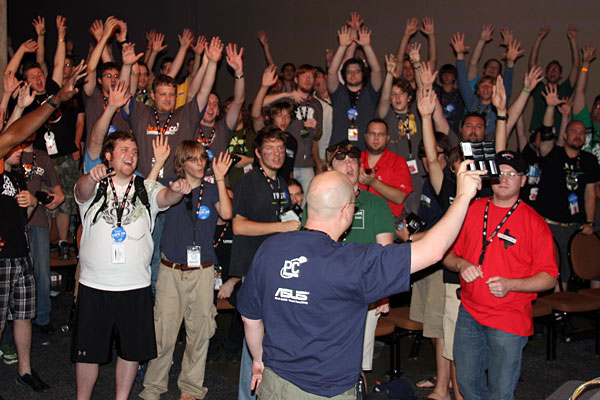 The giveaways continued as eager workshop attendees went wild for prizes like this 6GB DDR3 kit from Corsair. 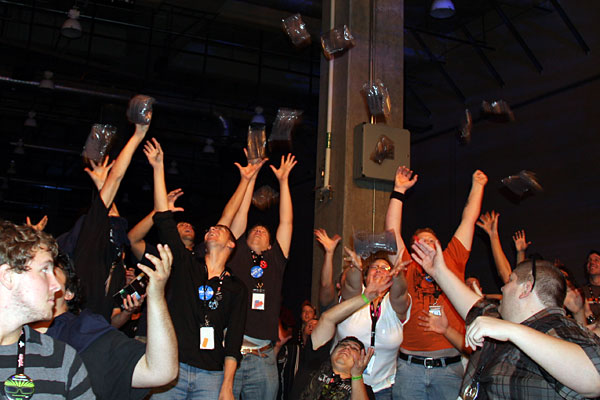 At the end of the workshop, we had so many t-shirts left over that we started throwing them out to the crowd by the armful. 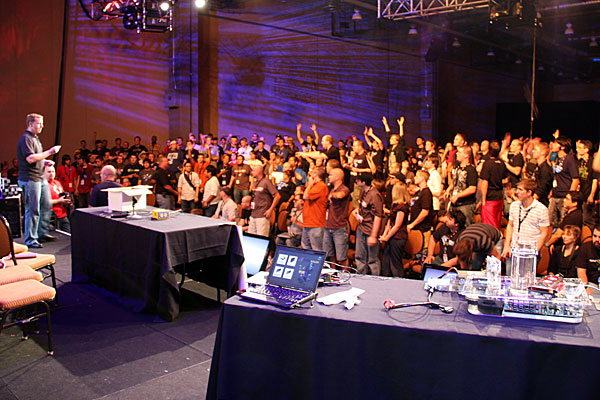 After the last prize was handed out, we concluded the workshop and thanked everyone for attending and being apart of our first event ever at Quakecon 2009. We hope next year will be just as successful as this workshop was for our fans and website.