Propus to the Rescue

The latest quad cores are relatively tiny as compared to their older brothers and the competition from Intel. While these are not barn burners when it comes to performance, AMD is hoping that the combination of available performance and budget pricing will prove to be irresistible to users and OEMs alike.

AMD has a problem.  Well, they have several problems, but this isn’t necessarily the place to talk about them all.  The original problem that I am referring to is the fact that they have a monolithic quad core die with a total of 8 MB of cache, all of which take up around 264 mm squared on a 45 nm process.  That does not sound so terribly bad, unless of course we start looking at this product and compare it to its peers.  The latest Core i5 and i7 models based on the Lynnfield chip from Intel are very fast, and they are around the same size as the Phenom II.  So other than drop the prices on the current Phenom II parts, what else could AMD do?

It is no secret that AMD is at a distinct disadvantage from Intel.  The company is far smaller, their quarterly profits are currently non-existent, they recently had to spin off their manufacturing arm, and their R&D budget for processor development is far, far lower than what Intel is able to throw at their engineers.  Other than that, AMD is in pretty good shape.

So that is a bit tongue in cheek, but when we look overall at the company, we can see some marked improvements.  Their Phenom II series are now much more competitive with what Intel has to offer, and they are able to sell products above the $200 mark.  This is a significant improvement over just a year ago when their top quad part was selling for around $169, and the majority of their lineup was under $100.

AMD has also been making some real headway in the integrated chipset market.  The older 780G is still a top seller, and a good foundation for many budget desktop computers.  The latest 785G has improved performance a bit, and has also really helped in advancing new and usable features into the integrated space.  The graphics portion of the company has done well with the HD 4000 series of standalone cards, and their upcoming DX 11 lineup will redefine the graphics industry throughout the rest of this year.

Considering that AMD is the second best CPU manufacturer/designer in the world, and they are #2 in shipments, we have to give credit where it is due.  AMD has survived in the face of extreme competition with Intel, and with the latest influx of money the company has received from their financial dealings this year, they should be around for some time to come. 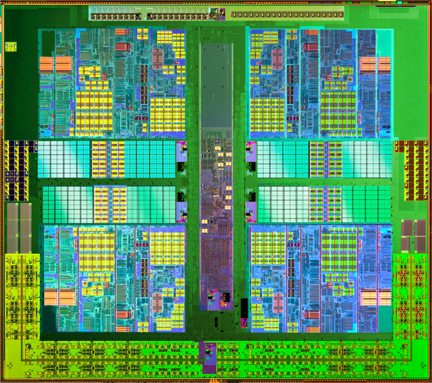 The Athlon II X4 is a new design from AMD, but still based on the Phenom II.  No L3 cache makes it a much smaller product, and takes some of the complications out of manufacturing as well.

Going back to the original problem though… what is AMD going to do in the face of the latest Lynnfield processors from Intel?

AMD is around 9 months behind Intel when it comes to advanced processes.  This may change a bit now that GLOBALFOUNDRIES (from now on referred to as GF) is its own entity, and will be taking on new customers to keep foundry space occupied and to help pay for advanced R&D on process technology.  So shrinking the Phenom II from 45 nm to 32 nm is a no go so far, as not even Intel has a full 32 nm product available.  So how does AMD compete and still make money?

The answer to that one is to design a much more size optimized Phenom II.  Most engineers say that around 80% of an X86 design is dedicated to achieving that last 10% of performance.  AMD scratched their heads a bit and decided that it might be worthwhile to cut out the 6 MB of L3 cache from the Phenom II design, and rework the architecture a bit so that it won’t absolutely require it.  The Athlon II is the culmination of that endeavor.  The Athlon II X2 that was released some months ago is a standalone product comprised of two Phenom II cores with 1 MB of L2 cache a piece.  Though the L2 is enlarged from the other Phenom II parts, the Athlon II X2 is still one of the smaller dual core dies around at 117.5 mm squared (though the Core 2 45 nm part is 107 mm squared).  And performance did not suffer too terribly much as compared to the much larger Phenom II X2 that was released at the same time. 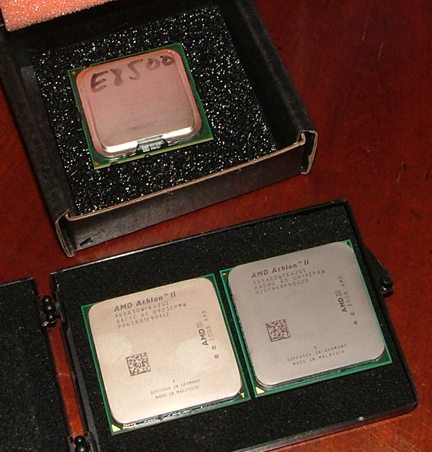 Some Athlon II X4 die are actually Deneb based, but with the L3 cache disabled.  Supposedly ACC can unlock the extra cache if a user is lucky enough to get the right sample.  I was not lucky with mine.


The new Athlon II X4 is, I believe, the smallest quad core X86 processor around.  At 169 mm squared it is smaller than even the Core 2 Quad (2 x 107 mm square).  This means that AMD can pack a lot more dies on a wafer with the Athlon II X4, and they can sell it at a far lower price than the 264 mm squared Phenom II.  Excising the L3 cache also allows AMD a lot more leeway in the TDPs of these processors, and bins are likely not nearly as tight as what we may have seen with the Phenom II when it was originally released.  The L3 cache eats a lot of power, and is a significant source of heat for these modern processors.

The Athlon II X4 does include all of the other features of the Phenom II.  Dual channel memory controller with DDR-3 support, 128 bit SSE/FP unit, HT 3.0, and a host of other tweaks and optimizations that were introduced with the original Phenom II.

AMD certainly cannot compete head to head with the i7 860 and 870 processors, but the top Phenom II X4 965 can trade blows with the i5 750.  So while AMD is likely to lower prices sooner rather than later on their Phenom II lineup, they hope to make up that lost revenue by offering this much more svelte Phenom derivative at bargain prices.  ASPs will likely go down because of this, but overall revenue may increase if the Athlon II X4 is embraced by the industry as a highly sought after budget part to be combined with a 785G based motherboard.