The Tigris and “Codename formerly known as Congo” are two new notebook platforms that aim for the mainstream and ultra-portable marketplaces. While we have seen these products before, the combination of tuning and manufacturing changes allows them to fit into the mobile market. The extra boost could give AMD a nice set of weapons to further improve their marketshare in the mobile space.

Yesterday AMD introduced two new mobile platforms that they are hoping will help expand their presence in the mobile sector.  These releases address the mainstream market as well as the ultra-thin (though not quite net book).  While AMD has struggled to compete with Intel in the mobile space, their CPU offerings have taken a back seat to the Core 2 series of chips.  Where AMD has thrived though is in the quality of their integrated chipsets.  With these new offerings AMD is expected to be a lot more competitive with the Core 2 products, and on the ultra-thin they hope to totally outclass Intel in this increasingly important sector.

They Don’t Call Me Congo Anymore

The ultra-thin product was once code named Congo, but after a blogger at the DailyKOS accused AMD of tacitly supporting human rights abuses by naming their platform after a river in Africa, AMD dropped the Congo codename.  Perhaps said blogger will now go after the late Michael Crichton and make him change the name of his book and subsequent movie.  But I digress.  What AMD didn’t drop was the hardware that was going to be used.

AMD is not a fan of the net book craze, and they believe that fully featured and functional laptops with long power life and a smaller footprint will overtake netbooks in the near future.  I tend to agree with them, as the functionality of many net books leave a lot of users begging for more.  Those who bought these have over time become disappointed in what they can actually do.  Now that we are seeing fully featured laptops getting near the size of net books, I think we will see a lot more people switching back.

The new Vision branding is a fair shade more interesting than previous iterations.  It should help simplify choices for consumers in the mobile space.


Intel’s Atom has been the go-to processor for many of these netbooks and ultra-portables, but the disadvantages it brings to many workloads due to its performance is also something that many users have complained about.  Users are also very unhappy about the Intel 945G integrated graphics which comes with nearly every Atom based netbook out there.  AMD hopes to capitalize on this sentiment with their latest ultra-thin platform.

The basis for the new ultra-thins is the AMD Turion Neo X2.  This is still a 65 nm processor, which is odd considering that AMD is really pushing 45 nm right now.  This is a dual core processor based on a highly modified Rev. G Athlon core.  This basically means that it overall still resembles the Brisbane series of processors, but with some heavy changes to the memory controller and design changes which allows it to sip power and produce a small amount of heat.  The L625 processor runs at a decent 1.6 GHz and has a TDP of 18 watts.  This is well above that of Intel’s dual core Atoms, which are rated around 8 to 10 watts.  But the performance from this out-of-order Neo processor is far above that of the in-order dual core Atom 330.

The Turion Neo X2 is also provided in BGA form, so it does not use a traditional socket.  This will allow the chip to be soldered right on the laptop motherboard, which allows for lower profile designs.  Users certainly will not be able to upgrade their CPU, but that has never been a concern in laptops.

The big upgrade that AMD is really pushing is that of the integrated graphics.  The Intel 945G was a fairly poor choice for Intel in combining with their Atom.  The 945G is based on the 130 nm process node, and it was very poorly received even when it was new.  It is barely a DX9 compliant part, the performance in 3D graphics is pretty unacceptable, and its video playback support and performance is actually a bit worse.  The 945G does run a bit hot, and it is rated at 22 watts TDP.  It does seem somewhat counterintuitive to match an 8 watt TDP CPU with a 22 watt chipset.  AMD hopes to really trump Intel with their latest mobile oriented chipset. 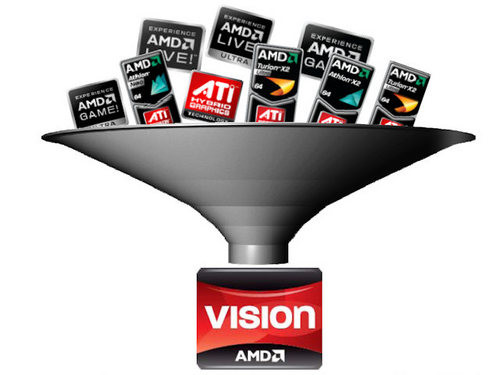 It is nice that all of these other sticker programs can now be consolidated under Vision.


The RS780M is still based on the same chipset that powered the desktop 780G integrated graphics.  However, it is again power optimized as compared to the desktop part.  It is based on TSMC’s 55 nm process, and the north and southbridges have a combined TDP of 15 watts.  Because it is based on the 780G chipset, it has all the goodies including Avivo HD/UVD and full DX 10 support.  Plus the combined TDP of the CPU and chipset is within 3 watts of the Atom 330 and 945G combo.

While most users will not be running the latest DX10 games on this platform, they do have the option to.  Most quality settings will need to be lowered, but the RS780M can handle most gaming applications, and the power of the dual core Neo L625 will also give enough headroom to enjoy most games (such as Sims 3) without bogging the user down.  The big push with this combination is of course video.  Now that we have so many sources of high definition video, and storage/access/portability of these types of media is so superfluous, it makes sense for most ultra-portables to be able to handle them.

The Atom/945G combo is not adept at high definition video at all.  With applications like Hulu Desktop (for those of us in the US), as well as other flash based movie mediums, the offload capabilities of the 945G cannot keep up, and the pure processing power of the Atom is not adequate for these types of workloads.  The combination of the RS780M and Neo X2 processors will alleviate this particular issue.  Testing has shown that most high definition media types can be played back at full 1080p with the processor running around 25% to 30% load.

Something that I believe we are going to see more and more of is HDMI outputs on many of these ultra-portables.  Having such a laptop to do web browsing, email checking, basic productivity is a given.  But being able to plug the laptop into a full sized 1080p LCD and being able to further do work and watch videos at both home and on the road will be a tempting reason to get an ultra-portable that can actually drive it. 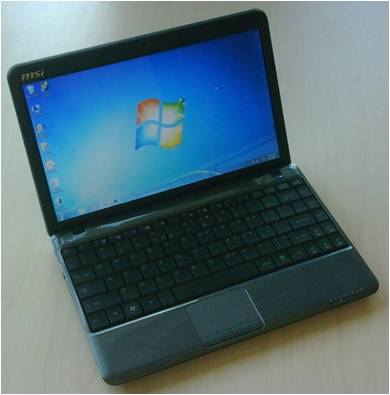 Gratuitously ripped from Pat Moorhead’s blog, this is one of the first examples of a laptop based on the 2nd Generation Ultra-Portable Platform from AMD.  This is a MSI X-class laptop running Win7.


It is somewhat disappointing that AMD decided to use the older “Conesus” processor for this platform, but it is not necessarily a bad thing that they did not use a 45 nm product for it.  Conesus is highly modified to be very power efficient, and it still is able to perform on a per-clock level as previous generation Athlon X2s.  The 32 watt TDP of the CPU + chipset is again within 2 watts of the Atom 330/945G combo.  Considering the performance and feature upgrade the AMD combo has over its competitor, those 2 watts are justified.  Of course, this is disregarding the differing ways that AMD and Intel have of figuring out TDPs.  Still, all of that aside, the AMD platform is not at a real disadvantage when it comes to power consumption, but it has a significant advantage in performance and usable features.