The GIGABYTE GV-R587D5-1GD-B and GV-R585D5-1GD-B feature ATI’s latest 2nd Generation TeraScale graphics engine, boasting the power of more than 2 teraFLOPS with 1600 and 1440 stream processors respectively. With 1GB GDDR5 memory, the GV-R587D5-1GD-B and GV-R585D5-1GD-B provide twice the data per pin of GDDR3 memory at the same clock speeds. Benefiting from ATI Eyefinity Technology, every gamer can run up to 3 displays from a single graphics board and expand the field of view across all displays. End-users can enjoy the ultimate gaming experience with innovative “wrap around” multi-display capabilities with ATI Eyefinity Technology. Furthermore, using ATI Stream Technology, every user can easily unleash the massive parallel processing power of GPU for physics, artificial intelligence, stream computing and ray tracing calculations, and tackle demanding tasks like video transcoding with incredible speed.

To respond to every power gamer for a no-compromise HD gaming experience, the GIGABYTE GV-R587D5-1GD-B and GV-R585D5-1GD-B are the first to offer full support for Microsoft DirectX 11 for life-like realism and stunning 3D gaming effects. Gamers can get striking 3D visual effects and dynamic interactivity with DirectX 11 support, including features like Tessellation, HDR Texture Compression, Multi-threading and DirectCompute. Microsoft DirectX 11 brings new levels of visual realism to gaming on the PC and gamers can dominate the competition with GIGABYTE GV-R5800 Series graphics cards.

In order to provide the best digital audio/video interconnection between a computer and display monitor or home-theater system, the GIGABYTE GV-R587D5-1GD-B and GV-R585D5-1GD-B are capable of outputting DispalyPort signals. The new generation DisplayPort interface supports higher resolutions, richer color depth, and increased refresh rate performance, delivering 10.8Gbps of bandwidth over previous generations of connectivity options such as DVI, LVDS and VGA. With added DisplayPort connectivity on the GV-R587D5-1GD-B and GV-R585D5-1GD-B, PC gamers are able to play all the latest games on their large-screen home theater displays, providing an audio and visual experience unmatched by any of today’s console gaming systems. Furthermore, the GIGABYTE GV-R5800 Series are equipped with ATI PowerPlay technology for breakthrough power and consumption, maximizing performance per watt by delivering the highest level of high performance when needed and conserving power when the demand on the GPU is low. 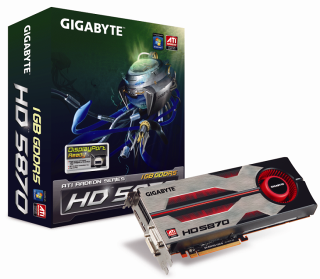