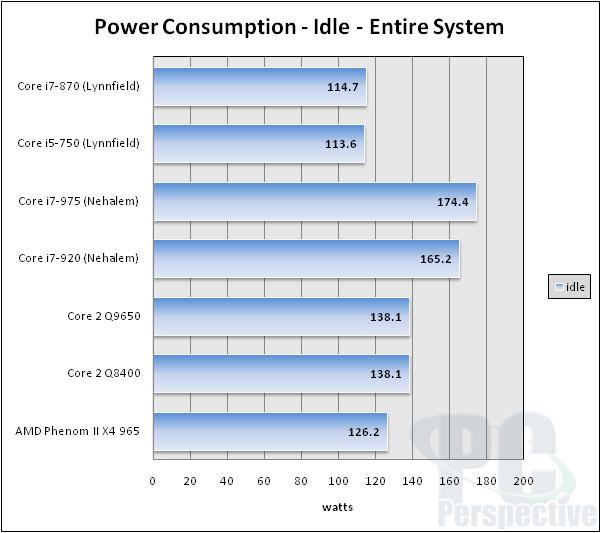 Idle power consumption is still easy to deal with – here you can see that the new Lynnfield parts are doing a VERY good job of shutting down when they are not needed.  They easily use the least power at idle than any other platform available. 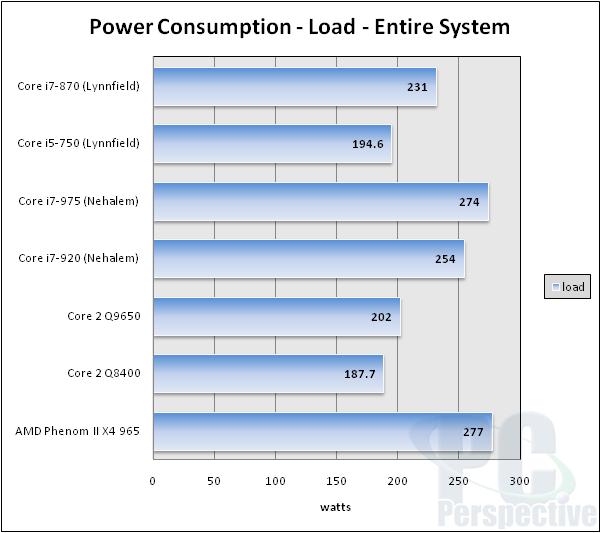 For our fully loaded testing, we used Hyper PI and found not the HIGHEST power draw from the processor during the test but rather found the STABLE MAXIMUM power draw during the test – where did the CPU power consumption settle at during the benchmarking process for the longest period.  What I found was that both the i5-750 and the i7-870 Lynnfield CPUs are incredibly efficient, using less power than even the Core i7-920 Nehalem processor and platform.  The i5-750 actually uses less power than the Intel Core 2 Q9650 system under the same loading conditions.

Unfortunately for AMD, the Phenom II X4 965 finds itself as the MOST power hungry CPU we tested, even over the Core i7-975! 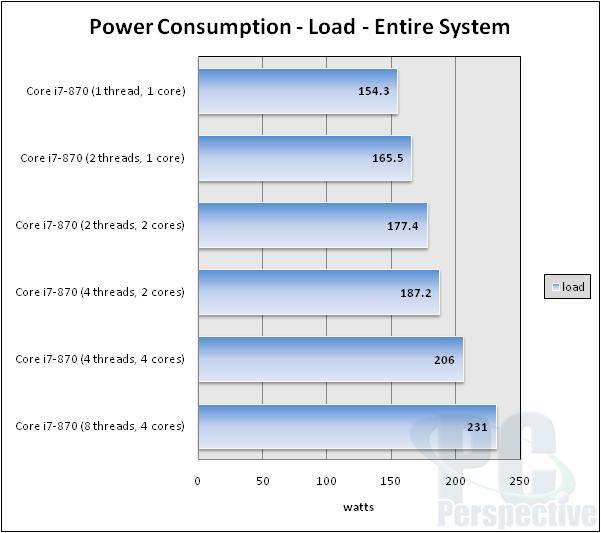 This is a very interesting test I setup to demonstrate how the software side of computing can effect power consumption.  While above I showed you fully loaded systems (4 or 8 threads) this time I walk up the ladder with an 8-thread capable Core i7-870 processor to see how numbers of threads and where those threads are located affect power consumption.

Take look at the 2 threads, 1 core result (165.5w) and the 2 threads, 2 cores result (177.4w): the first shows us how much power the CPU uses when the Hyper PI application sets both threads CPU affinity to the first physical core where as the second result shows us power consumption when the threads are manually placed on different cores NOT utilizing HyperThreading.

We did a similar test for 4 threads on 2 cores or 4 cores – the results are similar – using all four physical results in additional power consumption as we would expect, though the performance is better when all four cores are taken advantage of.  We also see with the last two results that HyperThreading does indeed increase the CPU power consumption dramatically: 25 watts or 12%. 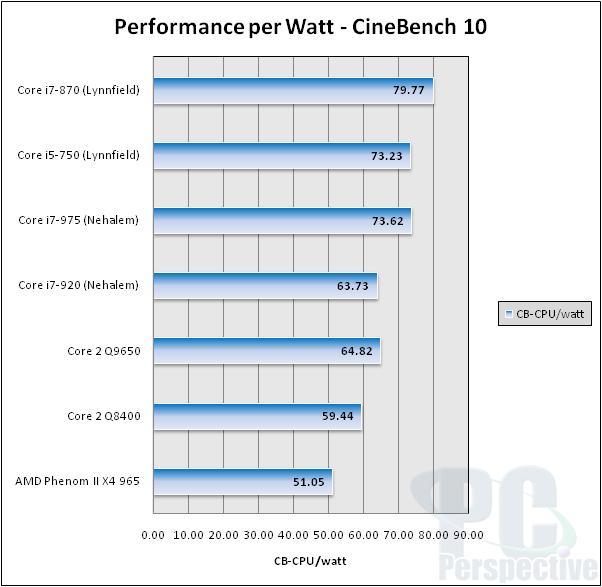 In our CineBench 10 results we are looking at the multi-threaded performance and thus the fully loaded power consumption load.  Lynnfield makes a very impressive entrance to this test by taking the top two spots in terms of performance per watt.  In fact, the results scale almost perfectly down the graph as the Nehalem parts come in as the next most efficient processors followed by the Core 2 parts and finally the Phenom II X4 965 with its dismal 277w load rating. 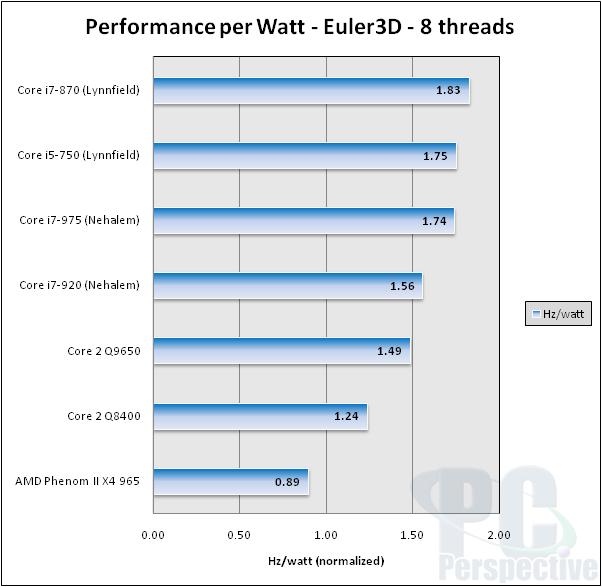 Again the two Lynnfield processors are EASILY the most efficient in Euler3D. 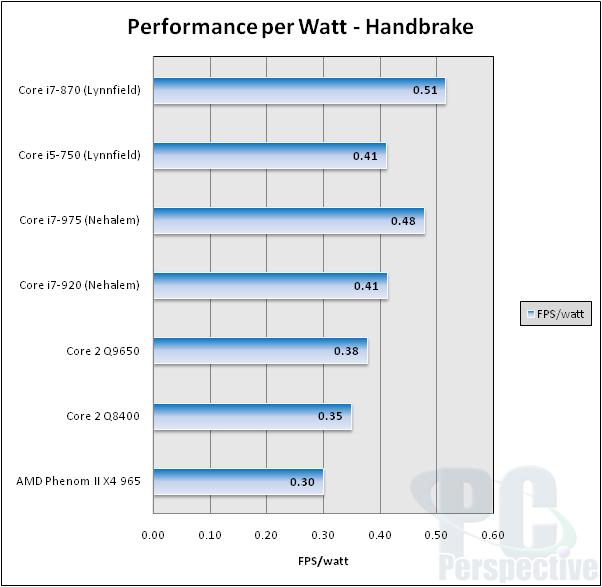 In Handbrake the only major change from the previous results comes with the Core i5-750 – it loses some efficiency to the Core i7 parts as HyperThreading proves to be a very effective way of improving performance in terms of power consumption. 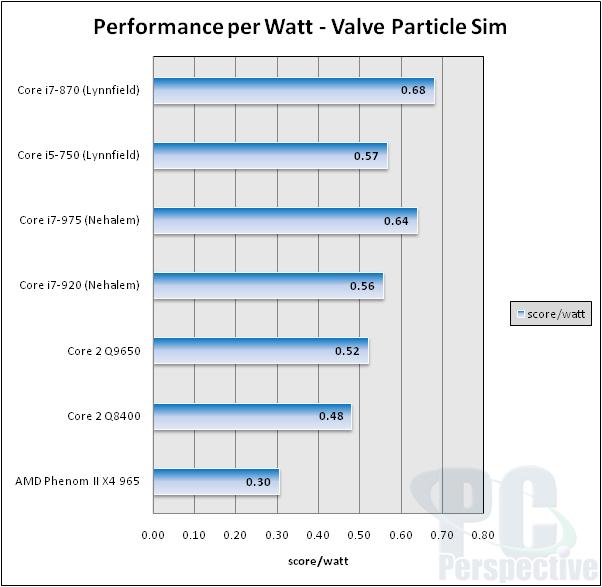 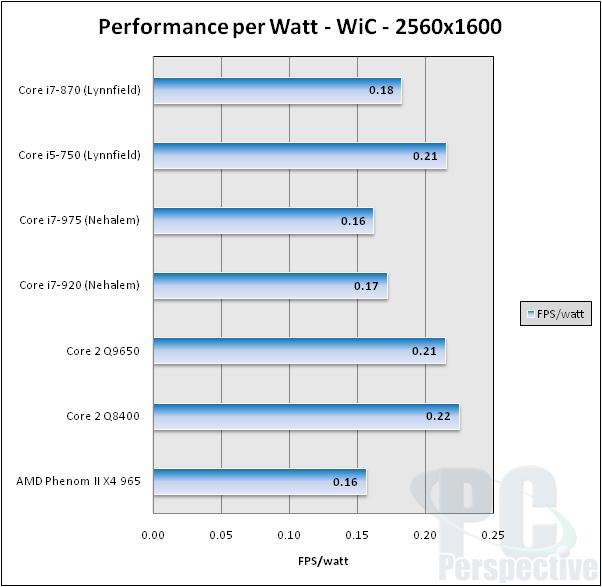 Now in gaming, things get interesting.  The Core i5-750, Q8400 and Q9650 are the highest rated performance-per-watt winners in World in Conflict.  Since the frame rates for all of our tests in gaming were proving to be very similar across the board it obviously makes sense then that the lower power consuming parts are going to come ahead in this metric. 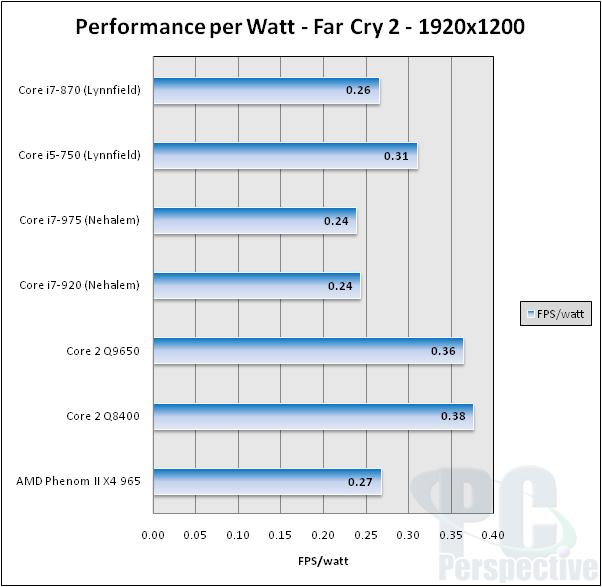 In our last test, the two Core 2 parts take the lead here though the pair of Lynnfield CPUs stay ahead of the Nehalem counterparts.

It should go without saying now that the Intel Lynnfield release is a great step forward in not only performance for your dollar but also for power efficiency as noted in the above results.