A GTX By Any Other Name…

Before AMD unleashes their latest foray into the graphics market, we have the chance to look at the current fastest, single GPU video card around. MSI has differentiated their product with a unique (and surprisingly effecting) cooler which adds to the value of their offering. While we can’t prognosticate about how well it will fare against upcoming products, we can see how well it performs against what is available today.

There are few things more enjoyable than opening up a package with a new video card inside.  Of all the components in a computer system, it is most often the video card that can give the greatest feeling of increased performance.  In fact, it is likely the most tangible of upgrades, as the results of upgrading a video card can be seen with smoother frame rates and increases in resolution and levels of AA in our favorite gaming applications.  We also see increases in capabilities, whether it is Folding or running the latest DX10 game in full DX10 mode. 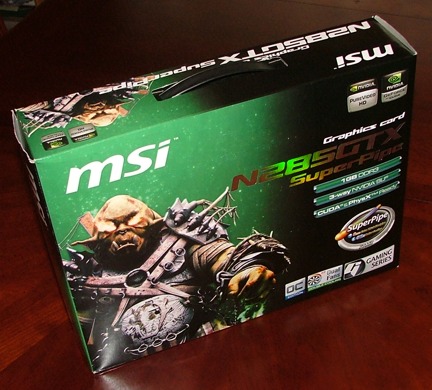 This is actually a much smaller box than those I have seen over the past few years.  Remember the briefcase sized boxes that were introduced with the GeForce 6800 series?

Considering how fast the graphics industry moves, there are always going to be upgrades available in a short period of time.  Unless it is a seismic shift in graphics technology, there rarely is a “bad time” to buy a new video card.  Plus the benefits of a new, high end video card cannot be easily argued away.  The top end cards that we have available now can drive most applications at 2560 x 1600 resolutions with differing amounts of quality settings enabled.

When I was writing at my previous site, I rarely had the chance to get my hands on the latest and greatest video cards.  In fact, the last time I had been included in a major release was back in the GeForce 4 Ti 4600 days.  So when I came into PCPer, within the first six months I was able to lay hands on a high end video card that was sent to me so I could help Ryan out with some of the non-traditional graphics tests (namely video transcoding using CUDA and Folding@Home).  The reference GeForce GTX 280 arrived at my doorstep, and because I am truly an enthusiast, it was a very good day at the Walrath residence.  The card was impressive to say the least.  It was big, it was powerful, and it made very short work of the previous high end card- the GeForce 8800 GTX/Ultra. 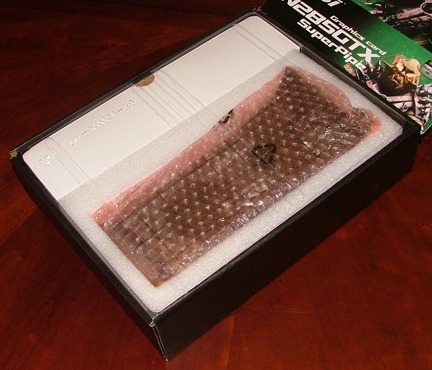 It is not Ft. Knox, but pretty close.  MSI has secured the video card in some amazing packaging.


The GTX 280 is not without flaws though.  It is a big chip and it is power hungry.  It also gets hot.  Real hot.  During certain applications the fan spins up so it is the loudest thing on the test bench (and in the test lab).  During Summer months when the temp inside the room would reach 80 to 82 degrees F, the fan would often start spinning in the 80% to 100% range in certain tests.  This turned out to be not a quiet card in these circumstances.  If a user does not have adequate airflow through their case, then the GTX 280 would spend a lot of its rendering time running with the fan at full speed.

NVIDIA has a large chip on its hands with the GT200.  It is fabricated at the 65 nm node, and it is around 576 mm squared in size.  Comprised of nearly 1.4 billion transistors, this is certainly a monster GPU.  While it is big, it did not skimp on the features or the performance.  Using 240 stream units, plus heavily redesigned from the previous G80 and G92 generations of parts, it was a rendering monster for its time.  It also really raised the bar on GPGPU performance, as it turned out to be much more flexible than its previous parts, or parts from its main competitor.

The chip was not cost effective to make though, plus the heat and power disadvantages loomed large for NVIDIA.  When AMD came out with their 55 nm based RV770 chips, NVIDIA really felt the pressure to shrink the GT200 chip.  The Radeon HD 4850 and HD 4870 could either match or overcome the GTX 260, and in certain overclocked cases get close to matching the mighty GTX 280.

The GT200b is the 55 nm shrunk version of the GT200, and the changes to the design are minimal as compared to the older 65 nm version.  The biggest differences are those brought about by the 55 nm process.  This is a half-node shrink from 65 nm, but TSMC was able to include a few new material advances at that node which have helped in overall power consumption.  The shrink went from 570 mm squared to 470 mm squared, which is basically around an 18% shrink.  This means a few more dies per wafer, but 470 mm squared is still awfully large. 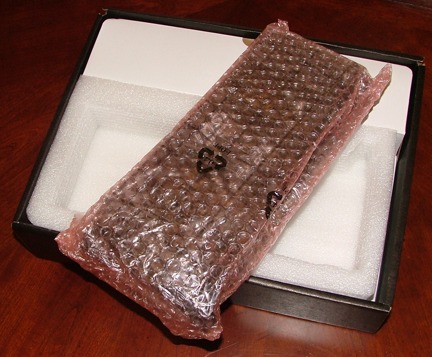 Not a whole lot of definition here for the card, especially with the layers of bags around it!

The GTX 280 had a 1 x 6 and 1 x 8 lead PCI-E power plugs, while the GTX 285 has the 2 x 6 lead plugs.  The 55 nm process did gain NVIDIA a lot of elbow room in terms of power consumption and heat production.  The smaller die sizes also allows NVIDIA to more adequately compete with AMD for the new upper end parts, which starts at $300 now (a far cry from when the 7900 GTX was released at $599 just a few short years ago).