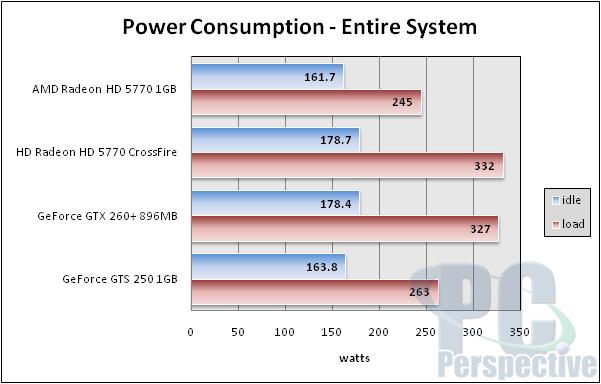 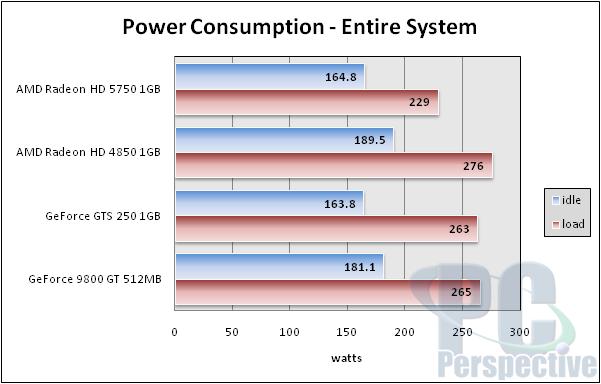 This is where things come into a better light and perspective for the AMD Radeon HD 5770: look at its power consumption numbers compared to that of the GTX 260+.  The HD 5770 uses 82 watts LESS POWER than the GTX 260+ and in fact the PAIR of HD 5770s in CrossFire mode use only 5 watts more power than the single GeForce GTX 260+.  Obviously AMD’s goal of designing for power efficiency are really paying off.

The same can be said for the HD 5750 when compared to the GeForce GTS 250 – it is able to meet or beat performance using 35 fewer watts of power.

The Radeon HD 5700-series of graphics cards are definitely great performers right out of the gate.  The HD 5770 put itself in contention with the GeForce GTX 260+ graphics card and easily bests the GeForce GTS 250.  That being said, I was surprised to find it losing out on our gaming results to the GTX 260+ more often than not – in games like Batman, HAWX and even Resident Evil 5.  In some cases, especially at lower resolutions, the differences were pretty dramatic in favor of NVIDIA’s offering.  And considering how few people are gaming on 2560×1600 monitors, the fact that AMD seems to be catching up as the resolution increases is not as convincing an argument in their favor as it might otherwise be.

The Radeon HD 5750 faired much better against its competition – beating out the GTS 250 and 9800 GT regularly.  Across nearly all the resolutions and games, the HD 5750 was able to equal the performance of the GTS 250 while using less power and offering more features.

It dawns on me that while both of these cards are very good in their own right, I have the same small dilemma with them that I had with the HD 5870 and HD 5850 cards last month – they are good but AMD has priced themselves just barely too high to make either option the runaway home run decision.  Instead, I feel that there is a valid debate between the HD 5770 and GTX 260+ pending GT200 availability and pricing and if the gamer has no qualms with added power consumption.

Again, just as with the HD 5870 launch, AMD knows they have more the rely on that just performance; features like DirectX 11 support, Eyefinity and HDMI 1.3 support (with uncompressed 7.1 channel audio) add a lot of value to these cards in the $100-170 price range. 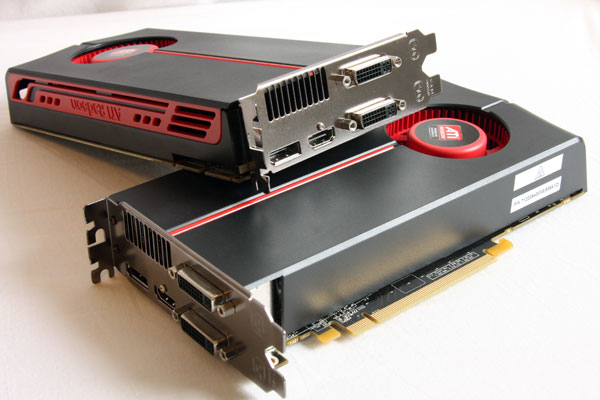 Eyefinity deserves a little questioning though: can a card at $170 with the performance of the HD 5770 really power three monitors of any size?  AMD claims that the optimal resolution for three panel gaming on the HD 5770 is 1280×1024.  That might be true, but it seems like a very uncommon resolution for monitors that you can buy TODAY – more likely will be 1680×1050 and pushing 5040×1050 would likely be a struggle at decent IQ settings for the GPU.  Now if only they could get CrossFire working with Eyefinity we might have a REAL debate on our hands…

If you want more information about Eyefinity and performance considerations about the technology, check out my posting from past week that looks at Eyefinity performance in some detail.

As has been the basis for this entire comparison, the Radeon HD 5770 should be available this week with a price tag of $160 or so while the Radeon HD 5750 will run you around $110.  That puts these new cards into some very competitive situations against cards like the GTX 260+ and GTS 250 from NVIDIA.  And even though those cards are based really old technology (old in the GPU world at least) they remain price-competitive in today’s gaming titles.

We will update here throughout the week as we see these cards popping up for sale.

UPDATE: Some of the cards are starting to show up already:
Final Thoughts

AMD is really pushing its advantage while the iron is hot and continues to bring the Evergreen GPU technology to more price segments and consumers’ budgets.  The Radeon HD 5770 and HD 5750 bring DirectX 11 gaming to a completely new market (even though there is only a single title available today) while NVIDIA is still months from offering any DX11-ready hardware.  The performance and power efficiency of the Radeon 5800 and 5700 cards also continues to impress; a user could run a pair of HD 5770s in CrossFire under the same thermal envelope as a single GeForce GTX 260+!

The Radeon HD 5770 and HD 5750 impress but don’t really dominate over NVIDIA’s options as I’d hoped they would.  AMD continues to avoid the death blow to NVIDIA by not upping performance or cutting prices to that next degree, but it is hard to see any other outcome than total AMD GPU dominance into this holiday season.

If you want to discuss this review with our readers and staff, just head into the PC Perspective Graphics Forum!