NVIDIA is out with a set of GPUs for the desktop budget market in the form of the GeForce 210 and GeForce GT 220. Can these options, now running on 40nm process technology and implementing DirectX 10.1 support, compete with the year-old Radeon HD 4670 cards for dominance in the $70 GPU market?

Today NVIDIA is releasing a set of products in a near silent fashion – this isn’t a release that tends to get a lot of attention.  And even though the idea of NVIDIA finally getting around to selling 40nm GPUs to the enthusiast is exciting, the GeForce 210 and GT 220 are really not targeted to that segment of users.  Instead you’ll find that NVIDIA’s latest offering falls into the sub-$100 pricing and obviously will lack a lot of the performance of the GT200-series that we are used to seeing.

What we are curious to understand is how well the two new GPUs compete against the AMD offerings at similar price points in terms of basic gaming performance and feature sets.

If you remember not too long ago, NVIDIA announced its very first set of 40nm GPUs for the mobile space: the GeForce 200M back in June.  Those GPUs and the ones being released for the desktop market today are essentially identical in features. 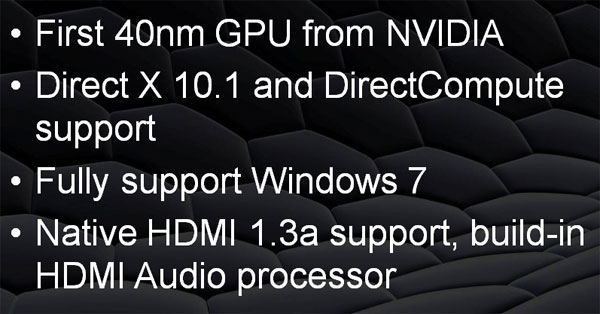 Not only are the GeForce 210 and GT 220 the first NVIDIA graphics cards built on TSMC’s 40nm process technology, they are also the first to support the DirectX 10.1 standard that was included with AMD’s 4000-series of GPUs last year.  NVIDIA has been slowly backing off of its push against DX10.1 as “unnecessary” and has moved that bus onto the world of DX11 – which AMD’s new 5000-series of parts supports.

One thing you will NOT find on these low end parts is GDDR5 support – something we were surprised to see on the mobile versions of these GPUs this summer.  While that would potentially increase performance, quite frankly the lack of raw processing power on these GPUs negated the need for higher bandwidth memory. 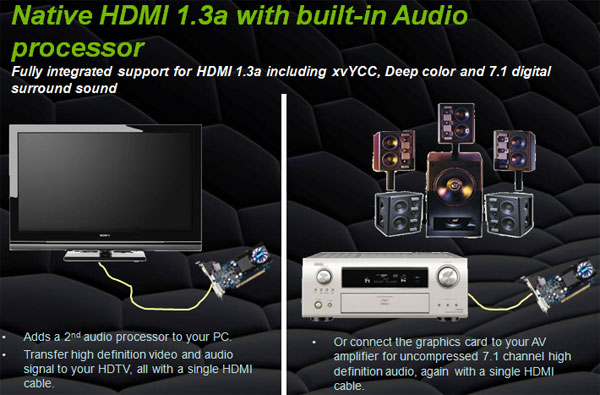 The GeForce 210 and GT 220 also are the first offerings from NVIDIA to include support for the HDMI 1.3a standard that includes uncompressed 7.1 channel audio (commonly called Blu-ray audio).  The GPUs here support audio bypass; you will still need an audio solution (either on your motherboard or on a discrete card) that supports 7.1 channel audio and correct software as well. 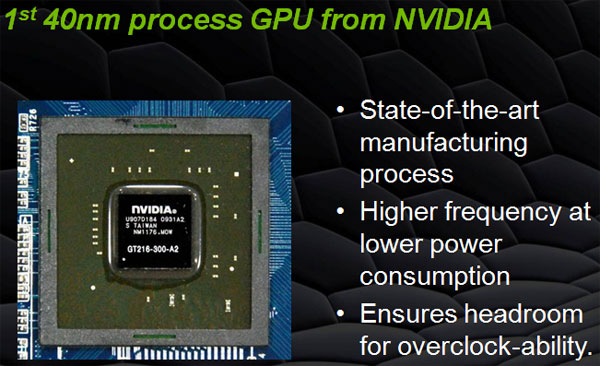 As we will see in our card break down on the next page, the 40nm GPUs from NVIDIA are tiny, especially compared to any other GT200-based design.  If TSMC can continue to improve their 40nm process, which we are really hoping for as the next-generation of parts from both AMD and NVIDIA reach us, then that should mean better performance and lower power for these budget cards. 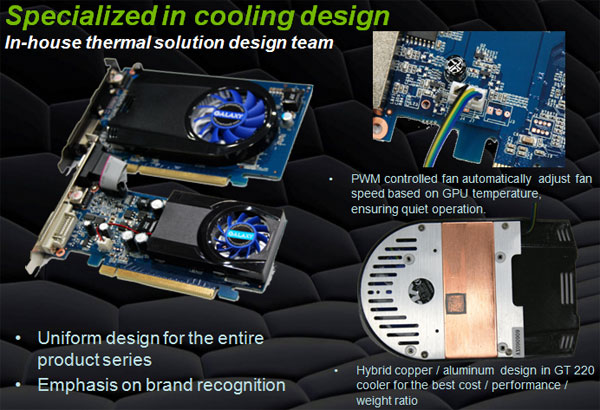 Galaxy is one of the largest NVIDIA partners and a company that not many enthusiasts are familiar with; but you soon will be.  Though they are mainly making names for themselves on the low-end and mid-range offerings, the company will soon be taking their engineering expertise beyond it into the high end with Fermi. 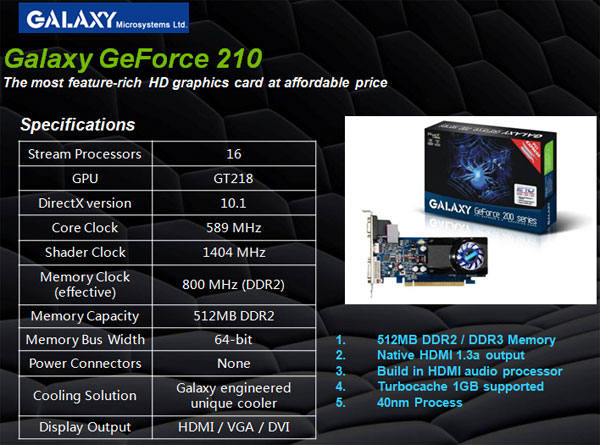 The GeForce 210, previously known as GT218, sports 16 shader processors that each run at 1404 MHz.  The core of the GPU is running at 589 MHz; all of these are respectable clock speeds for the GT200 architecture but obviously going from 240 SPs on the GTX 285 to 16 on the GeForce 210 is going to result in significant performance drops.  It includes 512MB of DDR2 memory on a 64-bit memory bus. 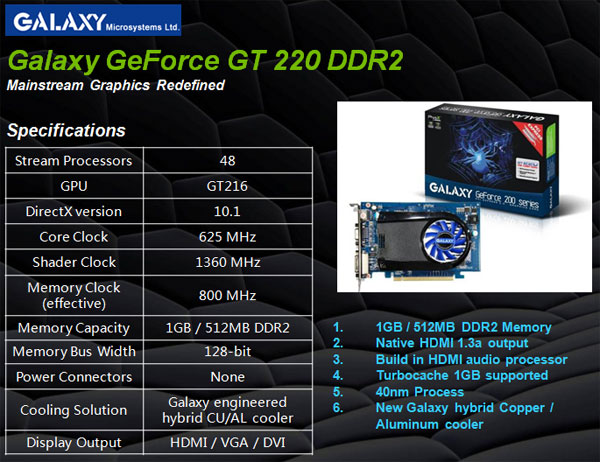 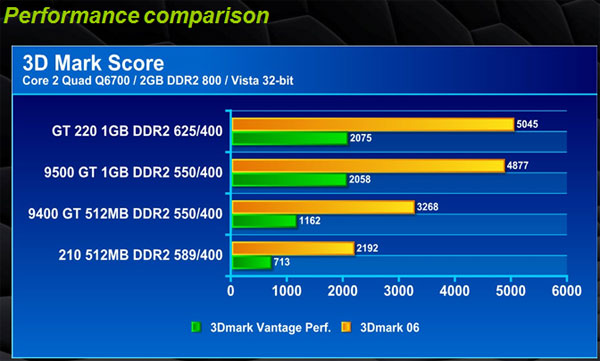 In terms of product placement, NVIDIA claims that the GeForce 210 and GT 220 fit right around the 9500 GT/9600 GT segment of the market.  What is most confusing to me is that NVIDIA hasn’t said that the 9000-series has been EOL’d and it is likely we’ll see both lines continuing through the end of the year.  In the NVIDIA provided slide above you’ll see that the GT 220 and 9500 GT perform nearly identically – so why bother with the new part? – the GT 220 will run cooler and costs less to make. 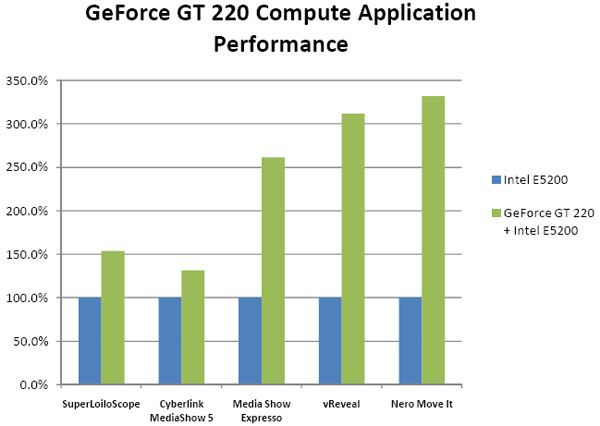 Obviously another big selling point for the new GeForce GT 220 and the 210 are features like CUDA.  In this graph NVIDIA shows how even the addition of a $70 graphics card can drastically improve performance in certain consumer applications like Nero Move It and the much-hyped vReveal. 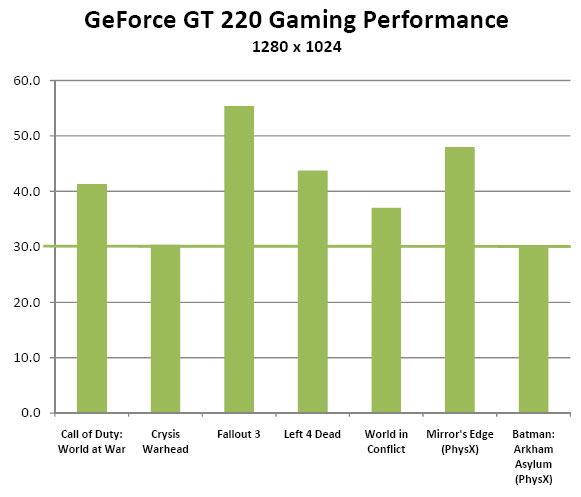 Finally, here is the last graph supplied by NVIDIA looking at the modest gaming performance.  Obviously with a test resolution of 1280×1024 you won’t be expecting incredible results but what I found most surprising was the lack of any comparison results.  It would seem that NVIDIA wasn’t very bullish on the ability for GeForce 210 or GT 220 to compare with the AMD’s offerings.