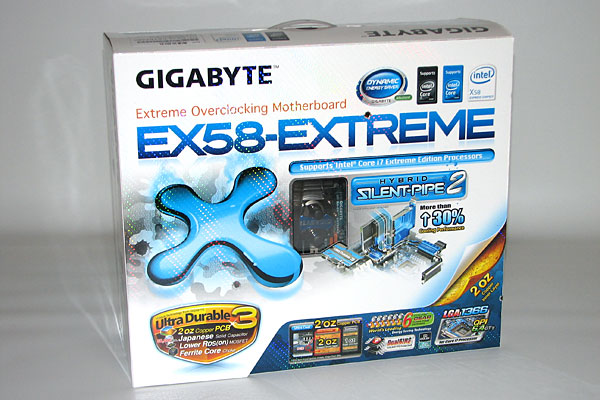 The Gigabyte EX58-Extreme comes in an enormous and absolutely gorgeous retail package that features the Hybrid Silent Pipe 2 features on the board as well as Gigabyte’s Ultra Durable 3 technology. There’s also a small window that shows consumers the watercooling barbs over the X58 chipset. 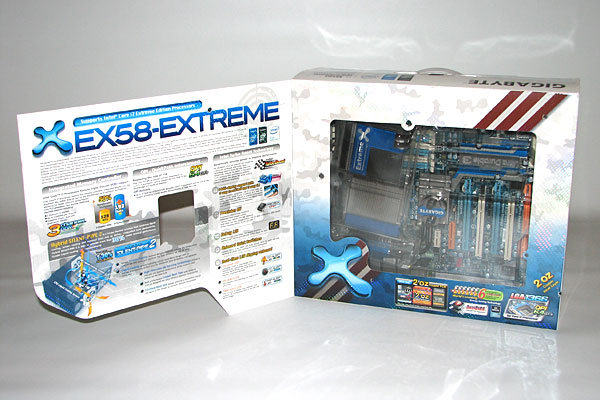 There’s a large window behind the front panel of the package that showcases the motherboard itself in all its glory. It also shows off the extra PCI heat pipe and aluminum fin array that attaches to the heat pipe assembly over the Northbridge. 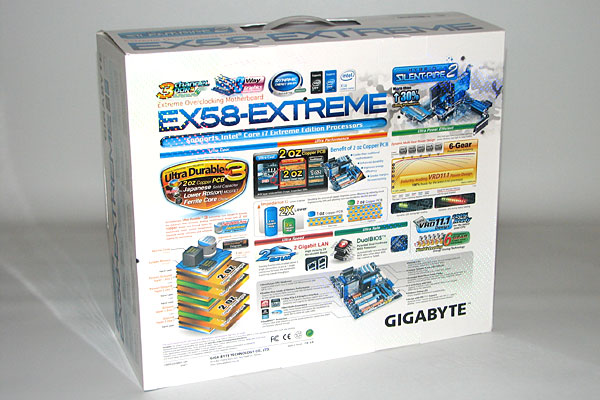 The back panel of the retail box goes into more detail about the thermal properties of the board as well as the extra two ounces of copper Gigabyte uses on all their motherboards now. This feature will help reduce heat across the entire board as well as reduce EMI. 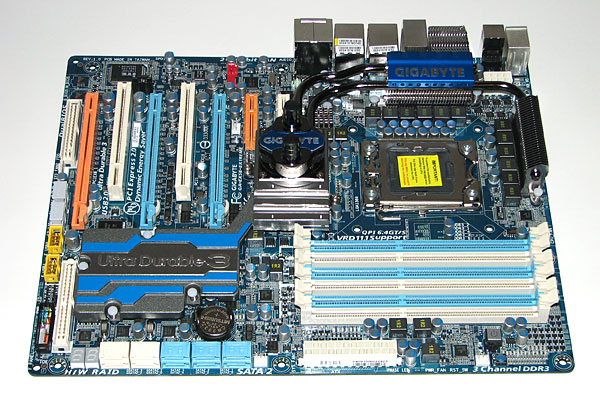 I couldn’t help but smile when I unsheathed the EX58-Extreme and basked in its radiance. I review tons of motherboards, but this one truly has almost every feature I’ve dreamed of in a motherboard. The overall layout of the board is very striking and Gigabyte had to brainstorm into how they were going to fit everything they wanted on the EX58-Extreme. The triple channel memory takes up a lot of room toward the top of the board, but there seems to be plenty of room for a third-party heatsink or watercooling solution. The heat pipes wrap beautifully around the capacitors and other power components and flow perfectly into the X58 chipset. The low profile heatsink over the Southbridge is also functional because its heat is drawn out by the entire heatpipe system. 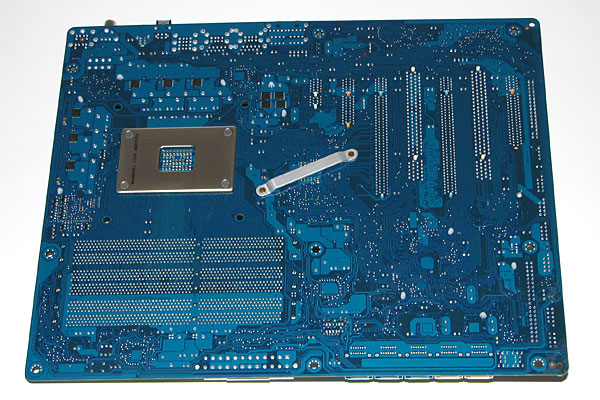 The back panel of the motherboard is pretty plain as usual. Just a small aluminum back plate and clip behind the processor and Northbridge. 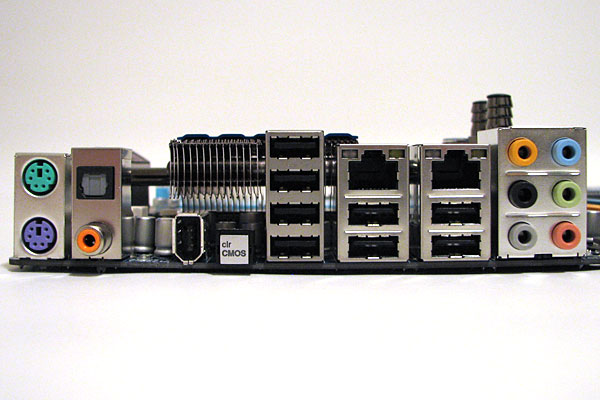 The back I/O panel has a host of ports and jacks to cater to all types of users, including gamers, audio lovers, and other multimedia power users. The back panel consists of the usual PS2 keyboard and mouse ports, eight USB 2.0 ports, two Gigabit LAN jacks, firewire, clear CMOS button, and tons of audio ports including coaxial and optical S/PDIF connectors. This is a great setup and adds a lot of functionality users can take advantage of in their gaming or multimedia workstations. 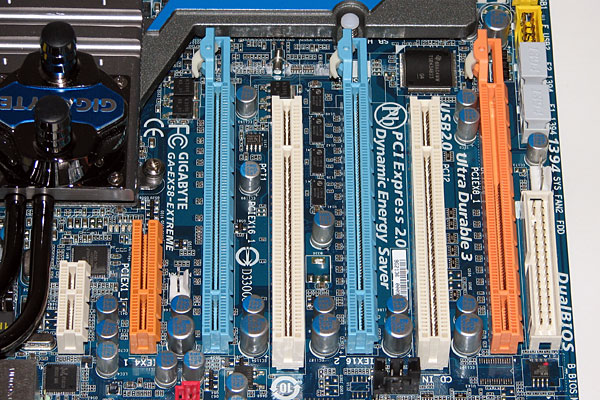 One of the key elements of this motherboard is its support for triple CrossfireX and SLI for high definition gaming. Two of the PCI-E ports are x16, while the third (orange one) is only x8. This isn’t a huge issue, but something to note. Gigabyte also includes one PCI-E x1 port, PCI-E x4 port, and two regular PCI ports. 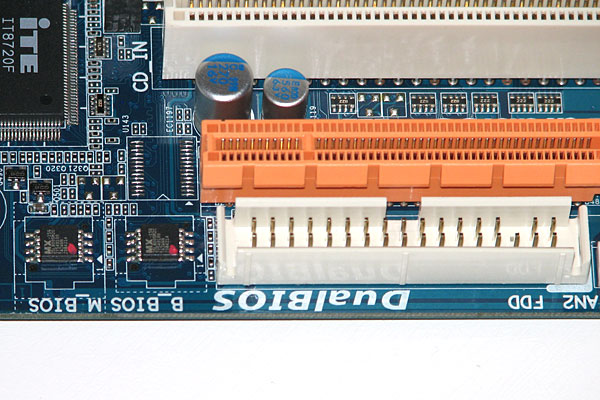 Another unique feature in most modern Gigabyte boards is their dual BIOS chips on board. These chips have two physical BIOS ROMS and the second chip is used as a backup in case overclockers corrupt the first BIOS and make it inoperable. When there is a BIOS firmware failure, the backup BIOS will recover the main BIOS file back to its default factory setting. 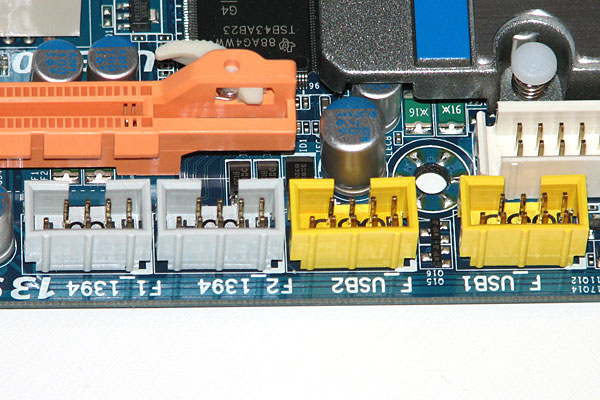 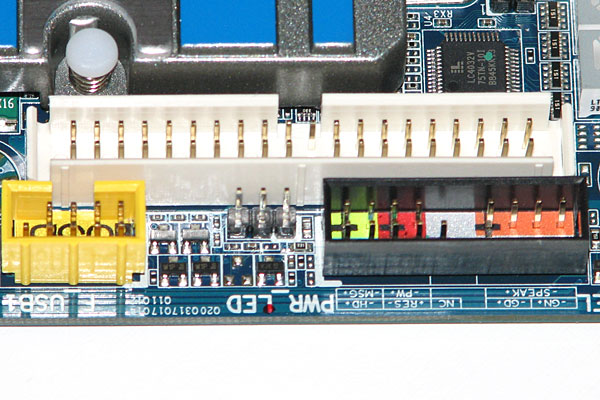 The bottom right-hand portion of the motherboard is dedicated to the front panel headers for power, reset, speakers, and hard drive and power LEDs. 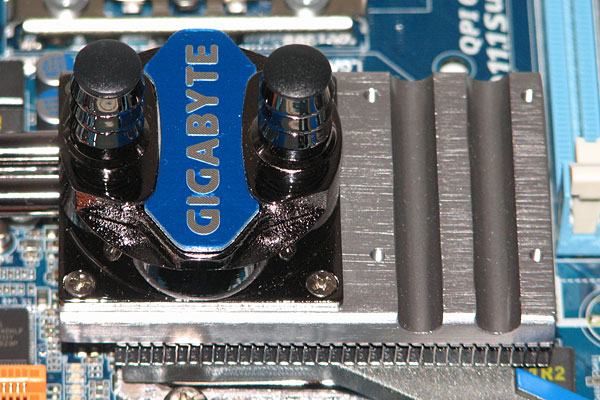 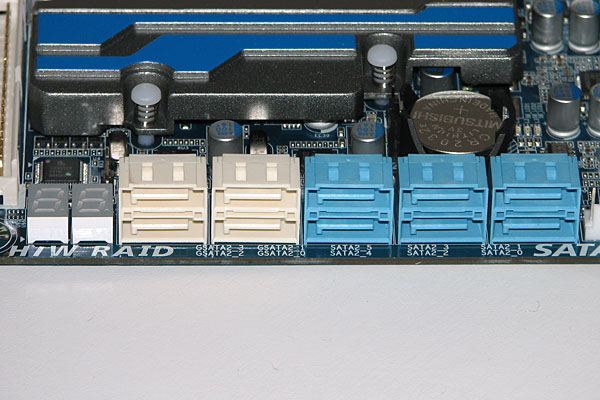 The EX58-Extreme is also adorned with 10 SATA 3Gb/s ports via the Southbridge and a separate Gigabyte SATA2 chip. The Southbridge handles six SATA 3GB/s ports (in blue) and also supports RAID 0, 1, 5, and 10. The SATA 2 chip takes care of the other four SATA ports and can also do RAID 0, 1 and JBOD. This is good information to know to configure custom RAID arrays on multiple controllers. 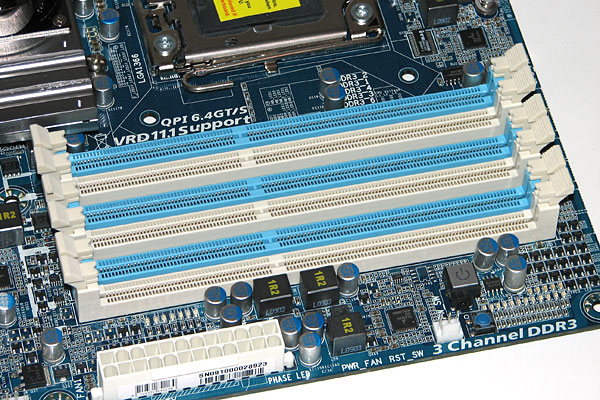 One of my favorite aspects of this board is its six 1.5V DDR3 DIMM sockets supporting up to 24GB of system memory. It also doesn’t matter if users use dual or triple-channel DDR3 memory architecture either. The max memory specs this board can handle are DDR3 2100, but it can also work with 1333, 1066, 800 MHz memory modules. 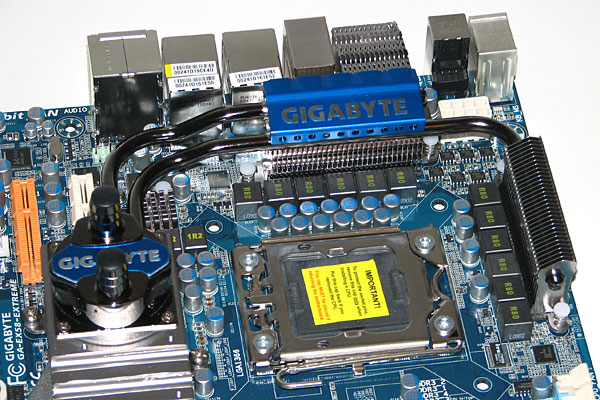 To round out our overview of the layout of the EX58-Extreme, we move our focus to the power components around the CPU. Stable power is a major concern for overclockers in general and the EX58-Extreme doesn’t disappoint with their custom “6-Gear” power phase switching technology. Each power phase includes two MOSFETs, one choke, and one solid capacitor. Using this type of power switching system helps optimize the PC’s power efficiency between light and heavier loads. 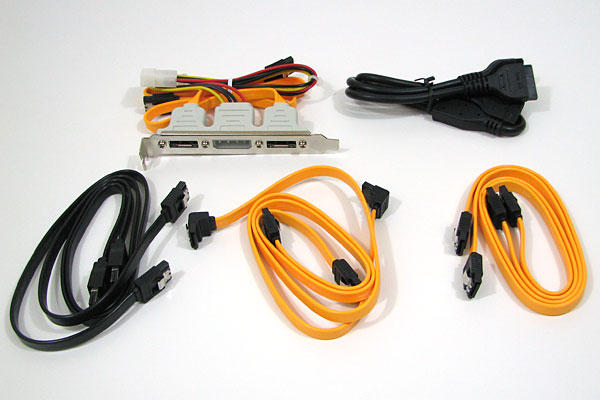 The EX58-Extreme comes with a large bundle of accessories including four SATA cables, two eSATA cables, one SATA bracket, and an external eSATA power connector. 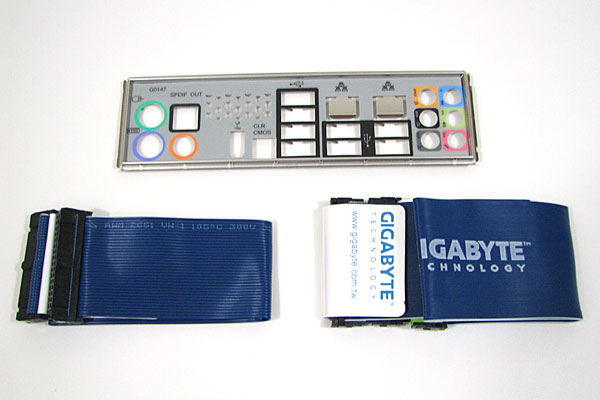 The motherboard also comes with a color-coded I/O backplate and a PATA cable and floppy drive cable. 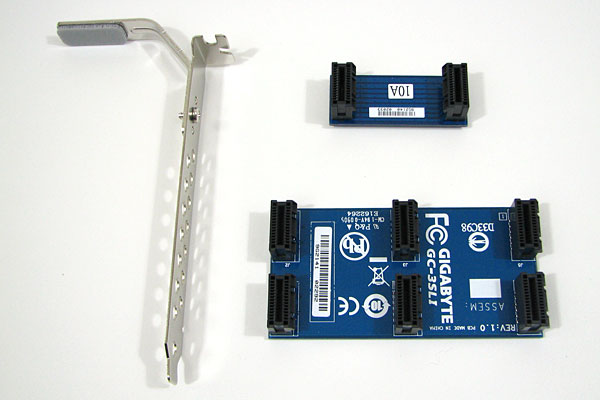 Gigabyte also included bridges for dual and triple graphics card configurations as well as a retention bracket to ensure the bridge is secure during operation. 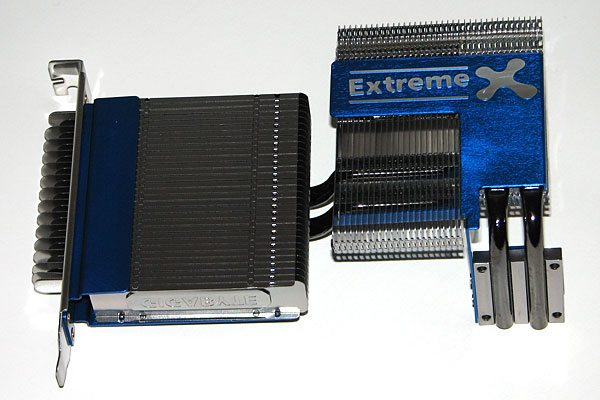 One unique component Gigabyte added to this board is the hybrid Silent-Pipe PCI cooling add-on bracket. This contraption is secured directly over the X58 chipset with four screws and integrates into the board’s overall heat pipe cooling system. Once installed, it helps move heat out of the case through one of the system’s PCI slot openings. 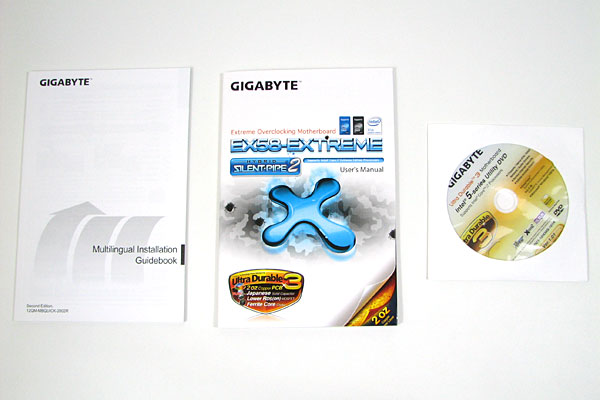 Lastly, there is a multilingual installation guidebook, user manual, and driver CD. All in all, prospective users will have a host of cables, bridges, and instructions for using most of the features on the EX58-Extreme. 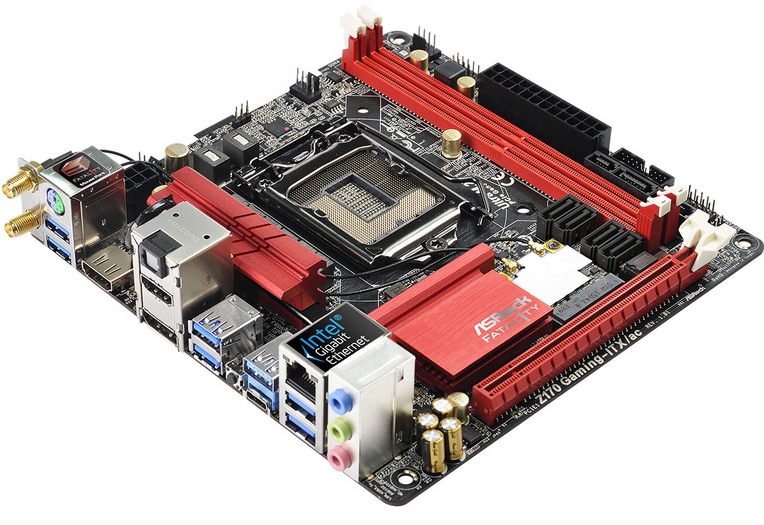