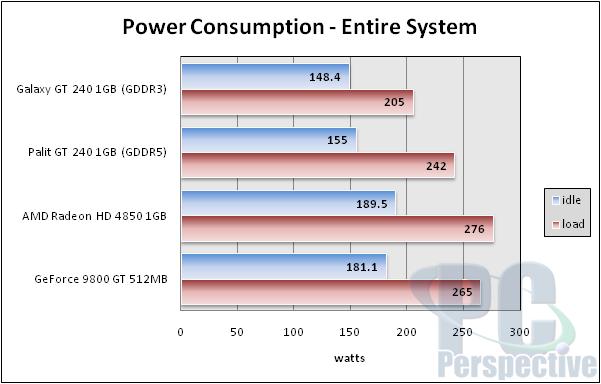 One thing you can say about the GT 240 – it is easy on the power consumption!  In fact, the Galaxy GT 240 stands out even amongst the pair of cards being reviewed today in that it uses 37 watts less power than the Palit version.  Obviously the difference in power of GDDR5 memory and higher clock rates is pretty significant consider these cards are rated at 70 watts!

I think it should be fairly obvious that I am not overly impressed with the performance of the GeForce GT 240 GPU in general.  The new 40nm part does offer DX 10.1 support and lower power consumption, but compared to most other parts on the market, even those of the same price points, the GT 240 isn’t able to put forth anything new.  As I said in our testing setup page, the GeForce 9800 GT is still a widely available card and in all cases was faster than the GT 240s we tested today.

The difference between the two GT 240 cards is significant though – both in terms of performance, power and price.  The Galaxy card was by far the most efficient and will come in a good $30 less expensive than the Palit card.  The Palit card though is far and away the better performer – the difference built on the use of GDDR5 memory (rather than GDDR3) and higher core and shader clock speeds. 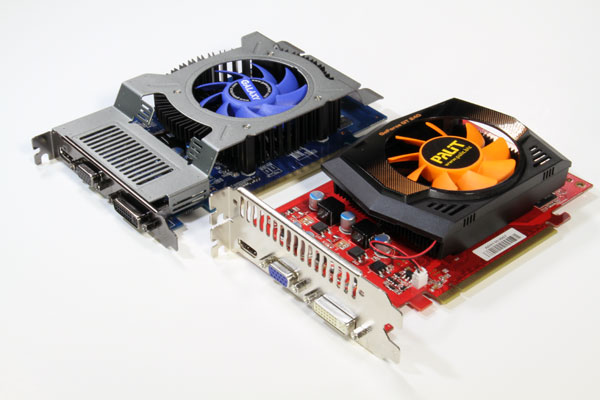 The GT 240 does have a couple of advantages over some other cards of the same price level.  First, the GT 240 is the only card of this type that can claim all of the above: support for DirectX 10.1, 40nm technology, support for CUDA applications and support for PhysX processing.  The value of these different features can be debated – there aren’t many titles that support DX10.1 specifically over DX10, CUDA applications have limited usage scenarios and PhysX really only has one big title available today.

The good part about being a little bit late with a review (sorry!!) is that pricing and availability is a bit easier to gauge.  Both cards we are reviewing today are available today.
Now, remembering that the Radeon HD 4850 can be found for about $125 today and the GeForce 9800 GT for $89.  With those prices in mind, does it make a lot of sense to specifically target a GeForce GT 240 for a PC today?  I find that a hard argument to make.  Even if you decide that PhysX and CUDA are viable computing options for your system, the 9800 GT is still just a better overall gaming card.

If your target is only for an HTPC then maybe the dedicated HDMI connection and integrated audio support on the GT 240 might give it the advantage over the other options.

The GeForce GT 240 makes the second consecutive GPU release from NVIDIA on the low end of the market (the first being the GeForce 210 and GT 220).  While targeting this segment is definitely not a bad idea in terms of profitability and market size, I can’t help but wonder why NVIDIA wouldn’t improve performance over existing options.  For a company that has such expansive resources based on performance testing, they seem to have decided to ignore the fact that all of these new cards just cannot compete in terms of raw gaming performance.  But it is obvious to me that they CAN compete given some higher clock speeds – so why they won’t is beyond me.

Looking at our specific cards today, both answer specific, but different, questions.  The Galaxy GeForce GT 240 is the best option for a lowest-cost, lowest power/heat HTPC ready card that has some modest gaming potential.  If you are looking for a card that will offer all the same features but maybe will give you a slightly improved gaming experience and can handle another $30 or so onto the cost of your system, the GDDR5-based Palit GeForce GT 240 should fit the bill.