As is usually the case with brand new GPUs, our versions of GPU-Z used for testing didn’t have all the necessary information to report back to us on our two different graphics cards. 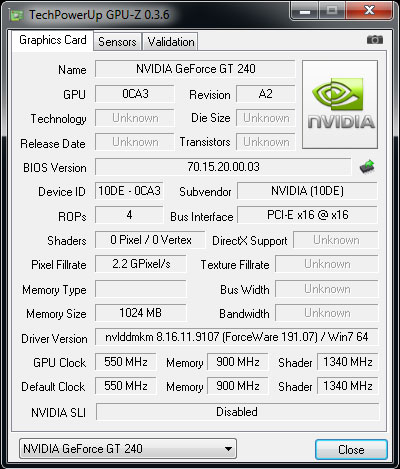 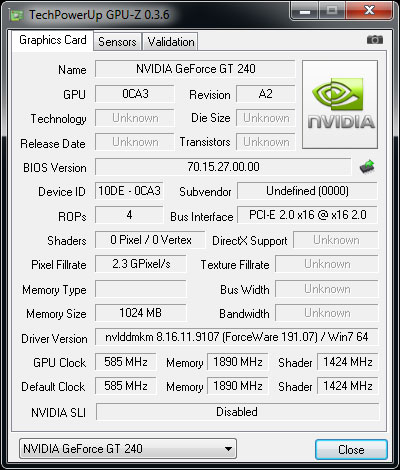 
You can see that the clocks on the Galaxy card are much more in line with the reference settings from NVIDIA while the Palit card that integrates GDDR5 memory runs at slightly overclocked speeds.  We’ll see how much performance difference all of these changes actually make though as we proceed through our tests.

Obviously since these are low performing cards, our testing resolutions and settings will be somewhat different than those you saw in the recent HD 5870 and HD 5850 reviews.  For example, we are only testing at 1680×1050 resolution – probably the most popular resolution sold on today’s LCD monitors.  I still decided to throw the entire gamut of our latest games at these cards including Batman, Resident Evil 5, HAWX and more.

For performance comparisons we will be comparing the two GeForce GT 240 cards to the Radeon HD 4850 and the GeForce 9800 GT cards.  Those are definitely not the comparisons that NVIDIA was hoping for, but those are the CORRECT ones based on today’s pricing and availability.  The Radeon HD 4850 can be found for the $120 price range (the same as the Palit GT 240) while the 9800 GT can be found for $89 (the same as the Galaxy GT 240).

Here is our test system setup for the benchmarks:
Obviously the rest of the components are far out of the leagues of these graphics cards but it should help us keep the gaming bottleneck on the GPUs.