The NF980-G65 is a nicely laid out board.  The three PCI-E 16 slots are all double spaced, so the maximum amount of double width cards can be used in SLI.  The SATA ports are all on the outer edge, with the connections perpendicular to the board.  This allows the insertion of the SATA cables without interference from longer video cards.  Some people like this, and others hate it, all depending on how much space their case gives them on that outer edge.  There is no secondary SATA controller, which is often found on boards in the + $150 price range.  There is also no E-SATA connection on the back of the motherboard either.

The board does include a Firewire controller, with a port on the back and the ability to connect a front panel port from the PC case to the motherboard.  It features one Gig-E connection on the back plane as well.  The board only sports four USB 2.0 ports on the back of the motherboard as well, which really is the bare minimum anymore that any board should have.  Most other boards I have worked with lately have six of them, which I consider to be much more appropriate considering the connections that most people use (webcams, mice, keyboards, joysticks, etc.). 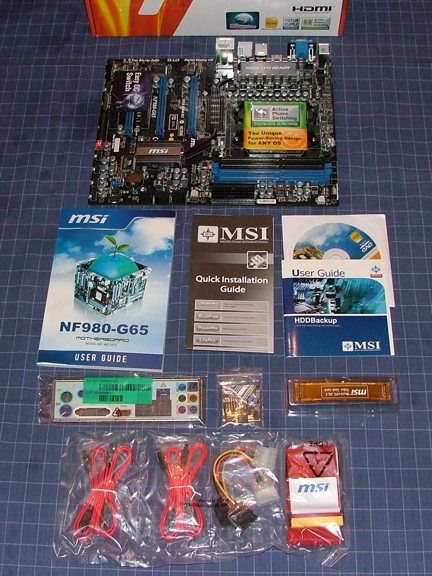 The strange looking package in the middle is the case badge and the pin-out blocks for easy installation of wiring in a case.


Sound is handled in two ways.  The board comes with a Realtek ALC-889 audio codec, which is a true 8 channel 24 bit/192 kHz audio solution.  It is able to decode HD audio into its analog outputs.  It is not able to bitstream HD audio through a digital connection.  The other way is by the built-in audio controller on the NVIDIA chipset.  This is also a fully featured digital unit, and it does not do any digital to analog conversion (the Realtek codec handles those jobs).  It is able to convert protected HD audio to 8 channel LPCM.  While this is not bitstreaming, it is close enough in terms of audio quality for the majority of users out there.  The only digital audio output on the back of the board is the HDMI port.  Users can route the ALC-889 digital signal through the connection via a BIOS setting.

MSI integrates what looks to be a 4 + 1 power phase for the CPU and memory controller.  It officially supports 140 watt CPUs, which basically means it can handle the old Phenom II X4 965.  It is not nearly as fancy as their Dr. MOS unit, and it certainly does not match up well with units from Asus and Gigabyte which features 8 + 2 phases with their high end motherboards for the AMD market.  There is still a lively debate about the advantages of “more phases” when it comes to CPU stability, performance, and efficiency.  MSI has chosen to be on the side of “less is more”.  The board does feature all polymer caps, so history will not come back to bite MSI with exploding electrolytic units.

The cooling on the board is more than adequate for the job.  The three major heatsinks are all connected by a heatpipe, and during use the coolers never really became uncomfortably hot to the touch.

The BIOS is well laid out, and the granularity of settings is actually quite impressive.  Voltage can be scaled up or down in 0.01 increments for the CPU, chipset, and memory.  It features all of the RAID settings to enable the NVIDIA controller to handle RAID 0, 1, 0+1, 5, and JBOD.  Memory timings are also highly configurable.  Overclocking is very easy, and all the settings for it are located under the “Cell Menu” in the BIOS.  Flashing the BIOS with a USB flash stick is also supported, and I can attest to how easy it is due to me flashing the board twice during testing.  The only potential issue I came across was that no matter what memory was inserted, it would default to 1.5v.  Some DDR-3 memory modules will not boot up, even at DDR-3 1066 speeds, at 1.5v. 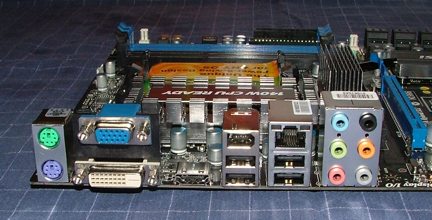 Four USB ports just do not cut it anymore.  The HDMI output is nice, but not entirely useful in many of the situations this board will find itself in.

One area where the board is lacking is the amount of bundled extras.  One major oversight is that the board does not come with a triple SLI cable, even though this is the only AMD AM3 board out there that can handle triple SLI.  Instead only one SLI ribbon connector is included.  The overall bundle is fairly sparse.  It comes with the aforementioned SLI ribbon cable, 4 SATA cables, a molex to SATA power connector, an IDE cable, manual, driver CD, ATX backplate, HD Recovery software manual, and quickstart guide.

The only other real annoyance that I had with this board, and this is strictly personal, was the lack of power and reset buttons on the actual board itself.  This is of course not an issue for 99% of the people out there, but for folks who run their boards on cardboard boxes and in test stands, those two buttons are real handy.  Again, I can’t really ding this board for that particular lack of feature, but it certainly was annoying after having worked with the Asus M4A and Gigabyte MA790FXT series of boards which feature these buttons.