When it is PhysX!

EVGA and NVIDIA have teamed up to release what looks to be a pretty unique product to the marketplace.  The asymmetrical EVGA GTX 275 Co-op PhysX card features a GTX 275 paired with a GTS 250 GPU on one board.  This allows the GTX 275 chip to render all graphics, while the GTS 250 handles all of the PhysX calculations.  The board features a total of 1280 MB of memory between the two GPUs, and a total bandwidth of 179.8 GB/sec. 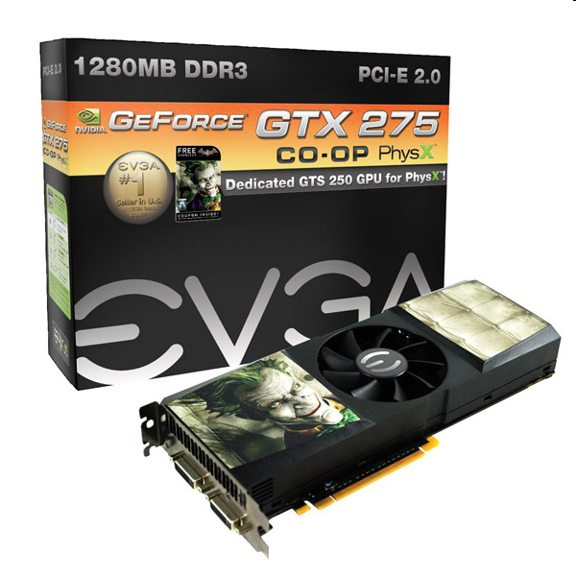 Yes, the G92 chip lives again.  This product was released in 65 nm variants in late 2007, was respun at 55 nm a year later, and has been gracing products from the 8800 GT to 9800 GT to 9800 GTS to the latest GTS 250 product from NVIDIA and their partners.  While the rendering performance of the G92 chip is far overshadowed by what both NVIDIA and AMD offer at the $100+ price points, it is still able to churn out some decent numbers when it comes to more general compute performance.  This is why it is getting another chance at life in this particular product.  We have heard through the grapevine that the overall PhysX performance of a G92 is slightly better than the dedicated PPU that we saw from Asus and BFG some years back.  We have no idea what this chip is clocked at, but we can assume that it is probably lower than a standard GTS 250 due to it being paired with a pretty power hungry GTX 275 chip.  The card itself features the 8 x 6 pin power connections.

Games which feature dedicated PhysX PPU support show a 20% to 40% increase in performance vs. just CPU physics computation.  The game that NV and its partners are really pushing for this technology is Batman: Arkham Asylum.  NVIDIA is continuing to work with more developers to get better PhysX support in gaming, and the GTX 275 has enough power to handle NVIDIA’s 3D glasses technology as well.

NVIDIA and AMD have been pushing to soak up as much processing power as possible these days, as most games are developed to be cross platform dependent… so high end gaming machines have no problems rendering at even the highest resolutions and AA/AF levels.  Eyefinity and 3D/PhysX are designed to soak up the power that current and upcoming GPUs are offering.

The GTX 275 Co-op looks to be a one-off product from EVGA, and I am not at all certain if other manufacturers will pick up this option.  So if a user does require a new video card to run their latest games on, and PhysX is a big attraction to them, then this will definitely fit into a niche.  The price for this is going to be a bit higher than many were hoping, as it will retail above $300.  To help offset the sticker shock, it does appear as though EVGA is throwing the Batman title in as a bundle.