Yes, the Apple tablet doesn’t really exist yet, but can’t we all just assume that it will in the not too distant future?  Even if that “distant” is like 2011?  And even though a non-item has been making the world of tablets exciting again, at least there is something new cooking up.  The JooJoo tablet (ugh) seems to be making a big splash after ripping of the TechCrunch guys and we at PC Perspective are all for innovative new mobile designs.

One company known for innovation on the mobile front is ASUS – they after all invented the netbook.  Well a new (but very brief) story over at Digitimes seems to indicate that ASUS will be showing off a new tablet-style device very soon:


Asustek Computer is making preparations to launch a new device named Eee Pad featuring a 4- to 7-inch panel, and which will offer a combination of tablet PC and MID functions, according to industry sources. Current details of the Eee Pad suggest the product has been inspired by the rumors of Apple’s planned tablet device, the sources commented.


With CES 2010 just around the corner, it is not only possible, but I think very likely, that we will at least see a prototype of such a device in January.  Though obviously no REAL pictures of the so called EeePad exist, this mock up from Engadget looks like it could be just that simple: 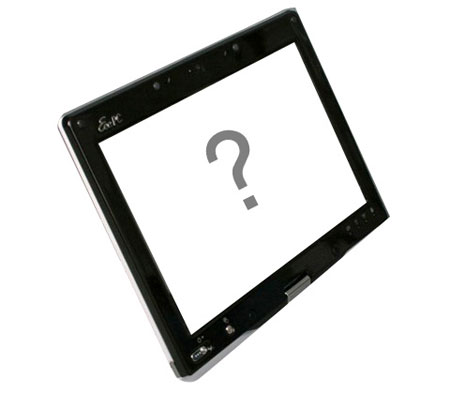 
All ASUS would have to do is take the touchscreen monitor that exists on some of their most recent Eee PC designs, rip them off and add some new software: presto, instant tablet!  Of course a tablet with that little thought having gone into it would likely be a failure, but we trust ASUS to spend the development time on such a unit but still be able to beat the likes of Apple to market.

Hopefully CES will answer a lot of our questions!