An interesting article over at Bright Side of News points something out to us that has been hinted at over and over again during Intel’s recent processor releases: the tick-tock model that Intel has been promoting for their corporate technology strategy is falling behind.  Using a recently revealed roadmap from a Chinese review site, BSN speculates that the current Nehalem and Westmere parts (Clarkdale and Arrandale are due January 7th) are going to be around well into 2011 which would make Sandy Bridge, the next “tock” more than a bit late.


As you could observe, after the i7 980X introduction in a month or two at the high end – which follows the entry level dual core Westmeres soon after you read this, there is NOTHING else in 2010. From a competitive point, this still looks fine. At the top, the i7 980X will wipe the floor with anything AMD has right now, or any stepping they may come out with, in 2010. And at the low end, the dual core highly overclockable Westmeres can hold their own against entry level quad core AMDs. 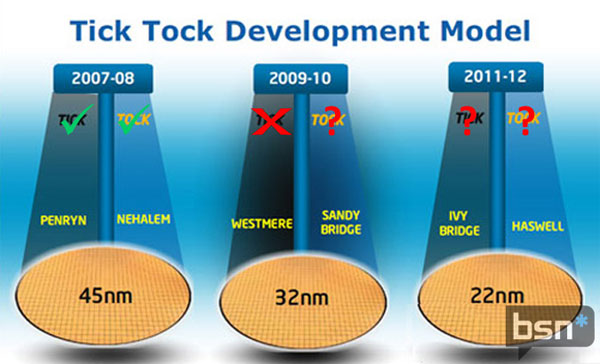 Image from Bright Side of News


Whether this is the fault of poorer than expected yields or engineering or maybe just a complete lack of competition from AMD, the facts are that Intel’s scheduling has changed quite a bit over the last two years.  With AMD stumbling just as often (if not more so) on the CPU front, Intel is, unfortunately for consumers, not pushing the advancement of technology as quickly as it could.

While this is bad for consumers, it is good for Intel’s bottom line.  They can take their time on development, perfect the process slowly rather than having to force themselves ahead for performance sake.  Ugh – what’s an enthusiast to do?