Evaluating consumer-level and professional-level digital art tablets is a very subjective process. As with all our reviews, we try to develop good testing perimeters that will truly evaluate the features most users will take advantage of if they purchase these products. One key aspect that many users will be using both of these Wacom tablets for is for creating free-hand images. They will also be using it for coloring, shading, and enhancing images. Lastly, we wanted to ensure we were using industry-standard graphics software, so naturally we chose Adobe Photoshop CS4 as the main platform for our testing. So, with all that in mind, we decided to create two free-hand images in Photoshop CS4 with full color and highlights so we can take our readers through an indepth, hands-on journey with the Wacom Intuos4 and Bamboo tablets. 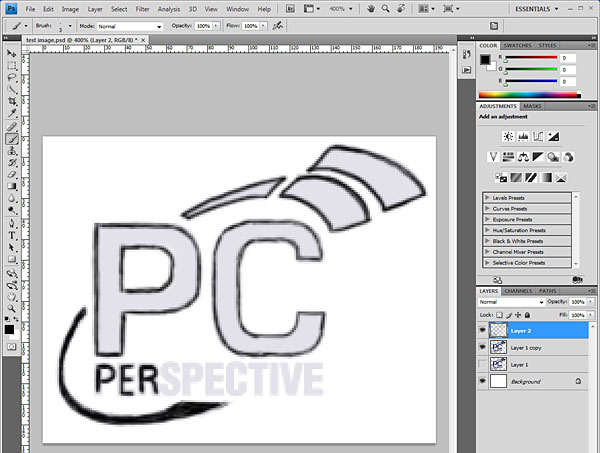 After opening Photoshop CS4, I immediately opened a copy of the PC Perspective logo and dropped the opacity to 20 percent. Then, I changed to a very small brush size using the Intuos4 pen’s toggle button and I started to trace the logo. Since this was my first time using these tablets, I noticed small issues with applying the right amount of pressure as you can see in the image above. After playing with different nibs and figuring out how much pressure I needed to apply, I was able to trace the image in about 30 minutes. 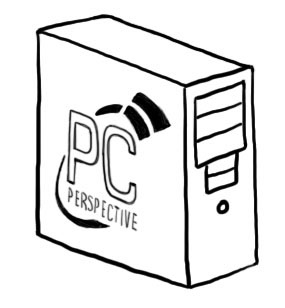 After tracing the logo, I wanted to see if I could create a free-hand drawing of a computer case with the PC Perspective logo on the side of it. Without the use of any rulers or any other guides in Photoshop, I started to draw out the computer case and use the logo I traced in the previous step. Drawing consistent lines with the right amount of pressure was the most difficult aspect I had to master to draw the case properly. After almost an hour I came up with the line drawing above. It isn’t perfect by any standard, but it is definitely a step in the right direction. 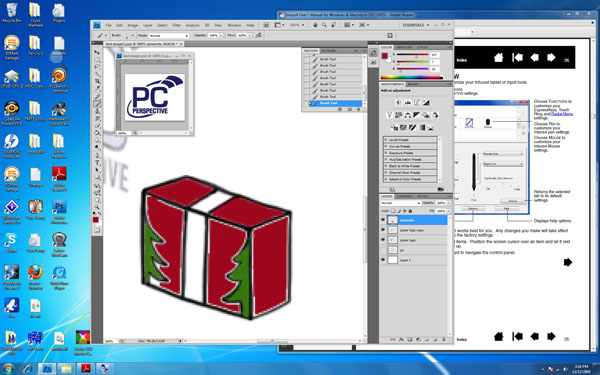 After doing the initial line drawing for my computer case, I wanted to make it a bit more festive so I created a few Christmas presents to go around the case. After creating the initial line drawing, I started to fill it in with some color. This was harder than it looked because I had to be careful around the edges to not color over them. Usually, I just make a selection with the Magic Wand tool or create another layer when I want to color something in. But, for this experiment, I wanted to see what would happen if I did everything on the same layer. After making a few mistakes here and there, I figured out that it was pretty easy to just draw back in the black lines after I colored in the ribbon, wrapping, and Christmas trees. I created three of these Christmas presents in about 30 minutes. 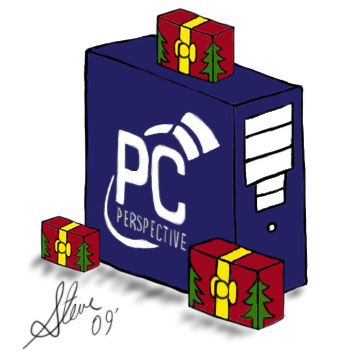 The final steps in my first free-hand drawing using the Intuos4 tablet were coloring in the computer case, placing the Christmas presents around it, and adding some simple shading to give it more depth. Overall, I think it came out pretty well after my first attempt at free-hand drawing with the Intuos4. There is definitely a learning curve with these tablets, so consumers be warned that they will need a little patience to wield the full potential of this product. 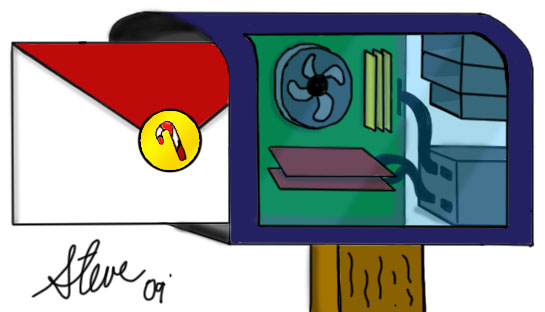 After going through an extensive learning phase using the Intuos4, I switched over to the Bamboo tablet to take it out for a similar test run. I wanted to create a different picture so I decided on doing a computer shaped like a mailbox with a Christmas card sticking out. This drawing didn’t take nearly as long as the first one because I had some more on-the-job training with the Intuos4. I think my shading is a lot better in this image, but there are still some issues with pressure sensitivity and overall skill with drawing. Some of these things can be overcome by just using the tablets more, but I noticed some things will the user to adapt to so they can create beautiful images as well as touch up photographs and create graphic illustrations. 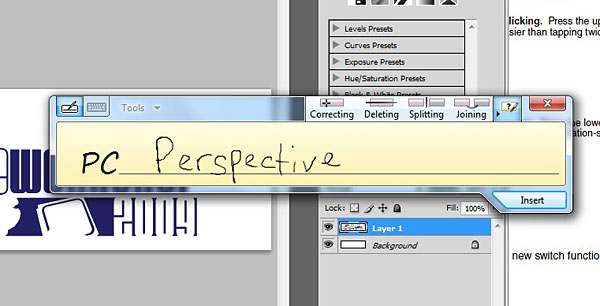 One final feature I wanted to note was the Tools tab that is slightly hidden on the left side of the screen. If you roll the tablet pen over it, it will pop up with the screen above. This screen allows you to convert your written test into computer text. This text can be altered into any fonts you have loaded on your system. You can also add this text as a text layer in Photoshop CS4. Pretty cool huh? 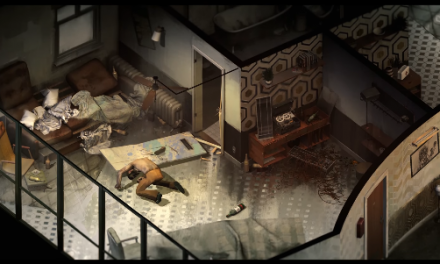