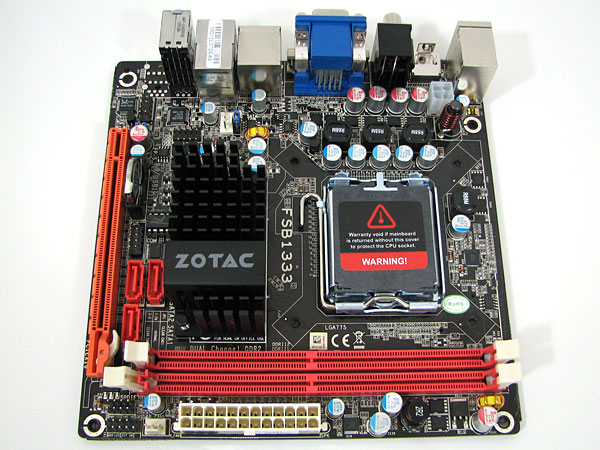 Here’s the 9300-ITX WiFi out of the box and Zotac truly used every ounce of PCB to pack as many features on this board as they possibly could. The massive heatsink over the chipset truly dominates the lower half of the board while there is ample room around the CPU to add a decent low-profile heatsink for those users looking to put this board into an HTPC system. The PCI-E expansion slot also takes up the entire bottom section really makes things cramped around the available USB 2.0 and SATA 3GB/s headers. 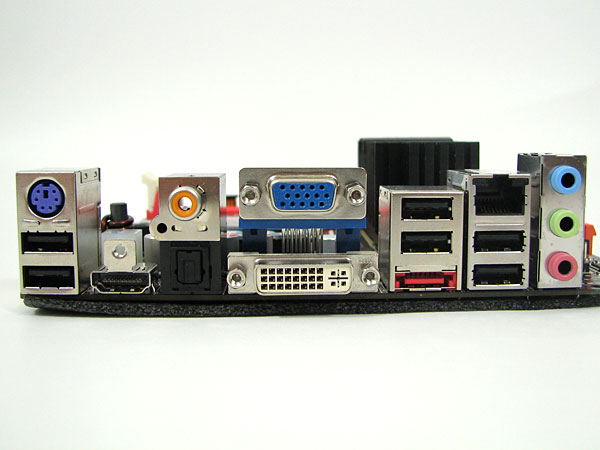 The back I/O panel on this board is caulked full of features, courtesy of its onboard 9300 chipset. Available ports include six USB 2.0 ports, HDMI, DVI, VGA, one eSATA port, Gigabit LAN jack, optical and coaxial audio inputs, PS/2 keyboard port, and three audio inputs for 5.1 high definition audio. All of these features makes this board an optimal solution for mid-range HTPC systems that can easily be hidden in a wooden box or tucked away neatly anywhere in someone’s entertainment center. 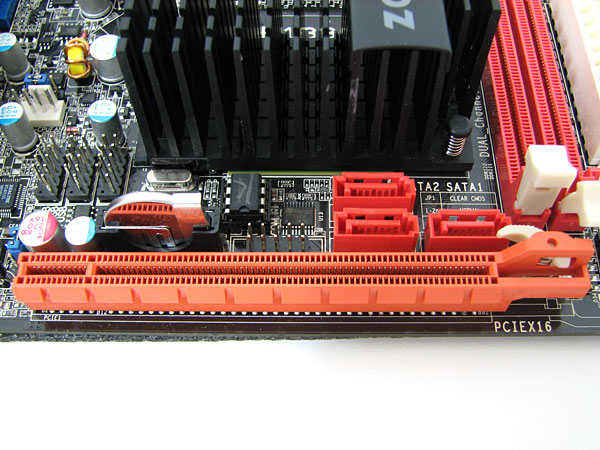 The bottom of the board hosts one PCI-E x16 expansion slot that is a key feature for those users looking to do some mid-range gaming on this board. Users are only limited by their power supply and mini ITX case as to which graphics cards they want to use with the 9300-ITX. We recommend using an NVIDIA-based video card so it can be used in tandem with the 9300’s built-in Hybrid SLI capabilities. Hybrid SLI allows both the onboard graphics and expansion graphics card to be used together during gaming and other GPU-intensive applications. 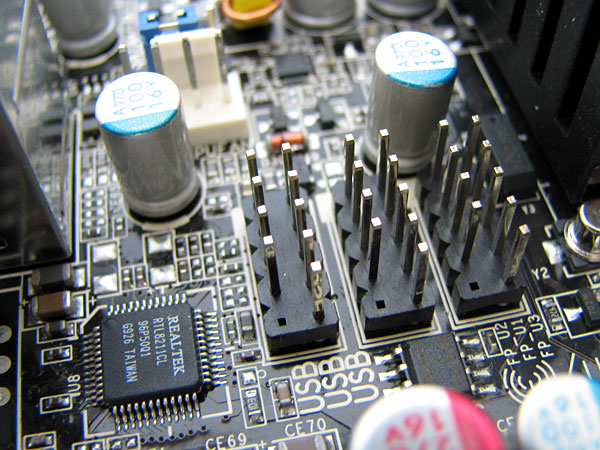 This board also can handle up to six more USB 2.0 devices through three onboard USB headers. Our readers can also see the Realtek RTL3211CL chip that controls the Gigabit LAN jack on the back I/O panel. 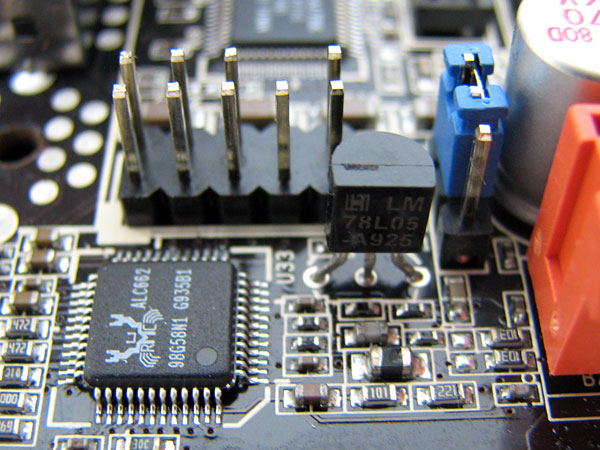 Zotac also used another Realtek chip for their audio solution. The chip seen here is an ALC662 controller that manages the 5.1 audio on this board. Our readers can also see the blue jumper for clearing the CMOS and the front panel audio header above. 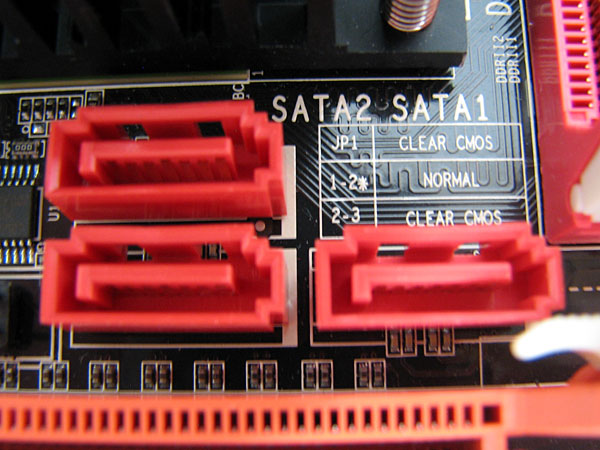 Here’s a close-up shot of the three available SATA 3GB/s ports that are located above the PCI-E slot at the bottom of the motherboard. These SATA ports can also handle RAID 0, 1, and 5. 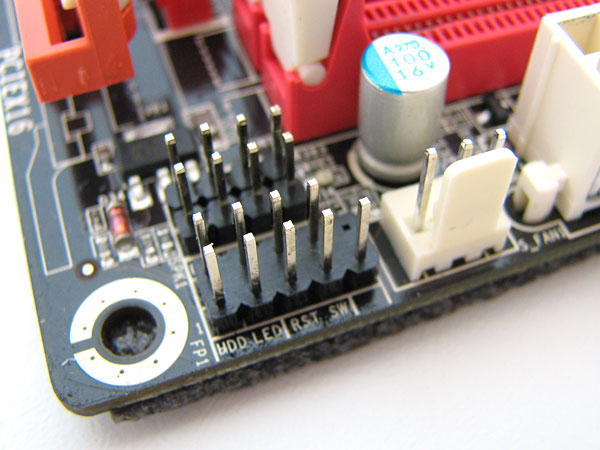 The bottom right-hand corner of the board is where all the front panel devices are connected. There is also one of two available three-pin fan power connectors available in this section of the board. 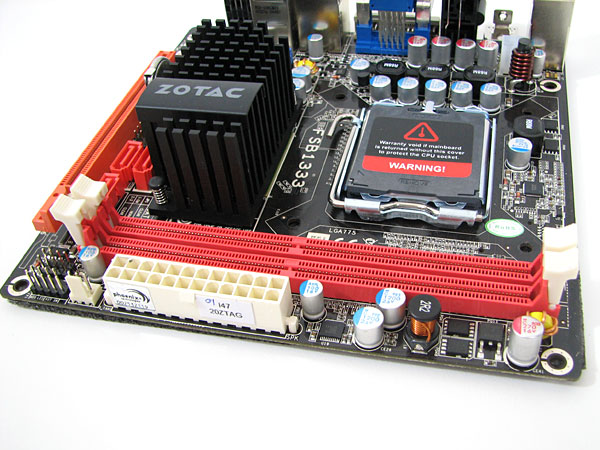 The entire right side of the board supports up to 8GBs of DDR2 667 or 800mhz memory. This might not seem like a lot, but it’s more than adequate for more user’s individual requirements. 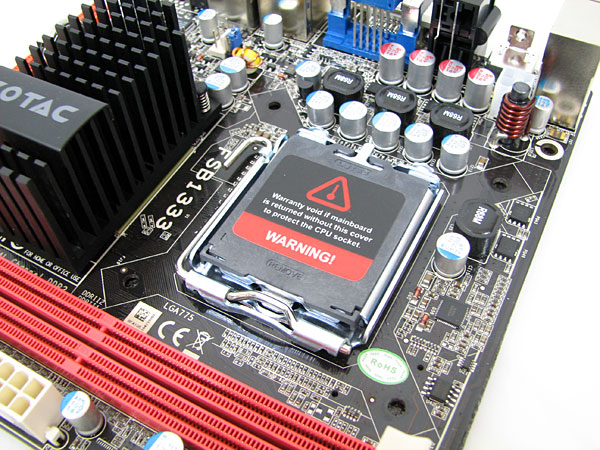 As I stated before, the space around the CPU socket is free and clear of power capacitors that could make installing a third-party heatsink more challenging. 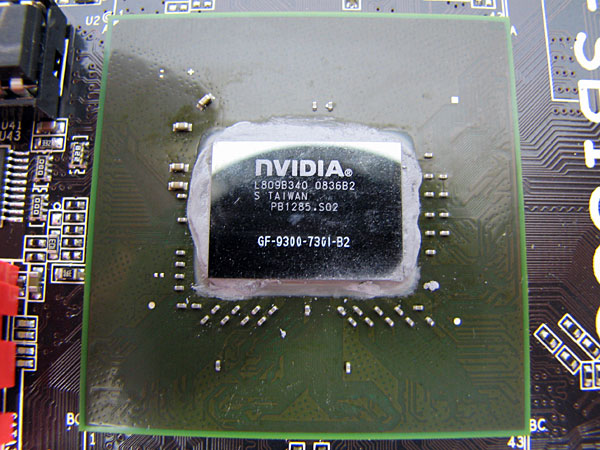 Finally, we wanted to take an up-close and personal look at the 9300 chip itself. This chip utilizes NVIDIA’s CUDA parallel processing technology, which will off load alot of the video transcoding and playback from the CPU to the mGPU. 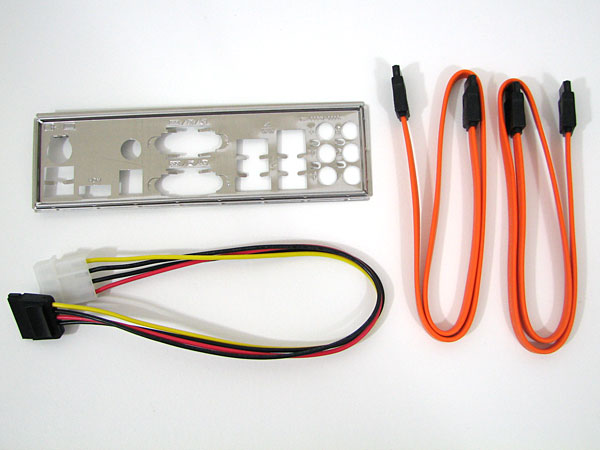 For included extras, Zotac threw in two SATA cables, one IDE to SATA power adapter, and a simple aluminum backplate. 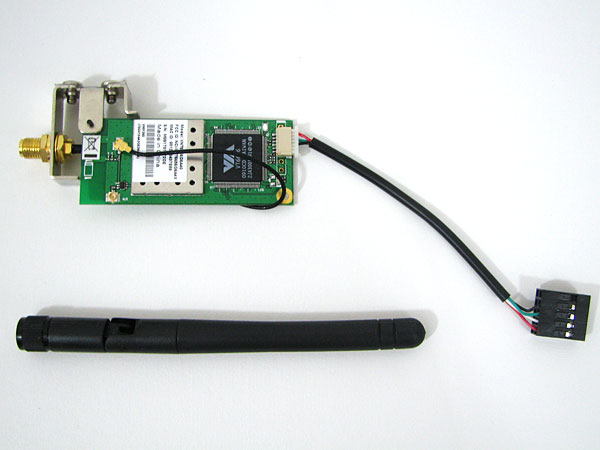 Zotac also bundled a wireless expansion card that connects to the board through one of the available USB headers. This card can connect to wireless B and G networks, but doesn’t work on N networks. This might not be a big deal to some, but I would have liked to have the capability to use N networks, especially since most wireless routers support this wireless specification. 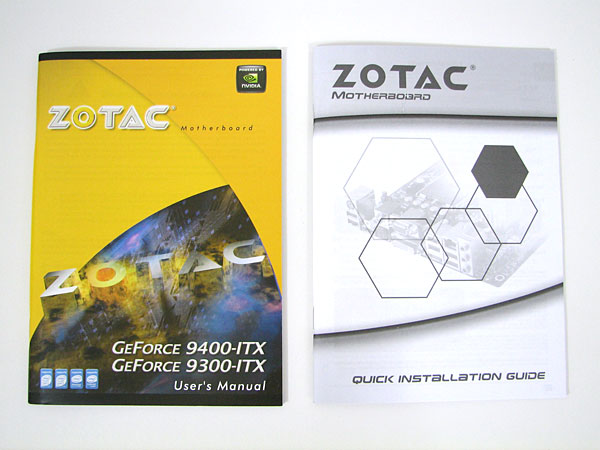 Lastly, we also received a user manual and quick installation guide. The installation guide is helpful for novice PC builders, but absolutely useless for the rest of us who have put together more than a few PCs in our time. 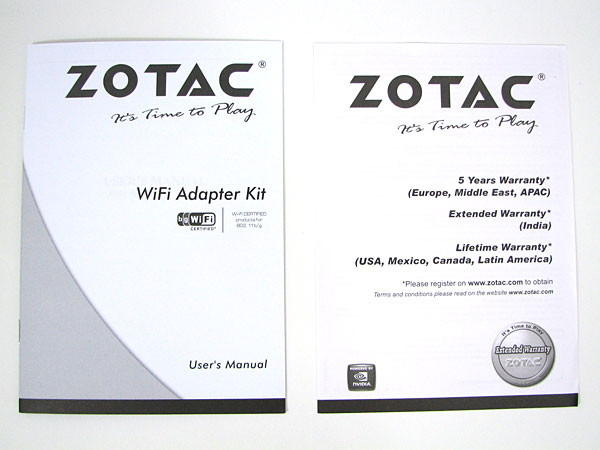 They also included a small guide on using and connecting the included WiFi adapter. Zotac also provided a short handout about the board’s lifetime warranty (only in U.S., Mexico, Canada, and Latin America. Europe, Middle East, and APAC will only receive a 5 year warranty on the product.) 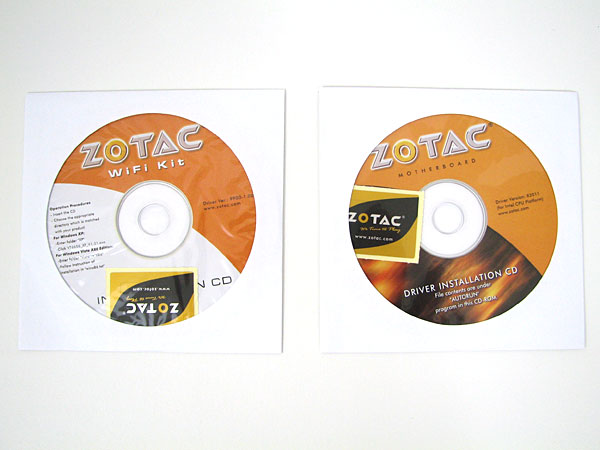 Lastly, we have the driver installation CD and Wifi driver and utility CD. All in all, a pretty impressive amount of extras that truly adds a lot of value to this motherboard.