Today sees the release of five new SKUs from AMD.  I will be reviewing four of them today, and the odd one of the bunch later (the Phenom II X4 910e).  They are as follows:

While the extra 100 MHz is not all that exciting, the price points at where each one exists gives much cause for rejoicing.  Each product somewhat stands out due to their combination of cores, clockspeed, power, and price. 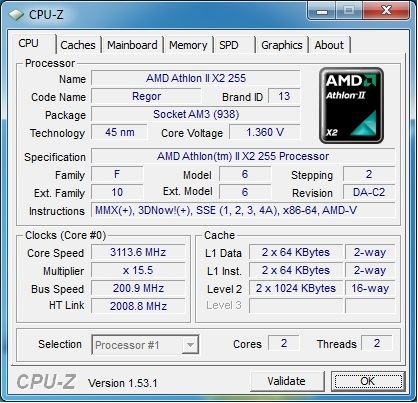 The voltage on this chip is a bit higher than I would have expected (or wanted), but it still runs nice and cool with a decent fan and heatsink.


The bottom of the lineup, the Athlon II X2 255, is really an outstanding bargain for a dual core processor.  The expanded L2 cache of each core is a welcome change, especially when considering how many applications really like extra cache on the processor.  Games really seem to eat up extra cache space in a hurry, and this product clocked at 3.1 GHz should give any budget enthusiast a good experience.  This processor, combined with a 785G based motherboard, can be the perfect causal gaming machine, as well as office productivity and video streaming.  People that are heavy into video transcoding should be looking elsewhere, namely at more cores.  While this processor can overclock as well as any of the previous Athlon IIs, for $20 a much better overclocking part is available (with better dual core performance to boot). 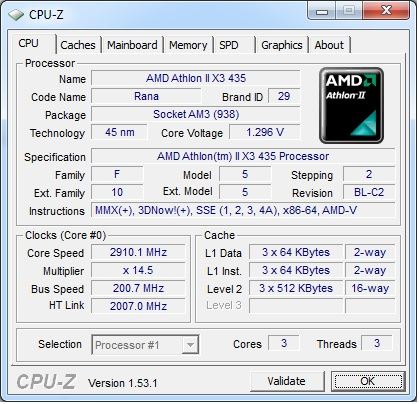 This CPU was actually released two months ago, but I was unable to get it covered until now.  Note the voltage of this one compared to the X2.


Next up is the X3 440.  The Athlon II X3 parts are the newest entry into AMD’s budget lineup, with the X3 435 being the first member introduced last year.  Unlike the Athlon II X2, the X3s have a totally different die, and as such has ½ the L2 cache as the X2 version.  This does affect overall performance when looking at single core applications running at the same clockspeed, but the third core makes a huge overall difference when dealing with multi-threaded apps (that can recognize odd numbers of cores).  At 3 GHz this processor again has the horsepower to drive any game on the market.  It allows seamless transitions in office applications in multi-tasking setups.  It is a step up when it comes to transcoding videos from the dual core, it is also $15 cheaper and 200 MHz faster than the older X4 630.  For those whose workloads demand more cores, but still can utilize the faster clockspeeds, then this is a nice middle ground. 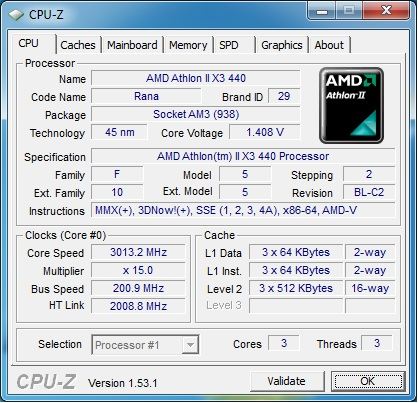 Interesting, add another 100 MHz and the voltage goes from nearly 1.3 v to 1.4 v.  Not exactly a conspiracy or controversy, but very interesting from a manufacturing standpoint.


The Athlon II X4 635 is being offered at a slightly lower price than its predecessor when it was introduced, and has the added benefit of pushing the current X4 630 down to the $99 price point.  The extra 100 MHz does very little overall, but it is a nice step up for those debating between the new Intel i3 dual cores and the native AMD quad core Athlon IIs.  This is the best budget chip for those who work exclusively in heavily threaded applications.  Obviously the best bet for video work as well. 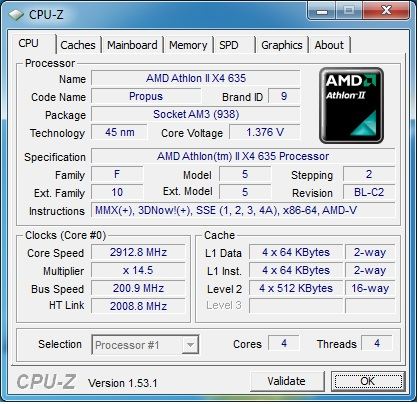 And rounding out the Athlon II lineup, the full quad core X4 635.


The next chip is one which should make a lot of enthusiasts very happy.  The Phenom II X2 555 is the successor to the wildly popular X2 550.  While the extra 100 MHz is nice, plus the same $99 price point, the big news is that every X2 555 being released is made with the new Revision C3 core.  This should allow for much more extensive overclocking than the previous product, plus lower overall heat and power consumption (even though both are rated at 80 watts TDP).  This product was originally a quad core die, but due to potential defects or poor TDP results, two of the dies were disabled.  For those willing to test their luck and attempt to unlock those disabled cores, this is easily done by using the ACC functionality on motherboards that use the SB710 and SB750 southbridges.  AMD obviously does not guarantee success with unlocking cores, but if the buyer is one of the lucky few, they can get a fully functional Phenom II X2 955 for nearly half the price.  My luck with successfully unlocking extra cores on these parts has been poor at best.  The 6 MB of L3 cache is a boon for this processor.  It should see a good boost overall from the cheaper Athlon II X2 255, and not just simply from the extra 100 MHz.  This is one of the better gaming chips around, as games still do not heavily leverage more than two cores, but they do eat up a lot of cache. 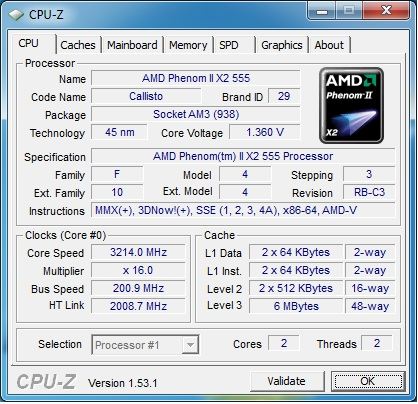 The Phenom II X2 555 is a really fun CPU to play with if a user is not afraid to tweak their setup.


The final part being released today is the Phenom II X4 910e.  Last year AMD released energy efficient triple and quad core Phenom II parts, but these were stuck at 2.5 GHz at most.  These 65 watt parts are excellent performers in applications such as home theater PCs and small form factor workstations.  Improvements from GF and the use of the Rev. C3 core makes this processor 100 MHz faster, but still fits in the 65 watt TDP envelope.  The four cores plus the full L3 cache makes this chip a very able performer in all applications.  This chip is not unlocked, and it is not the overclocker that some hope it to be.  When the energy efficient batches of wafers are sent through the fab, GF focuses on decreasing leakage, which has a negative effect on overall transistor switching speed.  So while a couple hundred MHz can be squeezed from this chip, a 3.6 GHz overclock is simply out of the question. 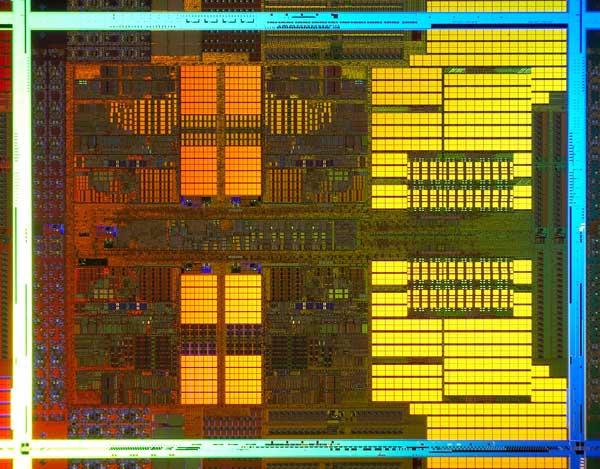