The results here are pretty interesting: in CB10, POV-Ray, Euler 3D and Handbrake the Core i5-661 is not very competitive in the price to performance ratio.  Where it does shine is in the gaming side of things where it leads in both the Valve Particle test and Far Cry 2 and almost beats the Q8400 in World in Conflict.

I didn’t spend a whole lot of time overclocking our Clarkdale sample but was able to get some fairly impressive results when I paired it with the ASUS H57 motherboard:

Not too bad!  That is a nice 1.0 GHz increase from the base clock speed and was done with a modest voltage increase only.  More on what we can squeeze out of these CPUs after CES!

In terms of pure processing performance, the new Clarkdale Core i5-661 didn’t set any kind of records.  But we didn’t expect it to really – these are low cost parts for a segment even below those of the Core i5/i7 processors of the Lynnfield moniker.  Essentially, Intel has built a replacement for the dual-core Core 2 parts that still litter the shelves of MicroCenter and Newegg and compared to those, the Core i5-661 offers a lot of compelling reasons to upgrade and transition.

Because this is the first dual-core variant of the Nehalem architecture it does fall short of a lot of the performance metrics we have come to expect from new Intel processors.  We are used to the quad-core 8-thread computing monsters that can blow through any benchmark and leave any and all competition from AMD in the dust.  The Core i5-661 and the rest of the Clarkdale line up were meant to do this – they were aimed squarely at getting the 32nm technology into the largest and most profitable markets. 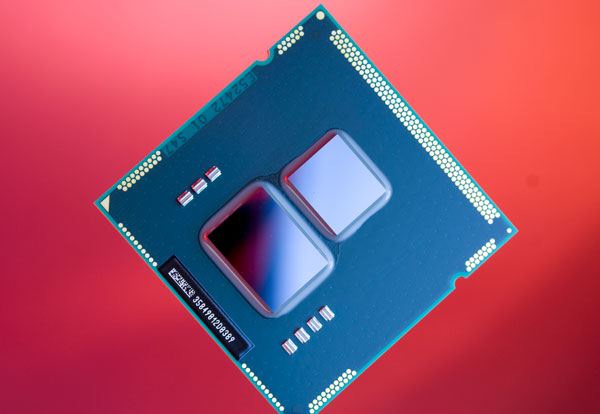 Even though the Westmere architecture moved the memory controller out of the primary CPU cores onto a separate die, I was glad to see that the performance drop offs related to this change seemed limited to our synthetic application benchmarks – nothing real world.

In most of my benchmarks the Core i5-661 was able to beat out the performance of the Core 2 E8500 but only in a handful of instances was it able to outperform the much older Core 2 Quad processors like the Q8400 or the Q9650.  That could be a bit troublesome as it doesn’t push any consumers that have those existing configurations (and are happy with them) to move on to the slightly better platform.

So if the standard computing performance was not that spectacular on the Core i5-661 what does the new Westmere architecture and Clarkdale CPU have going for it?  There are some other improvements that are really worth noting here that stem mainly from the new GPU integrated on the processor.  Let’s get this part out of the way first though: I will still never recommend gaming on Intel HD Graphics, despite Intel’s claims to the contrary.  They can keep telling us that their IGP architecture is designed for games like Spore and Sims 3 all they want, and they may play them reasonably, but the truth is you will always be better off with the purchase of even a $50 discrete graphics cards.

Where Intel’s team has a much compelling argument for HD Graphics is with HD video playback.  The IGP on the Clarkdale GPUs is capable of offloading dual streams from Blu-ray discs – more or less the current pinnacle for HD video processing.  The audio support of the platform is also incredibly impressive – the chipset supports 7.1 channel bit streaming Dolby TrueHD and DTS HD Master audio.  That means even the least expensive system built on the Clarkdale platform will be able power a damn nice HTPC!

Here is another contention area for me – pricing of the higher end Clarkdale processors.  The Core i5-661 and Core i5-660 (difference in TDP and IGP clock speed) will run you $196 while the Core i5-670 will cost you $284.  For reference, the Core i5-750 based on the Lynnfield processor will cost about $196 and the Core i7-860 will be about $280.  Coincidence?  For the same cost you are getting half the cores and processing power but you gain the advantages of the integrated graphics.  This will make a lot of sense for some HTPC goodies and OEM-based desktop computers but not for anyone building a system that they are sure is going to see a discrete graphics card as well.

As for the availability of these processors and the associated H57 motherboards, be prepared to see them available in just about a week.

We have Westmere parts in our hands (a bit earlier than we expected last year) with Clarkdale and while I am impressed to see the technology working, the processor really fills a specific market segment.  The most specific thing I can say to a potential buyer of a Clarkdale processor is this: it only makes sense to buy one if you are going to utilize the integrated graphics.  If you plan on adding a discrete graphics card anyway, then it makes more sense to use that processor budget for a Lynnfield part.

The exception to this?  Extreme low cost requirements.  You can get a Core i3 processor for $113 that will give you similar levels of CPU performance but without the Turbo Mode features.  You still get the Intel HD Graphics and HyperThreading support so you could create a nice HTPC system for minimal cost by pairing it with one of the Intel HD55TC mATX motherboards or another option.


If you have questions or comments about this article, please head into this thread of the PC Perspective Forums to discuss!!!

The Tech Report got a package from Barcelona