NVIDIA is putting its efforts into what has emerged to become one of the hot technology trends of the year – 3D entertainment. With the proliferation of 120Hz displays, content recorded in 3D,  and many new products being announced that support this technology (like the Panasonic 3D video camera), the GPU maker is leveraging its existing and future products to deliver 3D gaming to you – RIGHT NOW!

NVIDIA has announced their new innovation – NVIDIA 3D Vision. By combining a pair of glasses, a 120Hz display, and a pair of NVIDIA GPUs in SLI, you have unlocked a new dimension to your existing and future PC games. While 3D Vision Surround will be launched with GF100 GPUs in Q1 this year, the good news is that 3D Vision is already supported in the GT200 family too!

All you need is the minimum requirement and you’re ready to rock. Since many of you reading this are enthusiasts with SLI rigs already, I think many of you just got a pretty awesome gift from NVIDIA.

Requirements:
While the requirements may make some of you balk, 120Hz desktop displays and the required GPU(s) are easily within reach, if not now, then within a few months as technology prices inevitably fall.

I think this technology should make many of you very excited about your NVIDIA setups again. 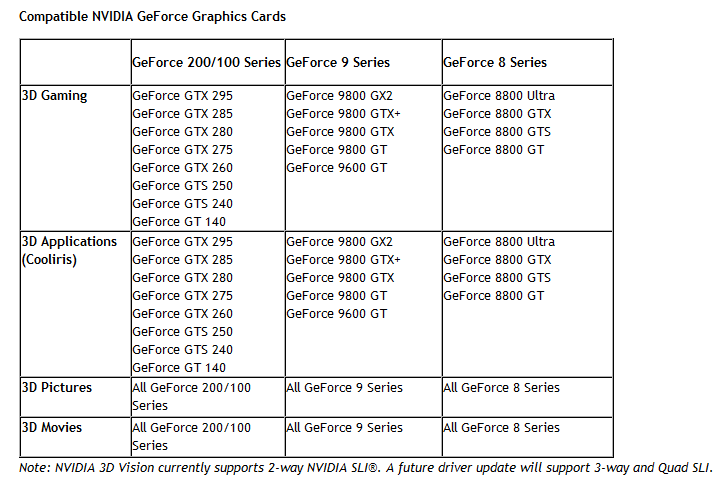