I posted this update to the last page of our recent OnLive Gaming Service Preview, but I thought it was worth putting on the home page as well since it was a direct response to something OnLive posted on their site.  Enjoy!

Please note that due to legal actions being taken against us including a DMCA notice given to our website hosting service, we have removed all of OnLive’s logos from this article.  I apologize that this screws up the preview just a bit, but the words are still 100% the same as they were when originally published!

I have been been getting a lot of interesting feedback on this article (both from readers and lawyers actually) but one piece was more interesting in that it comes from OnLive directly.  In an obvious response to some of the issues in this preview and a lot of the feedback to my article, OnLive CEO Steve Perlman posted a blog entry that discusses how latency is important to the OnLive streaming game service.  I love this kind of communication and debate on the topic!  This, in reality, was the sole purpose of my preview here: to facilitate further discussion and debate.  There are a couple of key points here:

If you are more than 1000 miles from an OnLive data center, then the round trip communications delay (“ping” time) between your home and OnLive will be too long for fast-action video games

While I understand Perlman’s intent here, that is a blanket statement that just can’t apply 100% of the time.  In a world where my computer has to talk to 14 different systems before it reaches pcper.com, any of those could cause a delay even if I am 100 miles from the physical server.  The same is true for OnLive customers.  Does being closer tend to help?  Sure.  Is it a guarantee of great performance (or bad performance outside 1000 miles)?  Nope.

Also, with a blanket statement like that we get no indication of a real-world numerical value associated with the latency that is low enough to be considered "good" by OnLive.  Are they estimating that the good pings within 1000 miles are going to be under 80ms?  Under 50ms?  Some clarification here would be of great assistance to their cause and to consumers accepting this as an feasible gaming option. 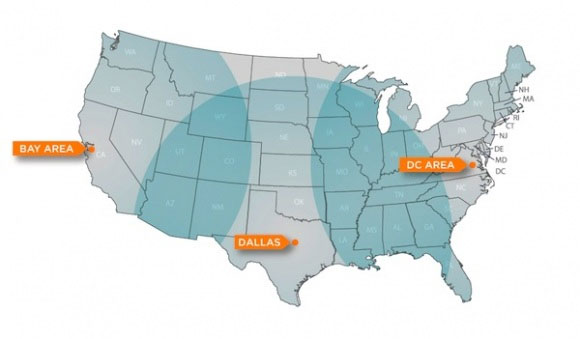 Imagine a map of the continental US with three servers located in California, Dallas and the DC area.  Or you can view that image here too.

Another point to counter our arguments, this does verify (as I predicted at the outset of this article) that I was indeed connecting to the west coast.  Why they would configure the system this way is completely beyond me, but apparently they are going to be better managing connections once the service goes live this year.

And, depending on how your Beta account was configured for the characteristics of your home ISP, you may see degraded image quality or controller/mouse performance on a different ISP.

This I don’t really understand – unless they are basing that on Cable/DSL connections and amount of available bandwidth they estimate the OnLive user to have access to.  Since my service runs at about 20 Mb/s usually, I don’t think any of the image quality issues I saw were related to my location or ISP configuration – but the lag and latency issues definitely were.  Again, this is something I stated right at the beginning of the preview.

I want to reiterate that I enjoy the commentary from our readers who are both impressed with what we saw and those that were disappointed.  It’s all about the discussion!  Obviously at this point OnLive has locked me out of the beta service so I don’t think they’ll be giving me another chance at testing OnLive using the east coast server…but if they offer, I’ll accept!  And again, as I mention throughout this preview, I actually have been more impressed with the performance and experience OnLive has provided that I expected going into the testing period – I would call that a win for the service in this early state.

Time for nVIDIA to switch drivers 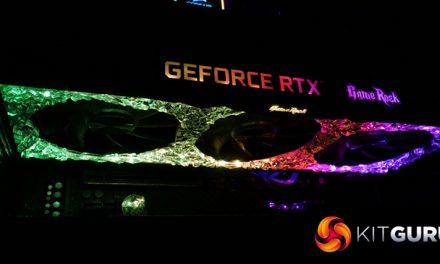