So while the features mentioned on the previous page in the new Catalyst 10.2 are available immediately, there are some other changes coming out next month with the 10.3 release that are even more exciting!

Yes, NVIDIA still has the edge here with their 3D Vision support (and upcoming multi-monitor 3D Vision Surround) but AMD is implementing the correct hooks for third-party middleware stereoscopic APIs.  I question whether or not any of these will ever take off though with the passive support that AMD is famous for… 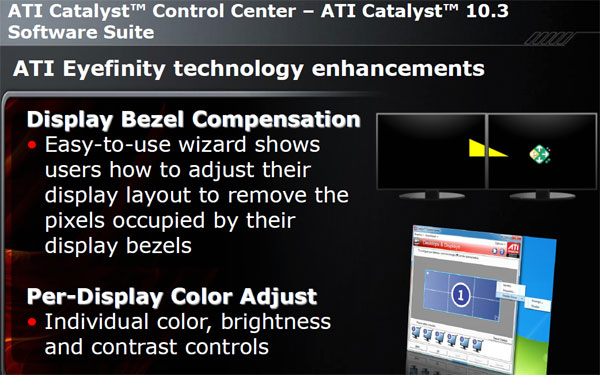 This is big news for Eyefinity users – bezel correction!  This feature will allow the user to calibrate their multi-monitor display to correct for the bezels widths between the actually LCD panels.  Essentially, rather than have images or models be “broken” by the bezel (part show up on the left side, part on the right) the driver will simulate those pixels as being “behind” the bezels so the illusion of a single images should be much more enjoyable.  (For examples of this, check out HardOCP’s coverage of the feature.)

You will also now be able to adjust the color on each monitor separately – a noteworthy feature for users that want to get the color matching between different panels as exact as possible without external hardware/software. 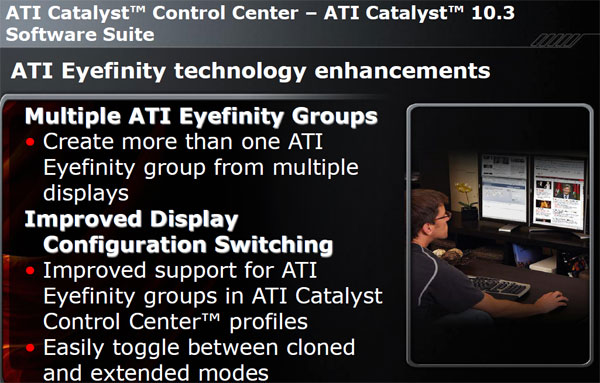 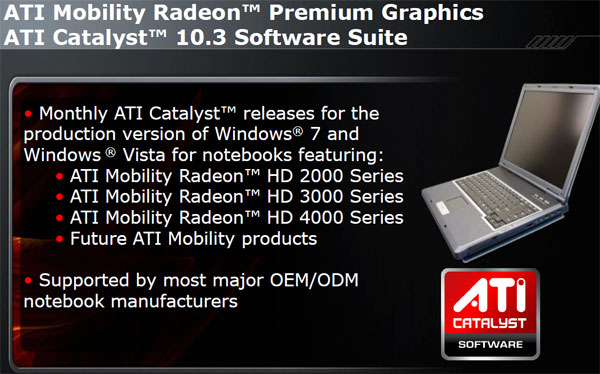 And finally, much as NVIDIA has been doing for a while with their Verde driver, AMD is now going to start offering mobility Catalyst drivers that will install in MOST notebooks so that mobile gamers can have the most up to date gaming performance.

At PC Perspective we love to see innovation and improvement in existing technologies and AMD is truly accomplishing both with their 10.2 driver and 10.3 driver coming next month.  Though NVIDIA eventually might apply the auto-updating profile system used for Optimus to SLI technology, for now AMD has the advantage for multi-GPU user experience with the easy CrossFire profile updates.  Finally getting updates for multi-GPU Eyefinity is a strength as well as are the power benefits and DisplayPort audio, though less so.  The CrossFire re-architecture is something that will only be taken advantage of down the road.

Catalyst 10.3 will be even more impressive I think, finally bringing bezel correction to Eyefinity (hopefully before NVIDIA’s Fermi drivers are released with the same feature) along with other Eyefinity improvements like color control, multiple groups and switchable configurations.  I have been a big fan of Eyefinity since the HD 5870 was first released and these updates are long coming and necessary in my opinion.  And finally, the 10.3 update will be the first to offer frequent driver updates to mobile ATI Radeon users; with the emphasis on mobile computing in the past 2+ years this is necessary in today’s world.

If you are an AMD graphics card owner with either multiple-GPUs or multiple-displays, the Catalyst 10.2 and 10.3 drivers offer some fantastic upgrades in options and features along with the normal performance and compatibility improvements.  Keep ’em coming!