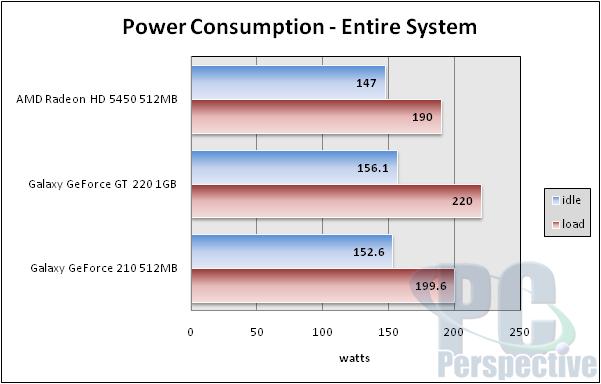 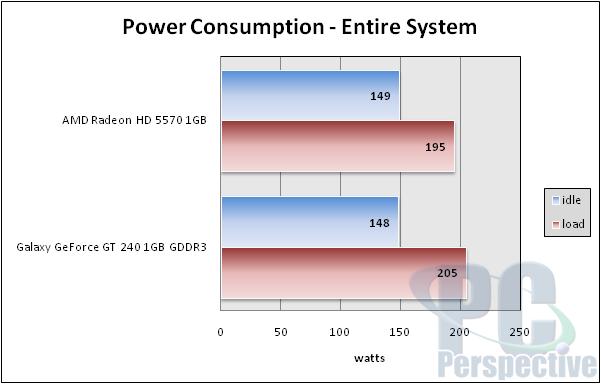 If nothing else, the AMD cards have the advantage when it comes to power consumption when held up against NVIDIA’s offerings.  The GT 220 that beat out the HD 5450 at every turn did so using about 15% more power – obviously had AMD pumped up the power (with either speed or additional shaders) then the HD 5450 could have had a better gaming experience.  Instead it appears that AMD is quite happy to let the performance question linger and let the features of the lower end 5000-series cards stand for themselves.

In its own internal documentation, AMD was only pitting the HD 5450 against the GeForce 210 – and for obvious reasons.  The GeForce GT 220 was a far superior card when we look at gaming performance that much we can saw with 100% certainty.  Of course, at low-end markets like that are very price sensitive, we need to note that the GT 220 can cost as much as $20 more than the Radeon HD 5450 in some outlying cases including retail environments and just selecting different iterations of each GPU online.  The HD 5450 was able to give us a decent gaming experience at the 1680×1050 resolution we tested it at though I would admit that even this low of a resolution and image quality settings were probably not the ideal selection; I would move another step down in either resolution or quality settings for the best gaming experience with this card. 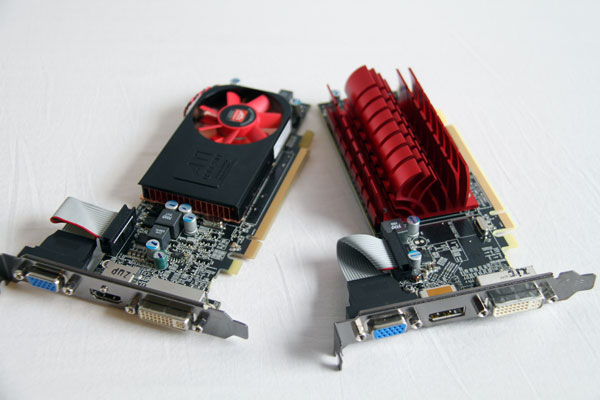 The Radeon HD 5570 performed a bit better when compared to its direct price competitor, the GeForce GT 240.  Both can be found for about the same price and both were able to reliably give us a great gaming experience at 1680×1050 even with antialiasing enabled and with higher IQ settings than what was used in our HD 5450 benchmarks.  The GT 240 did have a slight edge in most cases but that performance advantage was very slim.

With gaming performance being mostly a wash for the new low cost Evergreen parts, AMD is obviously going to be leaning on the features that it offers to sway consumers in their direction.  Both the HD 5450 and the HD 5570 complete AMD’s line of DX11 hardware though I would hesitate to call DX11 support a real bonus for gamers at this price level.  Most of the features and additions to the API that DX11 integrates are geared towards higher performing cards and those systems that can handle higher image quality settings.  The lone stand out MIGHT be the tessellation engine if developers are will to use it on cards of this caliber.  That will be something we have to check on down the road as the first games utilizing tessellation come to market; which I might add will be this month!

Along with DX11 is support for Eyefinity: great in theory but bad in practice for gaming purposes when referring to GPUs of this performance level.  While AMD did include performance results and claimed support for Eyefinity gaming on BOTH of these cards, in this reviewer’s opinion those users looking for multi-monitor gaming are not going to be doing it with sub-$100 GPUs.  If you want to buy a set of three LCD monitors for PC gaming it’s time to step up the HD 5850 or beyond!

Of course, just having the ability to connect three displays to your Radeon HD 5450 is a great feature for productivity and maybe even unique home theater uses.  As more and more users see the value of multiple monitors for every day computing then the multi-monitor gaming world might grow down the road. 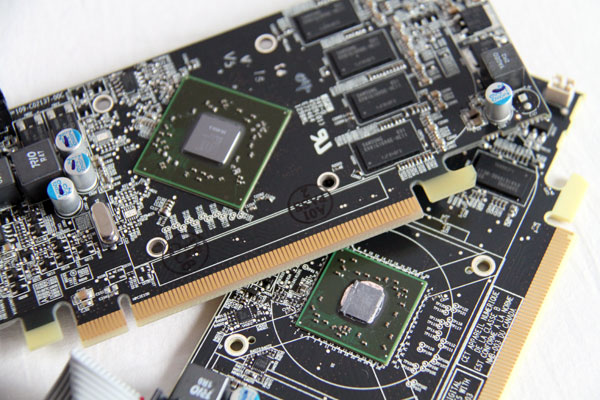 Let’s not forget that both the of these cards will offer you a great home theater experience that includes loss-less Blu-ray audio support and HDMI integration (or  via the DVI-to-HDMI adapter) and the HD 5450 does all of this while being cooled passively and silently.  If there is one area where these half-height cards will thrive it will be with enthusiast PC users that want a home theater PC that can also run some modest games at 1280×720 resolution.

The truth is these prices are all very tight and even for users on a budget, I wouldn’t think a $5 price swing in any direction would really be a deal-killer.  It is nice to see a lot of these GPUs available from several vendors and retailers as it means competition will be rampant and prices will either go lower or stay where they are at.  Though not the high-performance 40nm cores we might have been expecting, it is nice to see TSMC’s process is finally wide open.

It’s an odd feeling I have for the low end market of graphics cards over the past year or so.  Neither AMD nor NVIDIA have really come out with a new product that I felt really ran away from the pack or set some new performance standard for the $99 GPU.  When NVIDIA’s GeForce 210/220/240 cards were released they really didn’t push the boundaries of performance compared to the 9000-series of GeForce GPUs or even AMD’s 4670 and the likes.  Once again we see the exact same scenario: the HD 5450 and HD 5570 (and even the HD 5670 from January) are good cards but they don’t really overcome the performance of currently selling cards for the same price.

Either way, if you are in the market for a low-end graphics card for an upgrade over an integrated graphics solution or for a new HTPC then the Radeon HD 5450 and HD 5570 will likely fit the bill pretty nicely.  My favorite is probably the HD 5450 with its completely silent passive cooling solution and low power consumption along with the loss-less audio support and DisplayPort connectivity.  This card will very likely find its way into a new HTPC for the house this winter.