The new AMD Radeon HD 5830 continues to add to the company’s collection of DX11-ready graphics card hardware while we continue to wait and see what NVIDIA’s answer will offer consumers. The HD 5830 rests between the HD 5850 and the HD 5770 in terms of price and performance, but is it a better option than either? Also, we have some extra details on the upcoming HD 5870 Eyefinity Edition with 6 DisplayPort outputs!

How do enthusiasts love the AMD GPU team these days?  Let us count the ways:
Since September 23rd, 2009 AMD has released at least 8 new graphics card options for the consumer; from the initial release of the HD 5870 to the dual-GPU performance of the HD 5970 and even down the low cost HTPC and upgrade markets with the HD 5400 and HD 5500 series.  Not only that but there are more cards and SKUs that have been released that we haven’t even tested yet in the sub-$100 segment.  And today, AMD fills another price void with another GPU offering, the Radeon HD 5830 that will sit between the HD 5850 and HD 5770 in both price, and we are told, performance.

But will it be a better option for our readers than either abutting graphics card?  That has yet to be seen.

Cypress gets another member: The Radeon HD 5830

First, I need to clarify a misspelling of mine that I have apparently had since the first HD 5870 release back in September – Cypress -> Cyprus.  Really, can I be faulted? Apparently it really is “Cypress” so I’ll try to keep that straight from here on out.

In the world of AMD DX11-GPUs (Evergreen series) there are few different names you need to know.  Cypress is the primary part, the GPU that holds up to 1600 stream processors that both the HD 5870 and HD 5850 are based on.  The Juniper GPU is next and is completely different GPU spin that maxes out at 800 stream processors – about half the size and performance of the Cypress part – and is the basis of the HD 5770 and HD 5750 cards.  Below that comes the Redwood GPU used in the HD 5670 and HD 5570 cards with up to 400 stream processors (half of the Juniper part) and we end with the Cedar GPU that powers the HD 5400 series of cards with at most 80 SPs.

All of that detail is give you a frame of reference for the new Radeon HD 5830 launching today that is based on the Cypress GPU but with significantly fewer stream processors enabled compared to the flagship HD 5870.

The clock speeds on the HD 5830 reference cards are pretty high – notably faster than the HD 5850 but not quite up to the HD 5870.  What is interesting here is that the picture of the card is grayed out in an attempt to let us know that this card is going more along the route of the HD 5600/5500/5400 series and will focus on partner-designed boards rather than reference designs.  So while AMD did send out reference graphics cards for early testing the retail cards will not look like our test sample shown on the coming pages.  Performance should be right on course though. 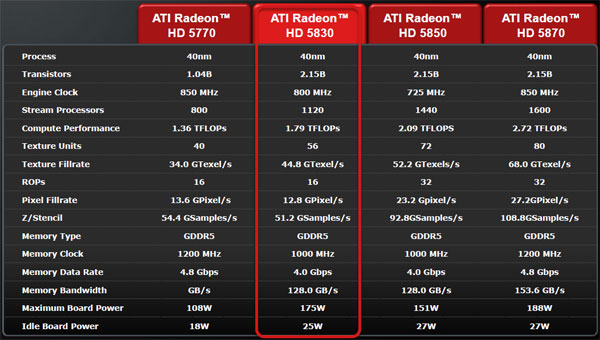 This table gives us a lot of great information and also introduces some interesting questions behind the HD 5830.  First you can see that this GPU, though priced much lower than the other HD 5800 cards, still holds 2.15 billion transistors though it will have a significant portion of them disabled.  While the HD 5870 card is running with 1600 stream processing units the HD 5830 uses only 1120 (or 6 fewer SIMD engines) – a drop of about 40% of the raw computing power.

You will also see that AMD has cut back on the texture units and thus the texture fill rate drops by about the same percentage.  However, look at the pixel fill rate difference here: it gets cut by more than half of the HD 5870 and in fact falls under that of the HD 5770 card that will be priced lower than the HD 5830. We are still using GDDR5 memory at the same clock rate of the HD 5850 so performance there is where we expected. 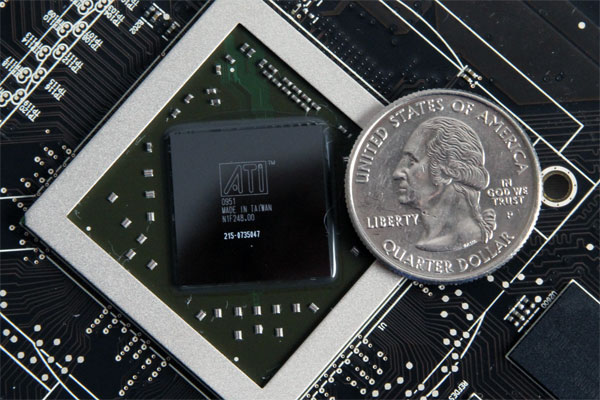 Finally, you will also note that the maximum power draw of the HD 5830 is actually HIGHER than that of the HD 5850.  Even with a drop in shader count the additional 75 MHz of clock speed is obviously enough to make this iteration of the Cypress GPU a little more power hungry than its bigger brother. 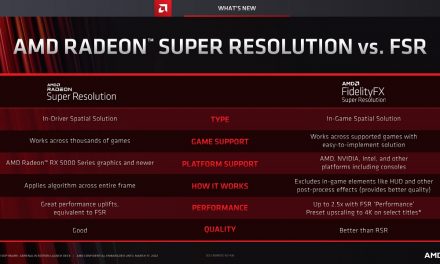