AMD gave the midrange market a thorough refresh with their HD 5600 and 5700 series of cards. Asus is attempting to capitalize on this new technology shift by introducing a somewhat unique and interesting product based on the HD 5750 graphics processor. Is the card as zippy as the psuedo-Formula 1 fan shroud promises it to be?

What can we say about Asus that readers do not already know?  They are the largest motherboard and graphics card maker in the world.  A Tier 1 manufacturer with a reputation for excellent build quality and top notch engineering.  Offices all over the world with an almost cult-like following from many users.  Very heady stuff. 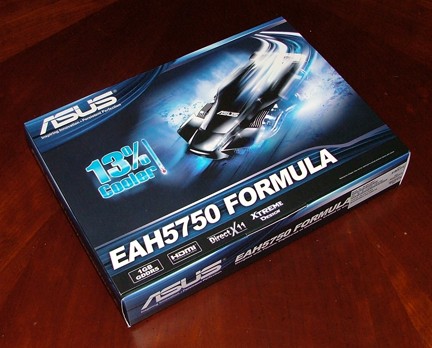 
Sure, Asus does not entirely have a clean track record through the years, but their hiccups have been minor.  About the most annoying thing that I remember was back around 10 years ago they would overvolt their clock crystal on certain motherboards, so the boards would appear to be clocked as usual, but in reality were slightly overclocked.  This lead to Asus having slightly faster motherboards at stock speeds, when they were in fact slightly overclocked.  This became annoying when actually trying to overclock a motherboard.  I remember this quite clearly because I had a piece of EMS PC133 E-SDRAM that was supposed to be CAS 2 at 137 MHz, but whenever I set that speed and timings the system would crash.  The memory was fine, the motherboard was just not telling me the truth.

That little piece of drama aside, Asus still is a great company to work with in terms of hardware, and their stuff is typically quite cutting edge.  The video card from Asus today is one of the first HD 5750s to step away from the reference design.

AMD has been on fire lately in the graphics world.  After the disappointment of the R600 (aka HD 2900 XT), AMD was able to turn their graphics boat around in fairly dramatic fashion.  The following high end product, the HD 3870, performed slightly better than the HD 2900 XT and cured the issues of manufacturability and power consumption/heat production.  The HD 4000 series re-wrote the book on price/performance and lead to a dramatic decrease in overall cost for midrange and high end products.  AMD stayed focused on what their goals were, what price points they needed to hit, and how engineering could help them achieve these goals with nicely performing parts that had die sizes that were not overly large to mass produce. 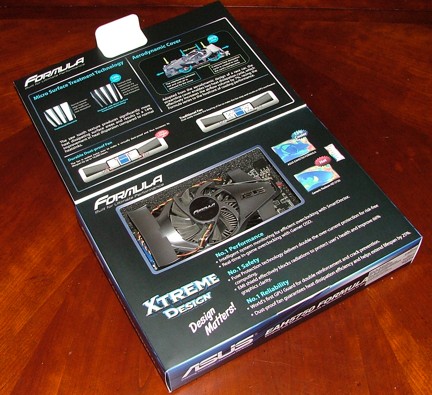 If it does not have some form of “Extreme” in there, it just isn’t a good video card!  All kidding aside, it is fun to see original packaging which displays the finer qualities of a video card.


The HD 5000 series harkens back to the ATI 9700 Pro days.  While NVIDIA had a dramatic lead in DX10 parts, the situation we have now is very reminiscent of when ATI had the first good DX9 part and NVIDIA was unable to follow up with anything competitive for a good period of time.  Today’s HD 5800 series of cards are the fastest out there for single GPU products, and they fully support DX11.  Soon after the release of the 5800 series we were able to get our hands on the 5700 series.  These products, while impressive, did not redefine overall performance for their price points as compared to the previous generation’s HD 4870.