The HD 5750 was actually the more impressive of the two midrange offerings, as it was offered at a pricepoint slightly higher than the previous HD 4850, but outperformed that part by a decent margin.  Unfortunately for users, the prices of the HD 5750 and HD 5770 rose dramatically from their respective MSRPs shortly after introduction.  Since then demand has leveled out, and AMD is able to meet that demand.  We are now finally seeing prices going back down to where they should be. 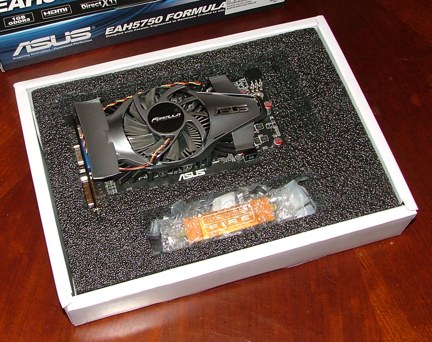 The card is nicely protected in the box, and that foam can stand up to some serious pressure.


The Evergreen family of parts is manufactured on TSMC’s 40 nm process.  While initially offered early last year for production, the overall opinion of many in the industry has been negative to how well TSMC has pulled it off.  It seems that only recently has it been robust enough to insure adequate numbers of chips made on that process to be delivered to partners.

The chip that powers the HD 5750 is codenamed Juniper.  This is essentially ½ of a HD 5800 chip, codenamed Cypress.  This chip is comprised of approximately 1.04 billion transistors taking up 166 mm squared of die space.  A fully functional Juniper chip has 800 stream units divided into 10 SIMD units, 40 texture units attached to those SIMDs, and 16 ROP partitions coloring all the pretty pixels.  The HD 5750 is a slightly cut down chip with portions fused off.  A 5750 features 720 stream units, 9 SIMDs, and 36 texture units.  It does keep the full 16 ROPs though.

The HD 5750 is also clocked a lot less aggressively than the full fledged HD 5770.  The core is running at a mild 700 MHz, with the 1 GB of GDDR-5 memory running at a decent 1150 MHz (4.6 GHz effective) giving it a total bandwidth over the 128 bit bus of 73.6 GB/sec.  What this effectively does though is lower the TDP of the card pretty dramatically.  It pulls 86 watts at load, which is quite impressive considering that it outperforms the HD 4850 which was pushing 150 watts. 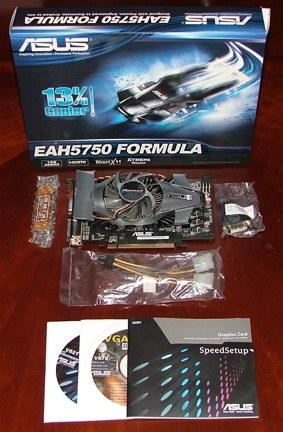 There was also a good reason why boxes in the past were so big… they had so many extras!  With a tightening of budgets all over, we are now greeted with fewer and fewer extras.  This is not a bad thing, as it does drive prices down and there is less waste involved.


AMD has also worked hard to push down power draw at idle.  The board is rated at a very low 16 watts at idle.  The chip has aggressive transistor gating and down clocking, and it is a marked improvement over the last generation of parts from AMD.

Direct X 11 is a top selling point for this chip, but it also adds in some nice features for video playback as well.  It can handle multiple HD video streams and apply Vector Adaptive De-interlacing to that HD content.  It also features edge enhancement and noise reduction as well.  The acceleration and playback quality get close to matching top end dedicated parts found in high end AV gear.  The chip also is able to bitstream HD audio such as Dolby TrueHD and DTS HD Master Audio, but this requires a playback software suite which supports this functionality.

Overall the Juniper chips are quite impressive for what they bring to the table.  Usable DX11 functionality is a big plus, and all of the other bells and whistles that we have come to expect are certainly in attendance.