Somebody at Asus thinks Formula 1 is pretty cool.  Of course, they are likely not alone in the world considering the overall popularity of that sport.  This is the second video card from Asus that uses the Formula 1 inspired fan shroud for the heatsink.  Luckily for us, Asus has other features native to the card that attempt to set it above the rest of the HD 5750 pack.

Asus claims that the Formula is 13% cooler than a standard HD 5750 and its reference cooler.  I don’t find this too shocking considering the light weight and design of the reference cooler.  The heatsink is smaller overall, but the fin design features grooves.  These grooves increase the surface area of the fins, plus it introduces turbulence to the airflow, both of which increase the cooling efficiency of the heatsink.  The card is billed as a single slot unit, but with the shroud and fan the card takes up two slots. 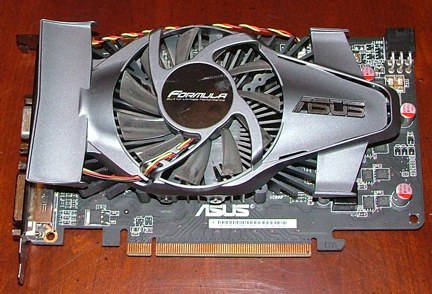 The board is nice and compact, and the heatsink does take up a goodly amount of space.  Whether or not it is 13% cooler is up for debate.


The fan is very quiet at stock speeds, and it features a dust-proof design.  The bearing area is sealed very well as compared to other fan designs.  This means that after several years of use, the Asus fan is more likely to be spinning at full speed vs. a fan design that is filled with dust and requires more power to spin at higher speeds.

The card does require the 6-pin PCI-E power plug to function.  The card pulls 86 watts, which is higher than the 75 watts maximum that a PCI-E x16 slot can provide.

The back of the card does not conform to the reference design.  Instead of the 1 Displayport, 1 HDMI, and 2 DVI inputs, it has 1 VGA, 1 HDMI, and 1 DVI port.  I am definitely not in love with this setup, as I appreciated the multi-monitor functionality of the standard design.  However, considering the performance of the HD 5750, Eyefinity setups with multi-monitor gaming is not a real option.  On the flip side though, people wanting to do production type work in a multi-monitor environment are going to have to look elsewhere.  Then again, how many business class cards have a plastic F1 racing shroud over the heatsink?

The card is not overclocked, but Asus does provide several software suites which improve that functionality.  SmartDoctor is the overclocking and hardware monitoring program Asus provides with the card and it does the job it is supposed to.  The only real shortcoming to this program is that it limits core overclocking to 780 MHz.  Considering that a fully functional HD 5770 is clocked natively at 850 MHz, one would think that quite a few HD 5750s can get close to that number.  GamerOSD is another application which runs a variety features that some gamers may be interested in.  It is almost like F.R.A.P.s and automatic overclocking combined.  It can capture video and screenshots, adjust color/brightness/contrast on the fly, and overclock the card depending on usage and user preferences. 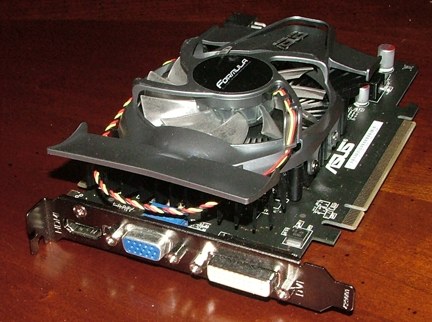 The card really isn’t driving away from us in this picture.  The video outputs are good enough for most people, but not entirely optimal for modern systems and displays.  Those who still have 2 x DB-15 based monitors on their desk probably wouldn’t complain though.


The build of the card is overall very good.  Nice use of solid caps throughout the design, and quite likely Asus has done a custom PCB.  The other big positive aspect of this card is that it is being offered right around the same price as a reference based HD 5750.  Users looking for a little extra something from their vid card and not caring about a slightly more flexible output setup would be quite interested in this card.  Personally I am not a fan of the shroud, but I also would be unlikely to use a transparent case where it could prove to be an eyesore.

The bundle that comes with the card is pretty basic.  It comes with the driver disk, a simple manual, a CrossFire cable, a HDMI to DVI adapter, and a 2 molex to 1 PCI-E power plug.  No free games or anything, which would have been nice, but far from necessary.

Asus has a strong packaging that should withstand most bumps and bruises.  The card will most likely arrive intact, short of a catastrophic crushing of the shipping box.