In a phone briefing today held by Intel to preempt the upcoming ISSCC conference (http://www.isscc.org/isscc/index.htm) details were released about the Westmere 6-core product otherwise known as Gulftown.  This processor, that will fit into existing LGA1366 processor sockets on current X58 consumer motherboards, will likely be released in the next 60 days or so but we are finally getting more details and information about what to expect.

Because the Gulftown CPU is built on Intel’s 32nm process technology, consumers will be getting a 50% increase in core count and a 50% increase in cache for the same power envelope as current 45nm LGA1366 processors.  Based on the Westmere architecture, Gulftown will once again re-integrate the triple-channel memory controller on-die; a change from the first Westmere parts that were released that were dual-core and moved a dual-channel memory controller to a second on-package chip coupled with integrated graphics.  (See our Clarkdale CPU coverage here.)  And just to clarify – Gulftown will not have integrated graphics on it.

The processor will have 12MB of L3 cache and include HyperThreading and Turbo Boost technology.  The die is 240mm^2 and consists of 1.17 billion transistors. 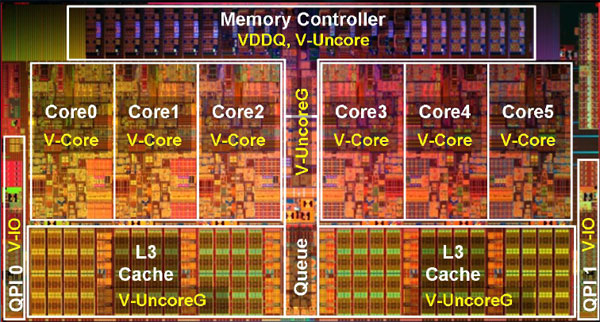 Gulftown will be released both as a consumer part as well as a Nehalem EP processor for servers and workstations.  This of course means a return to the world of Intel QuickPath Technology (QPI) as DMI will be limited to the mainstream processors of Lynnfield and Clarkdale.  Another interesting change on the Westmere-based processors is that Intel has added support for low-voltage DDR3 memory that will run with little as 1.35 volts compared to the 1.5 volts the controller is at today.

Intel also confirmed that there will be quad-core variants of the Westmere architecture coming soon but no other details on inclusion of graphics, etc, were divulged.