First off, the panel is large.  It only weighs around 48 pounds with the base, but if a user is used to an older CRT television, then a 47” LCD is going to look pretty massive.  While 52” to 65” panels are available, many people will find that they either can’t afford a larger screen, or simply do not have adequate space in their house for a panel that size.  For me, a 47” is about as large as I can get in my 1885 vintage house and its living room.

The anti-glare coating does cause a strange little shimmer, but this is true for any TV or computer monitor with anti-glare.  Once a movie is in full swing though, any issues with the anti-glare treatment are soon forgotten.

The output from the LCD is nice and bright, but not overbearing (or scorching to retinas).  LG’s out of the box settings do not oversaturate colors or cause it to be so bright as to make eyes bleed.  The picture wizard is probably enough for 95% of the people wanting a good large panel TV.  I did turn down the backlight some and adjusted the brightness down. 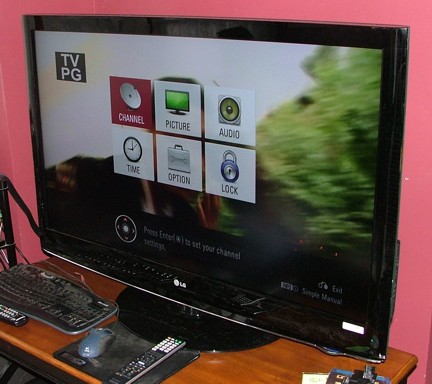 The OSD is well laid out and easy to navigate.  Every image quality setting under the sun can be found here.


Colors are the greatest strength of this panel.  Greens and blues, typically the weakest colors on most sets, are well represented and detailed.  Reds are not overbearing either.  The majority of content out there looks very rich, but without being oversaturated.  Flesh tones appear very natural, which can be tough for some panels.  The weakness is of course the richness and details of dark colors and black.  In a low light situation, the blacks appear washed out and exhibit a subtle glow.  Other panel types exhibit blacks better, and this is primarily an issue with IPS based LCDs.  This issue is not as glaring when there are more lights on, or the panel is viewed during the daytime.  The tradeoff between really dark blacks and really well represented colors is one that I am willing to accept.  Again, I do not watch TV and movies in a pitch black room, so I am not as annoyed by this as other users may be.

Ghosting is certainly a thing of the past, and I notice none of it in this panel.  Even in dark scenes with fast moving objects I have not noticed any ghosting.  Judder is also a non-issue with this particular panel.  After watching a good selection of content, I have not noticed any artifacts that could be construed as judder.  Text scrolls smoothly across the scene, and the only issues that I have noticed have actually been due to the source content being played rather than the LCD.

The onboard line enhancement and noise reduction work very well.  I prefer to have these at their medium settings.  These are very helpful when playing standard definition content.  When sitting close and watching how it works, I see that for the first few frames the noise is there, but then disappears.  It is not instantaneous, and requires a bit of time per scene to identify the noise and to fix it.  It is subtle, but if a user gets close enough and pays very good attention they can see what the TV is doing.  Line enhancement takes less time, and is a bit less noticeable.  But again, both of these technologies make viewing standard def content on a 1080p set a lot more enjoyable.

The 24p Real Cinema also works nicely when 24p content is played.  However, this content is not always easy to find, and I prefer to turn off the 24p support for the majority of my library.  The set also supports 3:2 pulldown, but any good DVD player or Blu-ray player should have that functionality already enabled.  For myself, I use a HTPC with the AMD 785G chipset, which already de-interlaces content, provides 3:2 pulldown, and a host of other image enhancing technologies.  Certainly people with older HTPC platforms or DVD players will want to utilize these features on their set.

Standard definition playback on this TV looks surprisingly good.  Even when stretching 4:3 content to 16:9, it does not look all that unnatural.  I have seen far worse stretching and “fisheye” type playback before, but on this particular set it seems almost as good as a true 16:9 image.  Pixelation from SD content does sometimes rear its ugly head, but that is more often seen in animation.  Overall the scenes look fairly smooth, but certainly not up to HD standards. 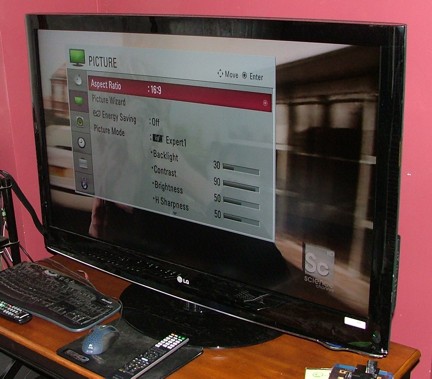 The Picture Wizard can be accessed from here, as well as other expert level adjustments.


480p DVD playback also looks very good.  Standard def DVDs are obviously not as detailed, and there is a lot more scene smoothing going on, but the overall effect is again not that bad even compared to true 1080p content.  While the overall smoothing is somewhat annoying after watching a 1080p disk, for someone walking through the door and sitting down, they would be hard pressed to tell one from another without doing some A/B testing, and being familiar with the content.

Gaming is a very positive aspect of this TV.  Both Xbox and PC games play perfectly fine and they look very, very nice.  While the older Xbox features a lot of jaggies, it is still very enjoyable to play Dead or Alive 3 again.  PC games at 1920×1080 look very good, and input lag was not too bad at all.  First person shooter games might be at a disadvantage, but having a vid card that can render DiRT 2 at 1080p resolution with full DX11 support is a fantastic experience.  It is really almost like looking over the hood of a car.  Throw in a good surround sound system and a sound card that can encode DD 5.1 or DTS audio and it turns into gaming nirvana.

The panel, that I could at least see, did not seem to have any stuck or dead pixels.  Solid black and white screens did not show off any bad pixels, and of course nothing showed up in moving scenes.  I was quite happy to see that there were no stuck pixels that I was aware of.  Newegg will replace a screen only if there are 8 pixels or more stuck or dead, so it was quite a relief when I saw that no pixels were defective.

Look at all the pretty colours