The monthly Steam Hardware Survey is almost like a staple in the PC gaming world as it gives us a snapshot of what the millions of people that use the PC gaming platform are using in their gaming rigs.  I know that most of the time we are focused on high-end technology like $400+ GPUs but it is always nice to get a taste of reality with these types of statistics and information.  What does the January version of this data tell us?

NVIDIA is currently dominating the game market landscape with 65% of the Steam users utilizing either an integrated or discrete graphics solutions from them.  ATI’s cards come in second with nearly 30% of the market and Intel comes in with just about 3.5% of the users’ systems.  As far as CPUs go, Intel is inside over 69% of the systems Steam surveyed with AMD making up the rest. 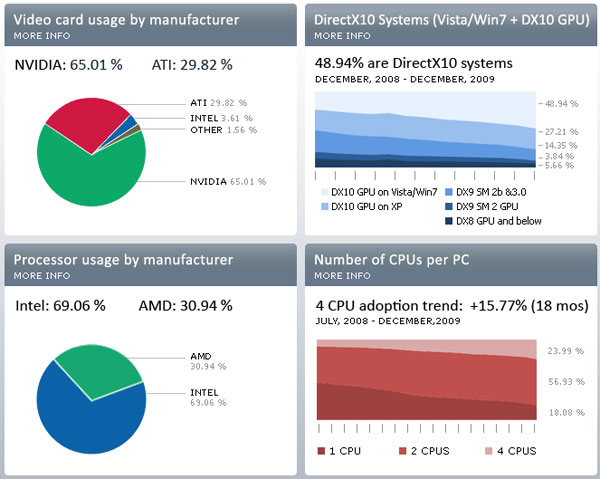 Another interesting statistic is that nearly 50% of the gaming market now has DirectX 10-capable hardware with the majority of those users on Windows Vista or Windows 7.  The most popular DX10 graphics card?  The GeForce 8800-series followed by the Radeon HD 4800-series.  What is unfortunate about this though is that the most popular driver revisions are actually quite old: from August or September of 2009.  For SLI and CrossFire fans, you should know you are in the strong minority as only 2% of users have more than one GPU. 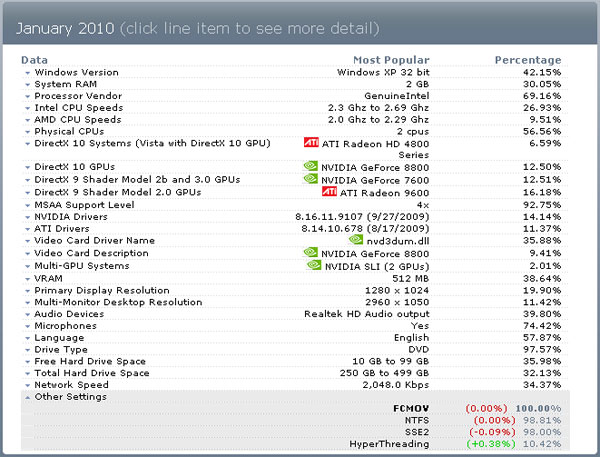 Also, the adoption of quad-core processors seems to be picking up with a 15% growth rate in the last 18 months according to these results.

Feel free to parse through the data on your own and see how “1337” you truly are here: http://store.steampowered.com/hwsurvey