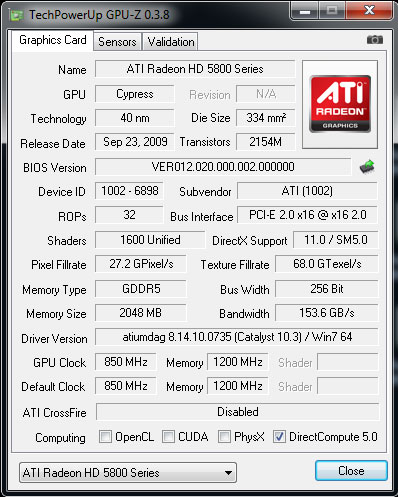 
After our GTX 480 review from last week I got some heat for not using the most up-to-date drivers available at the time.  (I used 10.1 or 10.2 Catalyst drivers rather than 10.3.)  Rather than lament with readers about the pains of the review process I decided to just shut up and fix it.  This time we are testing the HD 5870 E6 with the latest 10.3s (as expected) but have also included results from a retail purchased HIS Radeon HD 5870 1GB OC card using the 10.3s as well.

We are using the same gaming titles seen last week in our GF100 launch article so there shouldn’t be any surprises there.  The new HD 5870 E6 card is going to be compared to the standard 1GB variant of the HD 5870 as well as the GTX 480 and GTX 470 for a good overall view of how this card will stand in the market come April 12th or so.  There is only one caveat: the standard HD 5870 we are comparing with the E6 card is actually a slightly overclocked card – but only by 25 MHz on the memory and 50 MHz on the core.  That is about 5% theoretical performance difference possible over the stock frequency and I quickly became interested to see if the added 1GB of memory was as valuable or more so than 50 MHz in clock speed.