Benchmarks with 3-Way SLI on the new GTX 480, we salivate

Some of you will claim that getting benchmark numbers from a company that sells NVIDIA products (as well as AMD products) isn’t the best idea; to each their own but we happen to know this “Morley” fella from MAINGEAR pretty well and I think his results are reliable.  Either way, the data he is providing in his most recently blog post is interesting to evaluate.  Morley took a set of three GeForce GTX 480s, the very same reference cards that we reviewed yesterday, and ran some benchmarks to see how dual- and triple-SLI configurations scaled. 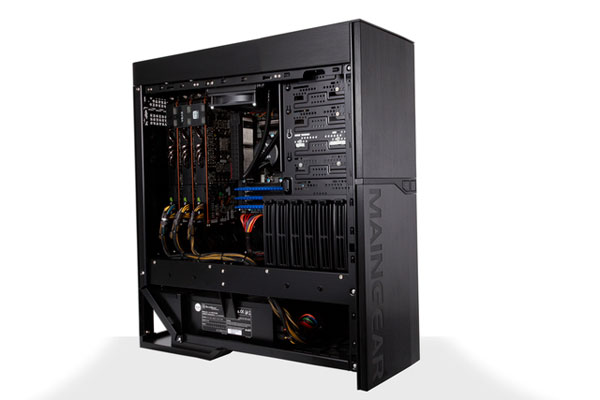 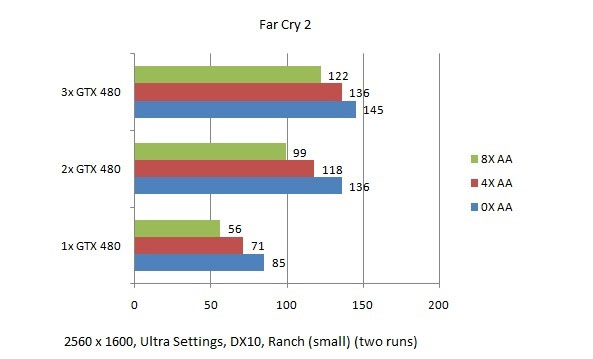 Looking at the top image quality settings, Morley gets scaling percentages of 76% by adding a second GTX 480 and then sees another 23% or so adding in the third card.  Crysis Warhead sees similar performance gains with an 86% boost adding the second GPU and another 35% with the third card. 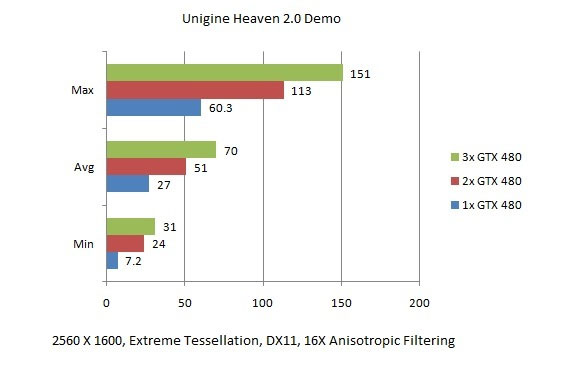 The Unigine Heaven 2.0 benchmark that Morley ran in its most difficult tessellation mode sees slightly better scaling of performance: 88% in average frame rate by adding a second GTX 480 and then another 37% with the third card.

Obviously the scaling results by adding a second GPU are worth noting and could be worth the investment for some gamers out there.  I think adding in yet another $500 graphics card for a 20-30% boost of additional power is more than a stretch.  Will NVIDIA let us run 6 displays on that configuration though…?  I don’t think so but the thought might change our mind on the viability of a 3-Way SLI system.  There are other considerations for potential multi-GPU customers: why kind of cooling solution will you need for three GTX 480s and is the 1200 watt power supply you have your eye on even going to be enough??

Morley says he’ll be adding HD 5970 and quad-GPU HD 5970 CrossFire results soon, so keep an eye for that.  We are also testing some multi-GPU configurations of these cards though we weren’t lucky enough to fall upon a third GTX 480 or GTX 470 yet.  Soon, my friends, soon.

Chis Morley at MAINGEAR updated his results to include some data from not only a single HD 5970 but a pair of them for a total of four AMD GPUs to compare against the NVIDIA SLI configurations. 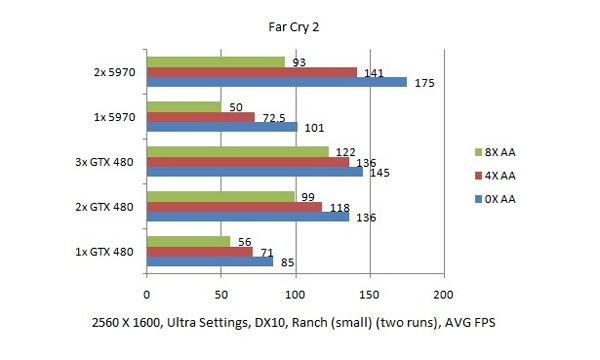 In the Far Cry 2 results you can see that the single HD 5970 is actually very competitive with the single GTX 480, as we saw in our testing.  Adding in the second card pushes the AMD configuration up above the pair of GTX 480 cards in both 0x and 4x AA modes but the scores are about even at the top 8xAA setting.  Even with a third GTX 480 in the, the NVIDIA configuration is only faster on the 8xAA test run.

Morley has a few more benchmarks over on his blog with these configurations so check them out if you are interested.