You know, in truth, I have rarely been a fan of water cooled graphics cards.  They are much more complex to install and tend to force you to stick with one GPU for longer than you might otherwise.  Just not my style – I’m an upgrade and run kind of enthusiast.

However, EVGA’s announcement this morning of the FTW Edition of the new GeForce GTX 480 and GTX 470 has me intrigued – as I think you would have to be after seeing the amount of power that these graphics cards are using during average everyday gaming.

If the advertised results we see on their product page are accurate, EVGA’s water cooled configuration could give us as much as a 40C temperature difference than the 90C or so results I saw with our stock coolers during initial testing.  Not only that but these cards are going to be slightly overclocked as well: 750 MHz core, 1500 MHz shader and 3.8 GHz memory speeds.  (Compare that to 700 MHz core, 1401 MHz shader and 3.7 GHz stock speeds.)

Of course the prices are going to be noticeably higher with these cards than with stock configurations: the EVGA GTX 480 FTW will run you about $649 while the GTX 470 FTWwill cost $499.  Those are $150 premiums over the standard prices so you better be sure this is GPU configuration you want. 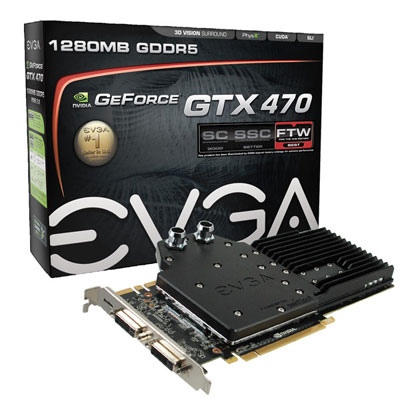 It’s nice to see options like this available right at the launch period and I believe these will be ready just shortly after the April 12th general availability time frame.