Now that AMD has stopped producing the HD 4870 and HD 4890 chips, the HD 5770 is quickly taking over the $149 to $199 marketplace. MSI decided to shake things up a bit in a market overflowing with reference designs from multiple manufacturers. The R5770 is a fully custom part with some unique features that set it above the rest. Stable 1 GHz+ operation is not a fantasy with this card…

MSI seemed to have caught the graphics boom at the right time when it first entered the market last decade, as this once small company has since become a major force in the graphics arena.  They are a Tier 1 motherboard and graphics card manufacturer, right along with Gigabyte and Asus.  One area that MSI had previously excelled in was that of an impressive software bundle combined with a value priced card.  Oftentimes the designs of their cards matched the reference exactly, and very little was done to differentiate their hardware from other offerings.  The bundle was the key for MSI, as they offered a wide variety of applications and games with each midrange and high end card.  Even on low end cards they would throw users a game or two, plus some original applications relating to overclocking and quality settings. 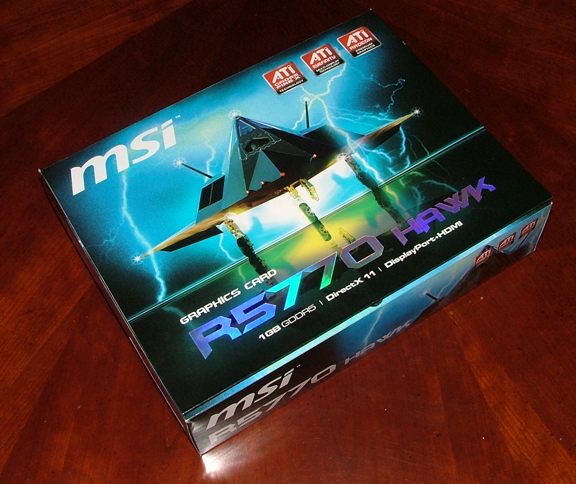 A shiny box with 1980’s stealth technology as the focus!

Now the world has moved on, and so has MSI.  Gone are the days of huge and comprehensive bundles.  Instead, we are now seeing a much more interesting differentiation with the actual hardware itself.  While the first iterations of any new video card will be based on the reference design with reference cooling, MSI is making a name for themselves by being one of the first to offer fully custom designed parts with unique PCBs and cooling options.  Most people no longer care about bundles, as the games typically included in such offerings are older or lower end titles.  Instead, we are now looking at unique hardware offerings that will keep their appeal far longer than a $5 game.

The HD 5770 is the bigger brother of the HD 5750 that I reviewed earlier this week.  The HD 5770 is based on the Juniper XT chip, from the Evergreen family of chips.  It is the midrange offering which is essentially ½ of a Cypress chip, which powers the HD 5870.  Unlike the HD 5750, this is a fully functional chip with no units fused off on the die.  It features 800 stream units which comprise 10 SIMD units.  It also features a full 40 texture units and 16 ROPS.

The HD 5770 is a full DirectX 11 compliant part, and it features the same tessellation unit as the bigger/badder HD 5800 series does.  It also carries the full video playback suite that is contained in AVIVO HD.  Again, the most exciting of these features are the Vector Adaptive De-interlacing and HD audio bitstreaming. 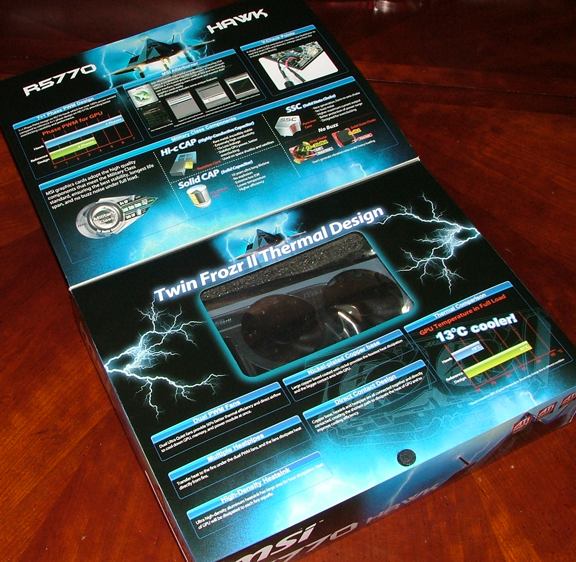 Opening the flip cover reveals a window showing the card, as well as some of the more salient features of the product we are reviewing today.


The Juniper XT core is made on TSMC’s 40 nm process, and is a step up in terms of power efficiency than the 55 nm process that the previous generation of chips was made on.  If you remember, the HD 4890 was a new die with a decap ring, was clocked at 900 MHz and the entire board pulled around 190 watts of power.  Juniper XT is comprised of more transistors (1.04 billion to be exact) running at a slightly lower speed, but has a total board power of 108 watts.  This is a significant jump in overall efficiency, and should allow nearly the same performance at half the power and thermal envelope of the previous generation high end single GPU board.

The majority of retail HD 5770s are fitted with 1 GB of GDDR-5 memory clocked at 1200 MHz (4.8 GHz effective), giving that max bandwidth of 76.8 GB/sec.  This is compared to the HD 5750 which has a slightly lower clocked memory at 1150 MHz (4.6 GHz effective) and 73.6 GB/sec.  This is obviously not a huge jump in memory performance.  Unfortunately a lot of texturing and frame buffer operations suck up that bandwidth, so performance in more pixel fill and texturing dependent applications are not going to be as good as a board with a 256 bit bus running at or near equivalent memory speeds.  To offset this limitation, the HD 5000 series of chips have essentially doubled the size of the on-chip caches.