AMD is ready with its next generation of professional graphics solutions starting with the FirePro V8800 based on the Evergreen Cypress GPU found in the Radeon HD 5870. This new FirePro offering includes a 2GB frame buffer, support for four displays and Eyefinity technology as well as offering performance not seen in any similarly priced developer-level GPU!

Most gamers will have never used or maybe even heard of brands like Quadro or FirePro; instead names like GeForce and Radeon permeate through the air during our graphics card reviews.  But make no mistake, to both NVIDIA and AMD, these higher end brands that constitute the workstation class graphics market are as critical, if not more so, than the consumer cards they are often spawned from.  If gamers’ buying decisions often influence casual PC users purchasing then workstation class users are often setting the stage for the ultra high end consumer.

AMD’s FirePro brand has had a tough goal recently – to gain ground in a market where NVIDIA has traditionally dominated with Quadro graphics cards.  The AMD FirePro brand (it was previously called the FireGL series of cards) has been making in-roads on that goal in the last few years with the release of the RV770 architecture that was more commonly known as the Radeon HD 4000 series of cards for the consumer.  That GPU was powerful, efficient and offered unique features that at the the time NVIDIA couldn’t match.  And again, AMD seems to have hit the nail on the head with the Evergreen series of GPUs first released last September as it is another powerful yet power efficient GPU that developers and designers could get behind.

Today AMD is releasing the first in a series of new professional graphics cards using the Evergreen GPU – the AMD FirePro V8800 2GB.  Gamers will instantly recognize the specifications and some of the features of the card though we do need to point out that the target for this 2GB frame buffer option is NOT gaming.  Instead, the FirePro line of GPUs has a very different goal in mind. 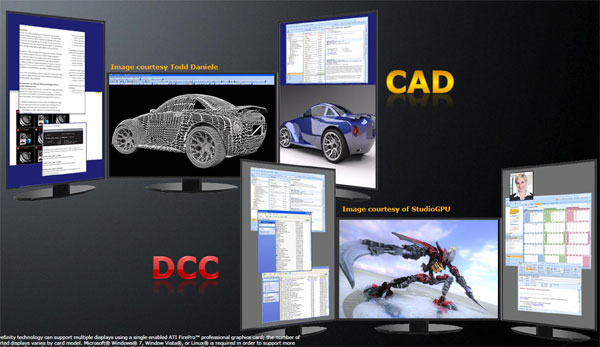 The most obvious place you will find FirePro products are in the worlds of CAD and digital content creation.  Here the unique features of the V8800 and the Evergreen GPU, specifically the implementation of multi-monitor support with Eyefinity, offer up a wide selection of options for developers and designers.  As a multiple monitor user myself I can tell you that once you go with more than one display it is nearly impossible to go any other way. 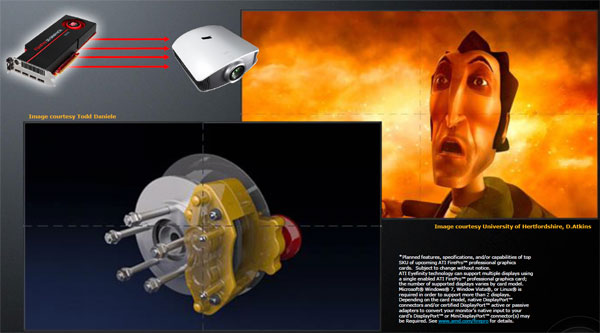 A single FirePro card with a four display outputs could also be used to power a 4k projector; a task PC Perspective would be more than willing to demonstrate should we find ourselves holding just such a projector.  Seriously though the FirePro line with Eyefinity support has the potential to drastically lower the cost of ultra high resolution displays. 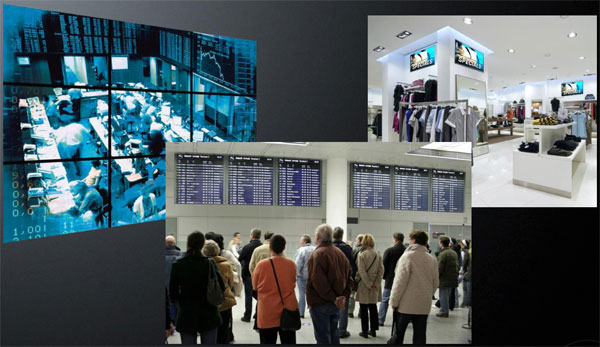 Another area that could see some cost advantages to Eyefinity technology in the professional world is in digital signage – from the diagram above you can easily see how a single FirePro card with as many as 4 or 6 outputs could be beneficial. 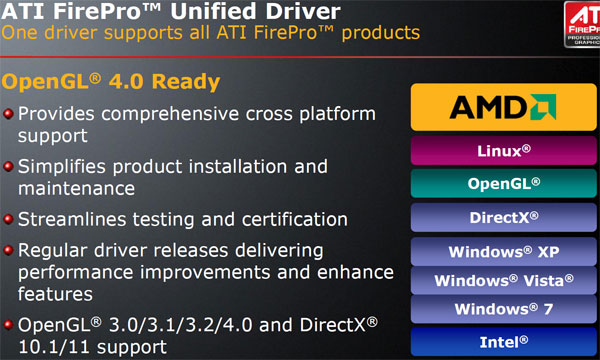 Last week AMD also proudly announced that they were the first graphics vendor to offer an OpenGL 4.0 driver – a fact that at the time was not very compelling to us as gamers.  However, for the professional development world that is often a step ahead (and much more focused on OpenGL) this new driver function could be very important and is another selling point for the latest iteration of FirePro offerings. 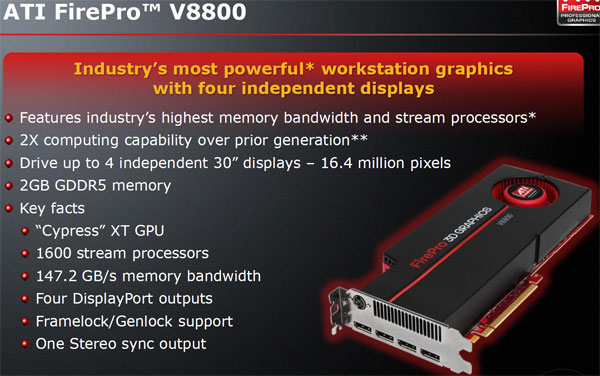 Though it is only one card in a family, the AMD FirePro V8800 is the only option being shown off here today.  As I said above, gamers will find the specifications of it pretty familiar: Cypress GPU, 1600 stream processors, an 825 MHz clock speed and 1150 MHz clock rate on the 2GB of GDDR5 memory.  The V8800 will support up to four simultaneous displays with the four included DisplayPort connections and will also include the professional-level stereoscopic synchronization connection.  (For more information on the Evergreen series of GPUs behind the new FirePro cards, check out or first review of the GPU in its desktop form here.)

Now, it would be silly for me to type this and not tell you that AMD has more professional FirePro cards based on the Evergreen family of GPUs coming down the pipeline soon but how soon and to what degree we can’t quite say.  Just as AMD iterated on the consumer front expect them to release new and updated cards in a staggered release through the spring and summer.

A Chipset With Great Graphics Grafted On & More