Last month we saw the first 800 series release from AMD with the 890GX integrated/mainstream performance chipset.  This featured the first native SATA 6G implementation for chipsets in the industry.  While Marvell was the first with an actual controller, it is a standalone chip which relies on the PCI-E bus to run. 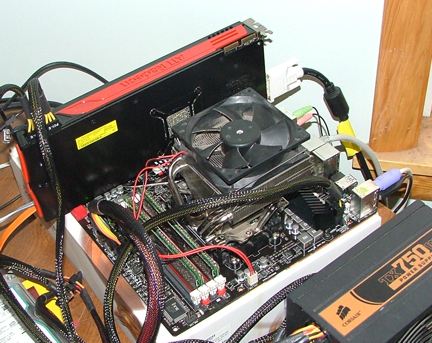 The Phenom II X6 1090T humming along nicely on the test bench with the new Asus Crosshair IV Formula.  Ryan did all of the benchmarks on the MSI 890FX board.


The 890FX is the new enthusiast class motherboard chipset from AMD.  While on the surface it looks a lot like the previous 790FX chipset, it does sport one big change.  The chip retains the same 42 PCI-E 2.0 lanes as its predecessor, and fields 11 engines.  These engines are essentially the max number of individual connections the lanes can handle.  For example it can power 4 graphics cards, and 7 more peripherals attached to their individual lanes.  It is unlikely that they will all be used, but not out of the question.  Four of those lanes are reserved for the southbridge, but unlike the SB600 and SB700 chipsets, the SB850 features PCI-E 2.0 connections. 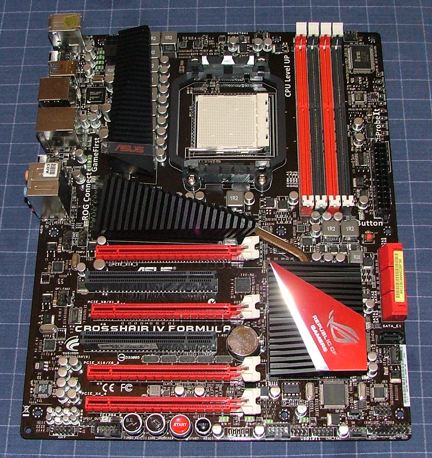 The Asus Crosshair IV Formula is packed to the gills with features.  Note the Overclock, Core Unlock, Start, and Reset buttons on the bottom.


The biggest change is the support for IOMMU 1.2.  This is a key technology when using virtualization.  IOMMU maps device-visible virtual addresses to physical addresses.  Essentially it insures that a DMA request does not corrupt the memory because the VM OS does not know the exact physical address of the memory.  Typically VM’s handle the addressing, but this slows down the memory accesses and increases latency and processing needs.  With native support of IOMMU 1.2, the chipset offloads those tasks from the hypervisor and speeds up performance.

The use of the SB850 southbridge is probably the most interesting aspect for the average desktop user.  AMD has not only included SATA 6G support, but they have radically redesigned their controller.  It now features FIS-based switching, which essentially allows the saturation of the SATA connections without any one device hogging all the bandwidth or delaying commands to other devices.  It also features AMD’s first integrated Gig-E network controller, but details on this portion are scarce.  Most motherboard manufacturers are sticking with Marvell or Realtek PCI-E based Gig-E controllers for the time being.  The final addition is an integrated clock generator for the SB.  This theoretically should enhance performance and data reliability by implementing an integrated clock gen on chip.  It is still a 65 nm part, but it is extremely tiny (less than 80 mm squared). 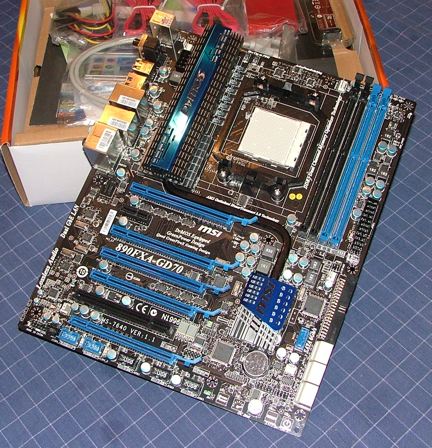 The MSI 890FX is just as kitted out as the Asus board, but it even includes an IDE port via the JMicron E-SATA controller.  Also note the ability to use 4 x dual slot video cards in CrossFire X.


IOPS appear to be significantly improved from previous AMD southbridges.  While some motherboards have yet to implement BIOS changes to improve SB performance, apparently AMD’s reference platform with the SB850 is competitive in IOPS with Intel southbridges, and the addition of 6G functionality combined with the Micron/Crucial C300 SSD are setting some records (as long as that drive is clean…). 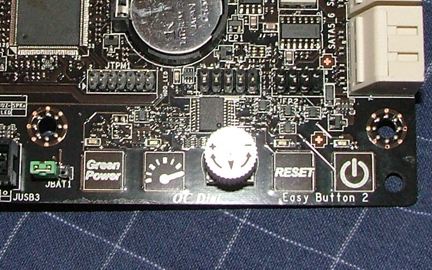 
The 890FX is a high end motherboard part, and as such will likely be paired with the NEC USB 3.0 controller.  MSI and Asus will be releasing two of the first parts based on this chipset, and the rest of the industry will shortly follow suit.  Many of these high end boards will also support CrossFire with 3 or more cards.  So the two primary 16X PEG lanes can be utilized in 16 x 16, 16 x 8 x 8, or 8 x 8 x 8 x 8 configurations.

The chipset itself is very power efficient for a high end chipset.  The 890FX is rated for 19.6 watts TDP when paired with the SB850 southbridge.  Certainly this overall featureset is desirable for those wanting to base a decent VM machine on the Phenom II X6 1090T or 1050T processors, or for those wishing to create a fast system featuring CrossFire X and SATA 6G drives in a RAID array.