The primary card is covered by a metal plate which supposedly helps to insulate it from EMI within a computer case.  How effective this is truly is up in the air, but from a theoretical standpoint it should improve overall audio quality.  Because of the extra chips and functionality of the card, it requires an external power connector.  The card communicates with the system via PCI-Express 1X.  This should give it quite a nice bandwidth boost over standard PCI, as well as make it immune to bus contention issues that have caused popping sounds in many soundcards for years and years.

The other supporting audio chips are of very high quality.  The DAC is the Burr-Brown PCM1796, rated at 123 dB SNR.  The ADC is a Cirrus Logic CS5381 rated at 120 dB SNR.  The OPAMPS used are National Semiconductor LM4562 with 0.00003% THD at 600 ohms.  The OPAMPS are swappable, so a user can adjust the overall color of the audio by using other OPAMPS from companies like Burr-Brown.  I do not foresee many users switching OPAMPS out, mainly because the LM4562s are fairly well regarded in audiophile circles. 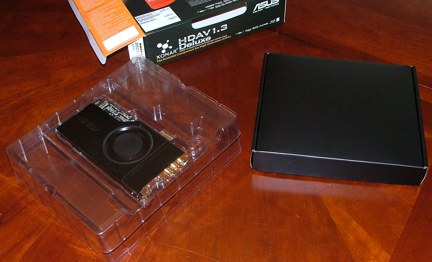 The cardboard box under the plastic portion holds the rest of the bundle, including the daughtercard.


Asus is also working hard on the driver side of the equation.  While reviews are mixed on how effective these drivers are, Asus is at least giving it their best shot.  The GX functionality is essentially a way to enable hardware acceleration for games in a Vista/Win7 environment.  It also emulates EAX 5.0, which is interesting in that Creative does not license that functionality to anyone.  At most a competing product can support EAX 2.0 legally.  This has been a point of contention between the two companies for some years, but one that has been allowed to settle due to the lack of industry support for EAX 5.0 and how Microsoft has tried its best to kill audio hardware acceleration.

The card comes with Arcsoft’s Total Media Theater 3 (TMT3) software suite, which currently is the only application which supports bitstreaming of HD audio through the Asus HDAV series of cards.  This is essentially the basic version of this playback software which supports Blu-ray and HD-DVD formats.

Users must be aware that the card requires a PCI-E 1X slot, though it will work in 4X, 8X, and 16X slots.  The card also requires an external power connection to the power supply, as the PCI-E 1X specification does not provide enough power to this particular card. 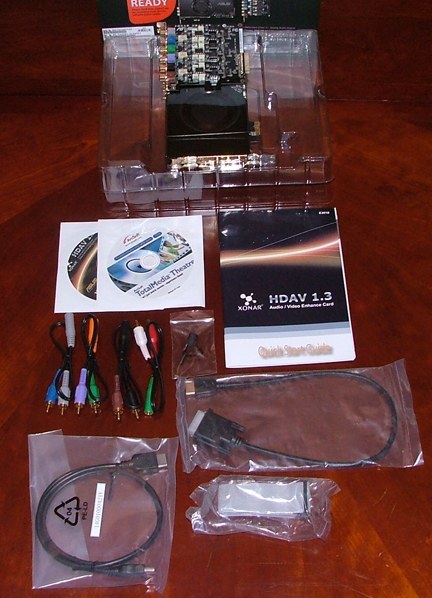 
The software disks that are bundled with the card at the time of this writing are likely not going to get the user up and running.  The drivers on the CD I have are very outdated, and the sound card did not want to work at all in Vista 64.  The version of TMT3 is also outdated and would not work with many Blu-ray disks and did not bitstream HD audio through the Asus card.  This was fixed by downloading the latest drivers from Asus’ website, as well as their specialized Asus-only version of TMT3.

Once these issues were ironed out, then the card started to work (mostly) fine.  One issue that has been left unresolved for me is that when 8 channel LPCM is enabled, it drops one of the rear surround speakers.  Another issue that has yet to be resolved at the driver level, but can be fixed by disabling the GX DSP functionality, is the problem with the Netflix streaming capabilities.  If the GX functionality on the card is enabled through the sound card control panel, then the audio on the Netflix streaming content loops constantly.  A movie is obviously not watchable this way.  Once the GX feature is turned off, then the Netflix player works perfectly fine.