Intel could have 6-series chipsets ready in Q1 2011

We have already mentioned on PC Perspective that Intel had no plans for a new consumer level desktop chipset for the remainder of 2010.  This is important because of the current X58/P55/H57 chipsets lack of support for features liked SATA 6.0 Gb/s and USB 3.0.  Instead, current generation Intel platform users require either an expansion card to add those options or will need to buy a new motherboard with those built on-board.

According to a report over at Digitimes Intel is planning on releasing new 6-series chipsets in the first quarter of 2011 that will likely coincide with the release of the Sandy Bridge processors.  There is specific mention of H67 and P67 offerings for the desktop user though no indication is given on whether or not these new chipsets will support USB 3.0 or SATA 6G.  I would have to believe they would though – if not Intel would be well behind the curve.  As we are just now through Q1 of 2010, the uptake in USB 3.0 alone makes it a fairly sizable success and Intel shouldn’t be ignoring it. 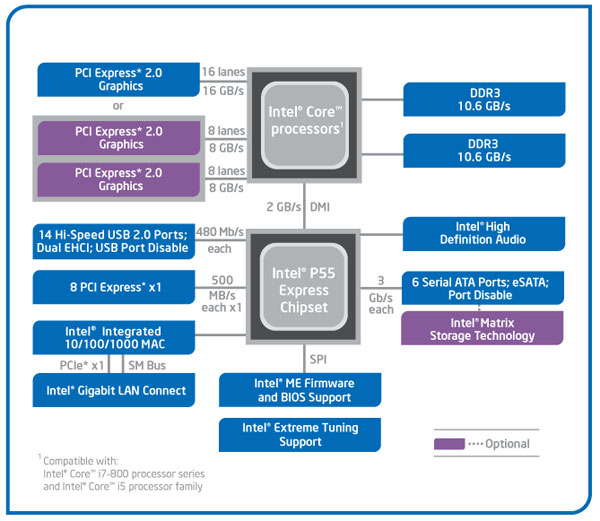 
On the other hand, this is what consumers are left with when competition is pushed out of the market: Intel’s team can sit on their hands for as long as they want to really since first-party chipsets are really the only option after NVIDIA’s removal.

In related news, Intel is in the process of streamlining its CPU marketing labels for motherboard packaging with plans to get rid of the current multiple logos for each series of CPU supported e.g. i3, i5, i7, in favor of a single “Intel Core CPU” message. The plans are expected to be implemented starting in the third quarter of 2010.

However, Intel will keep the Core i7 label for motherboards that are capable of running its Core i7 Extreme CPUs.

Intel commented that the changes will only affect motherboard boxes, and will not affect messaging for desktops and notebooks.