NVIDIA is opening up 3D

NVIDIA is updating its Verde driver, the mobile version of its graphics driver that was introduced a year or previously to help consumers that were frequently stuck with much older OEM-based drivers. With this update comes better performance but also support for a larger array of 3D technologies that move beyond NVIDIA’s own 3D Vision

For those of you that are unfamiliar, the NVIDIA Verde driver is the name associated with the mobile version of the graphics and display driver that you can access through the NVIDIA.com driver portal.  This was and remains a significant thing as it finally allowed gamers to update their graphics drivers on their own, without having to wait for the notebook OEM, and without having to resort to hacked software or visiting forums to find the right combination of hardware and software for their machine.  For the first time, users of the mobile gaming systems could upgrade their NVIDIA driver nearly in step with their desktop brethren.

Since NVIDIA’s first release of its Verde driver in Q4 of 2008, mobile gaming has gained steam and users of NVIDIA-based graphics have benefited greatly from it.  In fact, NVIDIA claims to get over 1 million downloads of the Verde mobile driver every month.  What’s more important, is that basically all the notebook vendors are on board with one glaring exception (*cough* Sony *cough*) and so nearly every mobile gamer gets the benefits this driver provides.  Now users will continue to see the benefits of updated graphics performance while still maintaining the customizations that companies like Dell, Toshiba and ASUS build into their display configurations.

How bad had it gotten for OEM-dependent gamers?  Well, for example, in one case, some notebook gamers are still using an OEM-created driver based on NVIDIA’s 179.32 features.  Since then NVIDIA has added support for PhysX, added 300 SLI profiles and multi-monitor support, added support for ambient occlusion and OpenGL up to 3.2, Flash 10.1 acceleration, DirectCompute, OpenCL and more.  And don’t forget the performance increases that come with newer drivers; titles like HAWX, Fallout 3, World in Conflict and others have seen more than a 30% boost since that older release.  Obviously these are features that we feel ALL gamers should have access to and we are glad that NVIDIA has started this trend with Verde. 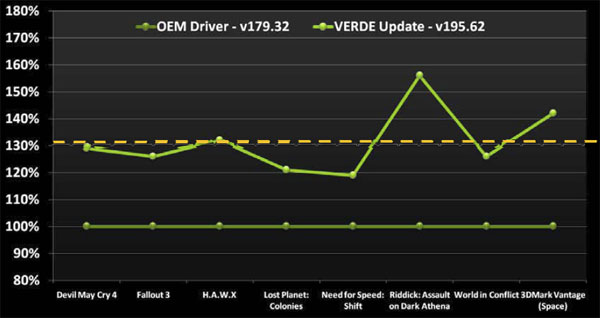 With the upcoming release of the 197.16 driver for notebooks, NVIDIA is not only continuing these trends but is offering up some other great feature improvements.  The first one is support for external displays with 3D Vision technology.  This means that you will be able to hook up your 3D Vision-ready notebook, like the ASUS G51J 3D we recently reviewed, to LCD monitors, DLP HDTVs and projectors that are 3D Vision-ready.

You can see from the table above that the selection of displays here is still limited but if you want you can now use your notebook for larger screen 3D gaming.  You will of course still be using the 3D Vision provided glasses and technologies but soon you won’t have too… 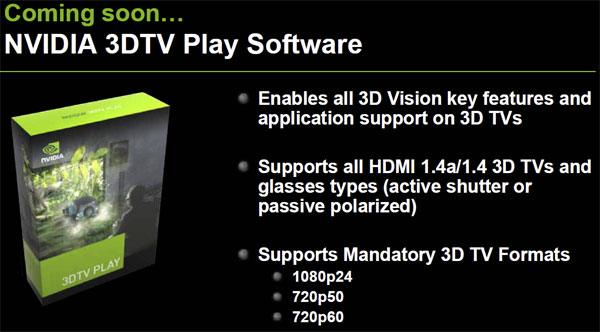 Coming down the proverbial pipe is NVIDIA’s new 3DTV Play software that will allow 3D gaming and video playback on most TVs that are 3D-ready, not necessarily using NVIDIA’s proprietary 3D Vision technology.  This means that all you need to access 3D gaming (or 3D Blu-ray or other 3D content) is a 3D-ready TV, this NVIDIA 3DTV Play software and a compatible NVIDIA GPU.  This is crucial as it means you will be utilizing not NVIDIA’s own 3D Vision glasses, but the technology required and provided by your display, whether that is active or passive designs.

There are some clear differences in what features each mobile GPU will support.  For example, the GeForce 200M series does not have the ability to playback 3D Blu-ray movies but can pretty much do everything else.  Only the GeForce GTS 350M and 360M GPUs are deemed powerful enough to push 3D gaming though they can handle the movie playback just fine. 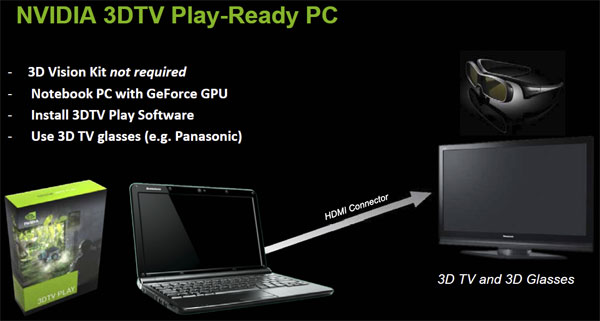 Notice that I said “compatible GPU” not “mobile GPU” – even though the slides we were presented with only mention mobile variants I have confirmation that the desktop graphics cards from NVIDIA will also be able to power 3D TVs using this software.  This is great news as it means readers who are planning to purchase a 3D-ready TV will be able to build a gaming PC or build a capable HTPC using NVIDIA graphics cards and then play their PC gaming titles in 3D; all without having to purchase another proprietary display or having to buy the $200 set of NVIDIA 3D Vision glasses!

Does this essentially mean the end of 3D Vision as a proprietary 3D technology?  Definitely for HTPCs and gamers that are going to be purchasing 3D-ready big screens but that still leaves the world of standard PC gaming to NVIDIA’s designs.  Even if we start to see LCD computer monitors adopt different, non-NVIDIA based 3D technology (from Panasonic, Samsung, etc) then you would still be able to play games on them in 3D with NVIDIA’s new software.

Finally, with the upcoming release of NVIDIA’s 256.xx driver set they will begin offering drivers for desktop, notebook and Optimus users in step on the same dates with the same driver versions and features.

So while the updates to the Verde driver are exciting and we are glad to see NVIDIA finally putting as much weight behind their mobile drivers as they do the desktop driver, the most interesting news is of course the upcoming NVIDIA 3DTV Play software that will enable 3D gaming and 3D Blu-ray support from your notebook or desktop PC to any 3D-ready TV.  It means that NVIDIA’s own 3D Vision technology gets pushed to the side a bit with only the pending release of 3D Vision Surround multi-monitor gaming as the “killer feature”.  But for consumers, it is nothing but good news; more choices for your 3D source hardware (with NVIDIA-based notebooks and HTPCs) as well as more choices for your 3D display.