Military grade components are a big selling point for some of MSI’s motherboards, but this is one that does not include these features.  This is not to say that the board is not robust, it just does not feature the Hi-C Caps and other components that “Military Grade” encompasses.  The board is filled with solid caps and ferrite core chokes, so users likely will not experience blown caps or buzzing chokes.

The board supports Active Phase Switching, which monitors the electrical load on the processor.  When it detects that the load is small, or the chip is in a low power mode, it will dynamically shut down power phases to conserve power and lower heat.  When the CPU ramps up again, the motherboard activates the sleeping phases to keep up with load.  In my testing with this particular feature enabled, I never had a crash occur due to APS not being able to keep up with CPU load. 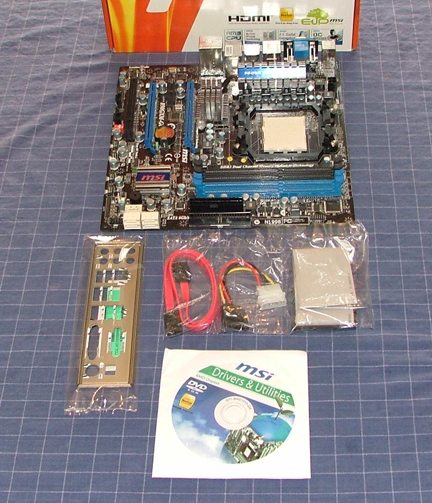 Missing is the manual, due to this board being shipped to me before the entire retail package was complete.


Audio functionality outside of the HD 4290 is handled by the Realtek ALC889.  This is a slightly older codec as compared to the newer ALC 892, but it is still quite competent in the audio arena.  It is a 24 bit/192KHz part which can (with the help of decoder software and the CPU) decode HD audio into 7.1 channel analog sound.  The audio is not breathtaking, but neither is it distracting in terms of quality.  It is more than adequate for most gaming applications, and if a person wants to bitstream HD audio they will likely buy a soundcard that supports that feature, or an AMD HD 5000 series of video cards which can do that natively.

DDR-3 memory speeds up to 2133 MHz are “supported”, but these are obviously overclocked numbers.  The AMD processors officially support up to DDR-3 1333, but have the ability to run at DDR-3 1600 speeds with the correct multipliers.  Anything higher than that requires the base HT clock to be increased from its stock 200 MHz speed.

The BIOS is remarkably well featured.  Under the Cell Menu all voltages, clockspeeds, and ratios can be accessed and changed at will.  Inside this menu is the ability to unlock disabled cores in processors which possess them.  When I first received this board, the Rev. 1.2 BIOS was unable to successfully unlock the extra cores on the Phenom II X2 555.  The board also did not recognize my SATA 6G drive as well.  I received a Rev. 1.6 BIOS from MSI, and by using the M-Flash functionality in the BIOS, I was able to use a USB flash stick to update the BIOS in less than 3 minutes from start to finish.  When updated to 1.6, the board was able to then unlock the extra cores, and it recognized and ran my SATA 6G drive without issue.   Remember, AMD removed ACC support from the SB850 southbridge, so motherboards using this chipset no longer have native support to unlock cores.  Asus uses a separate chip to unlock cores in some of their other motherboards, but MSI was somehow able to shoehorn this technology into their motherboards without using a separate controller to achieve this. 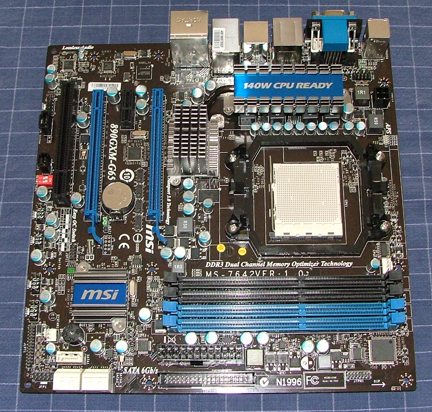 The board is not overly crowded, but it certainly still is a m-ATX board.

The SB850 features six native SATA 6G ports, and five of them are located on the board for internal use.  The last is routed to the back plate for eSATA duties.  Four of the internal ports are rotated 90 degrees from the plane of the motherboard, while one is sticking up vertically from the board.  When two video cards are used, this lone vertical port is covered up and is made useless.  The other four work perfectly fine.  This may or may not be a shortcoming for some, but definitely something to consider.  The board has a single IDE port which is powered by a JMicron chip, as the SB850 no longer supports IDE connectivity.

The NEC USB 3.0 chip is used on this board to provide two USB 3.0 ports on the back.  These are the blue colored ports on the back plate, and there are no internal headers for USB 3.0.  The NEC chip is connected to the system via a PCI-E 2.0 1X lane, which should give it more than enough bandwidth to handle USB 3.0’s potential throughput.

The back panel features a VGA, DVI, and HDMI output.  The HD 4290 can power two of those at the same time, but it usually involves one of the digital ports and then the VGA port.  There are four USB 2.0 ports derived from the SB850 southbridge, and the two USB 3.0 ports from the NEC chip.  An optical output is included from the ALC889 chip, as well as a keyboard/mouse combo port.  The lone eSATA port is also colored blue for easy recognition, and it is a SATA 6G supporting connection.  There is a single Gig-E port which is powered by the Realtek 8111L PCI-E based networking chip.  Finally we have the six audio analog plus which support 7.1 surround sound, line in, and microphone in. 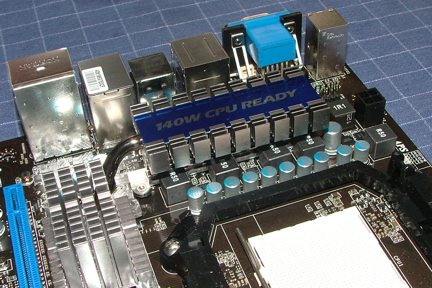 No DrMOS under that heatsink, but still good enough to support 140 watt CPUs.


In terms of overclocking, there are two nifty little tricks that MSI includes with their boards.  The first is a block of two jumpers with four potential settings.  This increases the base HT clock from 5% to 30%.  It may not provide the most granularity with overclocking, but it is easy to use.  The second is the OC Genie Lite setting under the Cell Menu in the BIOS.  When enabling this and then rebooting, the motherboard will spend about a minute or so testing different clockspeed and voltage combinations to try to achieve the highest, stable overclock.  This operation worked fine on Phenom II X4s, X2s, as well as Athlon II X2s and X4s.  It did not work so hot with the Phenom II X6 1090T processor.  OC Genie Lite does not adjust the multipliers on the CPU if they are unlocked, but it does alter the HT base clock as well as lowers the memory ratios so the memory is not overclocked beyond its specifications.  Once a user gets an overclock they can live with, they then disable OC Genie Lite in the BIOS and keep the rest of the settings intact.  If they want to further tweak their overclock manually, they just need to leave OC Genie Lite disabled.  Otherwise, the board will attempt a new overclock each time it is restarted. 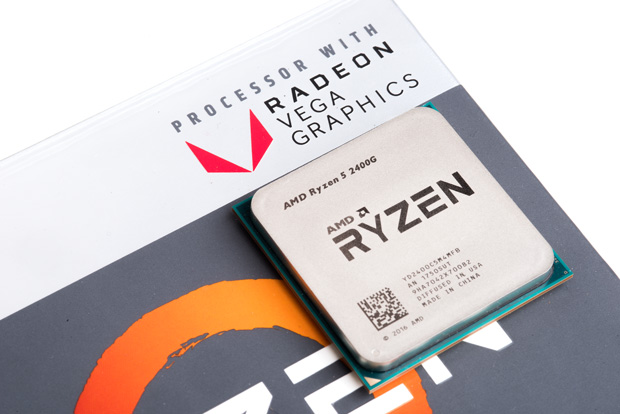