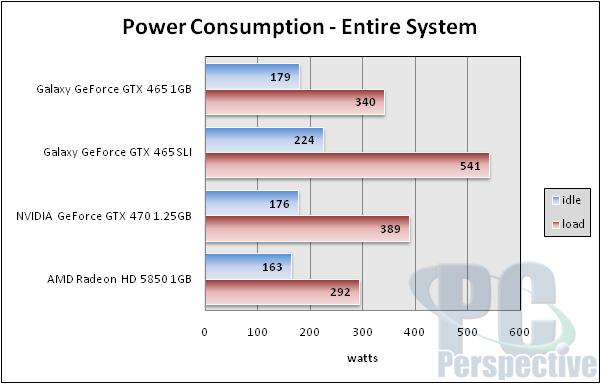 While we can came into this review thinking that the NVIDIA GF100-based designs were less power efficient than the Radeon 5000-series…uh, well that continued to be the case.  The GTX 465 uses about 50 watts more power under a full load (17% or so) compared to the Radeon HD 5850 even though performance was nearly identical between the two cards in our a lot of our testing.  Obviously, if you map performance per watt with that data the AMD card is going to be leader in efficiency.  Luckily for NVIDIA, gamers buying either of these cards are really not that interested in modest differences like this.

Compared to the GTX 470 the GTX 465 did use about 45-50 fewer watts in contrast to the difference of only 15 watts based on NVIDIA’s specifications – either our GTX 465s used less power than expected or our GTX 470 used more.  The 541 watts used by the pair of Galaxy GTX 465 cards in SLI is pretty high and comes in about 100 watts higher than a single GTX 480.

There are few comparisons to be made here, the first of which is the new GeForce GTX 465 pitted against the AMD Radeon HD 5850, both of which will be available in the $279-299 range.  In our gaming tests we found that both cards brought the same gaming experience and performance in our array of titles.  The NVIDIA offering did take a slight lead HAWX and Metro 2033 while the AMD Radeon option was faster in DiRT 2.  Other than that, you’d be hard pressed to tell the difference when seeing them side by side.  This is not a coincidence people – NVIDIA has obviously tweaked the specs, clocks and pricing for this exact reason.

The next question is about the intra-NVIDIA comparison of the GTX 465 and the GTX 470.  Amazingly, the change in specifications pretty much EXACTLY determined the performance differences between the two options as we saw clear 25-28% performance gaps between the GTX 465 and GTX 470 in all GPU-bottlenecked resolutions of our games.  Considering there were 27% fewer shaders, 27% fewer texture units and 25% fewer ROPs that exactness is impressive.  I guess we could have just skipped that whole multi-day testing process, huh?? 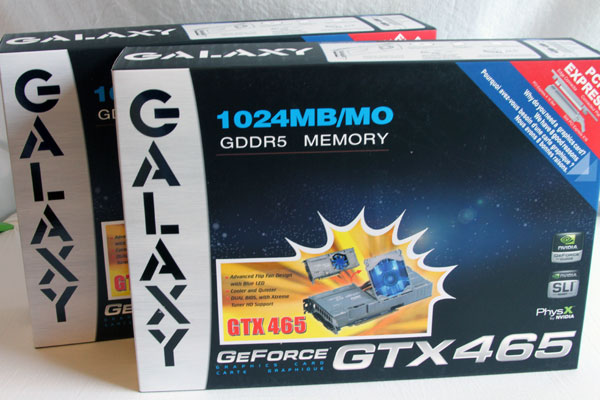 Finally, what about the pair of GTX 465s in SLI?  The scaling percentages were friggin’ awesome as we saw them reach as high as 90% and only dip to 50-60% in one title.  That is a hell of a performance change for adding in a second GPU but what about when we look at the combined GTX 465s (at $560) against a single GTX 480 (for $499)?  Looking back at our original GTX 480/470 review, it looked like this:
All of these comparisons were done at the 1920×1200 resolution and the GTX 465s in SLI are faster than the GTX 480 by a decent amount and tie on Resident Evil 5 and the SLI problematic Dirt 2.  It looks like the GTX 465 could be a good upgrade route to take today and that would even allow you to upgrade to NVIDIA Surround or 3D Vision Surround when that is available later in the summer.

One thing AMD did very well with its last product release is not only increase performance but offer up a host of new features to sweeten the deal.  NVIDIA is making an attempt to do the same thing but it’s hard to not see their solutions as a “me too” effort.  NVIDIA is definitely pushing the new “NVIDIA Surround” feature that will allow gamers to run three monitors for gaming – very similar to the AMD Eyefinity technologywe have raved about here for some time.  The problem with this of course is that with NVIDIA’s solution, you are going to be required to have an SLI configuration to run more than two monitors – each GF100 card only supports two simultaneous displays.  That basically doubles the price of entry into the NVIDIA Surround market and while the argument can be made that only those truly hardcore gamers with SLI would want three displays anyway, it is not a restriction that AMD placed on its customers.  A positive for NVIDIA though is the coming release of 3D Vision Surround – a three-monitor gaming configuration that uses 120 Hz monitors to support the 3D Vision technology that uses active shutter glasses for a great 3D gaming effect.  (You can see our review of the initial 3D Vision setupfrom January of 2009 here.)  I have seen 3D Vision Surround at work and if you like multi-monitor gaming and you like 3D gaming, then you are going to like this.  There are some potential issues though: angling the screens in to “wrap” around you might not be possible because of the angle the 3D glasses restrict your viewing to, etc.  Overall though, this is a unique feature that AMD will not be offering any time soon and could be a differentiating feature for gamers considering going multi-display. I don’t want to leave out support for technologies like CUDA and PhysX – more and more applications and games are utilizing them, including the recently released “Just Cause” PC title.  CUDA applications are still few and far between but if you have found one that interests you then the GTX 480/470 are going to provide some interesting performance gains there as well.  And even though AMD is touting their open physics and open stereoscopic 3D initiatives, until we see real results we can use and play with on our own, then NVIDIA has the advantage here.

We went over pricing on the test configuration page, but here it is again:
It is no surprise that the GTX 465 and HD 5850 are nearly identical in performance and in pricing – both companies want you to chose based on other differentiating features they feel they have the advantage in.  NVIDIA pushes PhysX, CUDA and 3D Vision while AMD pushes Eyefinity, Stream and better power efficiency.

The Galaxy GeForce GTX 465 should be available the first week of June at retail and etailers around the world!

The new NVIDIA GeForce GTX 465 brings the performance and features of the GF100 architecture to a lower price point and does a good job of making a case for itself against the competing AMD products.  SLI performance also impressed us with scaling rates as high as 90% in some cases and with a base price of $279 could make for the first consumer-friendly option for NVIDIA Surround support coming later in the summer.  The Galaxy version of this GPU is a custom design with a unique fan that is both quieter and more functional with a foldout mechanism for cleaning and maintenance.  The Radeon HD 5850 still has a couple of features I wish we found in the NVIDIA options, like support for three displays, but that is somewhat offset by things like CUDA and PhysX that you might not use quite as often but are there only with NVIDIA.  GF100 is finally becoming more accessible to the gaming enthusiast and Galaxy’s custom design only adds to the package.