Intel’s Extreme Edition processors are great for overclockers because of the unlocked aspect of the multipliers but not so great on their wallets. What if instead of $1000+ you could get a Lynnfield or Clarkdale CPU for much less and still get the benefits an unlocked CPU offers to overclocking? Well good news: Intel’s new K-SKU parts are just that!

Intel has come a long way in the decade we have been covering them at PC Perspective, as has much of the enthusiast industry. While many of readers may not remember a time without overclocking and days when manufacturers like AMD and Intel and VIA strictly forbade it, that time was actually not too long ago. Now, when the media and analysts meet with the company, Intel is not only showing off their new architectures and processor designs but are more often than not showing off how “overclockable” the new goods are. The point is obviously to offer both the power efficiency and performance needed for casual and business users but also demonstrate superior process technology and enthusiast-friendly parts.

Up until today, there was really only one official processor in Intel’s current lineup that would be considered overclocking-capable by Intel’s official PR spinners: the Core i7-980X Extreme Edition part. Extreme Edition processors have traditionally been unlocked, and thus more easily tweakable ever since their inception years ago, and when the Nehalem architecture was released Intel continued down that path.

For those of you that might be perplexed, and unlocked processor is one that is considered to have the majority of its internal “switches” controllable by the end-user. For example, using a current Core i7-860 processor for overclocking you would be forced to increase the base clock over the default 133 MHz to increase the resulting total frequency of the CPU. The only multiplier that was adjustable in terms of performance was for the memory frequency which users could throttle down as necessary to keep stability in check.

This actually worked really well for quite a while and most overclockers today will speak of great results with non-unlocked Intel Core i5 and Core i7 processors. But Intel has decided to extend the line of unlocked processors beyond the Core i7-980X and its $999 price point. Today we are taking a look at the new K-series of CPUs, the Intel Core i7-875K and Core i5-655K. 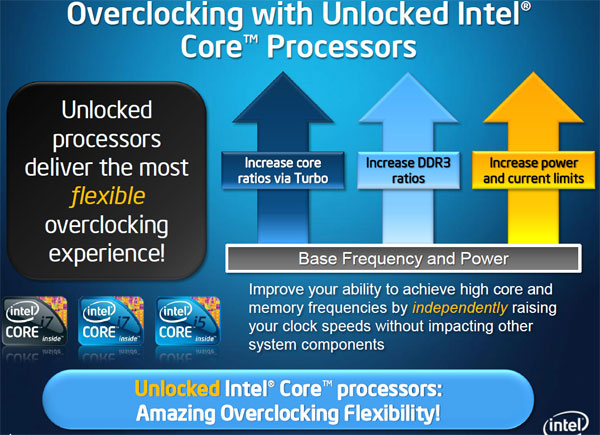 Both of these new processors will come with fully adjustable DDR3, core clock and power settings. That means you will be able to move the frequency multipliers both below and ABOVE their defaults in order to find the best balance of speed and stability for your setup. Essentially, the big news here is that you can now simply adjust the Turbo Mode frequencies to increase the speed of the new K-series parts when performance is needed. You also gain the ability to push a lot more power through the CPU if necessary and the voltages will even scale dynamically with the Turbo Mode settings. 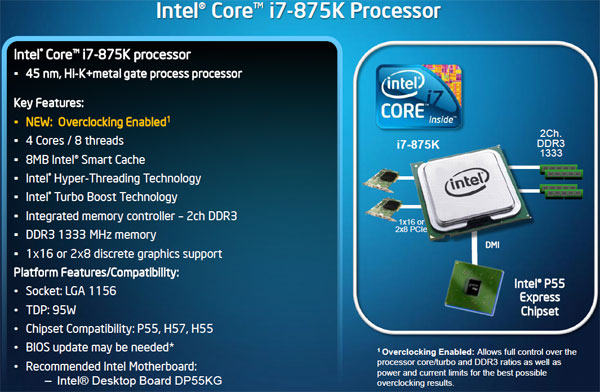 In terms of the processors themselves, they should be very familiar to you. The Core i7-875K is a Lynnfield processor built on the same 45nm Hi-K+ process that previous iterations have used. It is a quad-core processor with HyperThreading enabled, 8MB of cache, dual-channel DDR3-1333 memory controller and 16 lanes of PCIe 2.0 integrated on the die. The base frequency of the Core i7-875K will be 2.93 GHz with a Turbo frequency as high as 3.6 GHz. 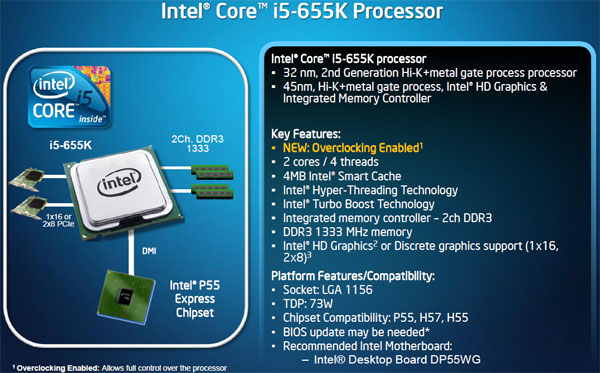 The Core i5-655K is a Clarkdale processor that combines a 32nm dual-core HyperThreaded processor and a 45nm Intel HD Graphics and integrate memory controller chip on the same package. The chip has only 4MB of cache but has the same two channel memory controller and PCIe implementation as the Lynnfield parts. The base clock speed is 3.2 GHz with a Turbo Frequency of 3.46 GHz by default.

Essentially, the Lynnfield and Clarkdale K-series processors are nearly identical to their previously released cousins with the exception of them being unlocked from the factory.