AMD gets more aggressive in the server market

AMD is announcing a pair of new product lines today to address a couple of server markets. The new Opteron 4100-series of processors takes the Lisbon core and lowers price to the point of absurdity. Can a $99 server processor coupled with power-per-core efficiency spell success for AMD in the cloud computing infrastructure? Can can the new FireStream parts put a dent in NVIDIA’s Tesla lineup?

Over the past 6 months or so we have seen AMD’s server strategy for the next few years come to fruition starting with the release of the Opteron 6000 series of processors that featured both 8-core and 12-core units configured for the traditional high end server space.  Usually consisting of two and four socket machines, the Opteron 6000 parts were met with quite a bit of criticism being the first to a 12-core offering though they were usurped by much more expensive Intel Xeon processors not long after.

After meeting with AMD in their Austin offices early in the spring it became apparent to me that while AMD was taking that market very seriously and still has ambitions to dominate in that field, the real target was becoming apparent: the mid-range 1-2P servers that dominate the landscape in volume.  AMD claims that this market consists of buyers looking to expand on the cloud infrastructure that is dominating the news headlines today as well as the small-and-medium businesses (SMB) that are once again growing across the world.

To that end, AMD has tailored the new Opteron 4100 series to fit the niche nicely.

The Lisbon core is a die built from the ground up to be the most power efficient and power-per-core efficient CPU available.  Cloud server infrastructures, and many of the SMB customers that AMD is looking at selling to, have diverse server needs that might differ from what you imagine servers to do.

In this diagram, the yellow diamonds represent “cloud server workloads” while the gray circles are for our more standard server workloads such as databases, etc.  According to AMD the demand of raw performance is much less critical to the success of a machine designed to serve the cloud than power efficiency, density and even core scalability.  That of course doesn’t mean that cloud servers don’t need to perform but it seems obvious that when you are operating 10,000 servers that are not often running under a full load the need to be scalable from a power perspective is significantly more important.

AMD puts it like this: cloud servers tend to operate at 10-20% of their top performance capacity at any given time and only need to be able to “spike” CPU performance at specific instances.  To design a CPU that could do both (have fantastic power efficiency and the best performance available) would mean you would have to sacrifice on both ends of the scale.  Instead, AMD is clearly targeting power efficiency with “good enough” top level performance in order to address the largest possible server segments available, all without removing scalability or key features. 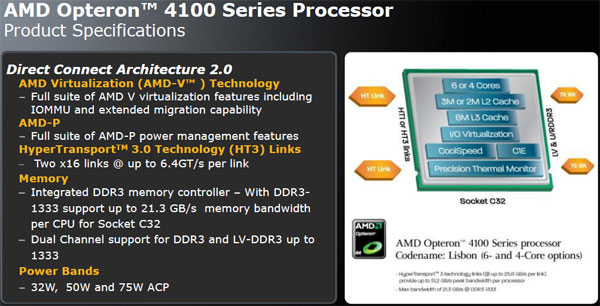 The Lisbon core still has a lot of performance and features to offer of course as the AMD processor team continues to improve on their architecture in the long run.  Virtualization and power management features were added as was the second DDR3 memory controller to support 21.3 GB/s of bandwidth per CPU socket.  AMD will be offering the new 4100-series parts at 75W ACP (average consumed power), 50W and even a new lower 32W stepping.

These new 4100-series Opteron CPUs are dramatically more power efficient than the previous AMD 2000-series of parts and will enable data centers to maximize their deployment space by putting more CPU horsepower behind the standard power budgets most racks are offered.  This will also mark the first 2P-capable server processors available for under $100 – the Opteron 4122 will be selling for $99 and will enable the lowest total cost servers with much lower requirements on power and design.

The price drops from AMD here should not be overlooked – compared to their own previous generation offerings and especially compared to Intel’s current Xeon lineup the Opteron processors are going to be a steal.  The 4000-series of CPUs will be selling from as low as $99 up to $698 compared to as high as $1663 for Intel’s top 2P offerings.  And unlike the Intel way of offering server CPUs, AMD’s Opteron series will offer the same features across the board even down to the $99 option; Intel’s CPUs slowly lose features as the price comes down and only the top level parts see all that is available.

The pricing sheet from AMD shows you how the new lineup breaks down.  The most expensive new 4100-series CPU is actually the 4164 EE that is rated at only 32 watts average power yet includes 6 cores running at 1.8 GHz.  The fastest clocked option is the 2.8 GHz Opteron 4184 rated at 75 watts for 6-cores but it will only run you $316!

The future is always laid out at AMD and that is something businesses can count on – AMD is known to be very stable in their socket and platform options and the upcoming Bulldozer-based designs coming in 2011 will be socket-compatible with servers purchased based on the Magny-Cours and Lisbon processors enabling customers to plan for the future and predict costs.

With the targeting of the cloud computing infrastructure and the dramatic lowering of prices on the Opteron 4100 series, AMD is making a bold move against the largest segment of the server market.  By under cutting Intel so drastically on pricing AMD is obviously will to sacrifice short term profits for long term market share and mind share of customers.  Obviously the processor teams at AMD are getting some advice from the graphics division acquired during the ATI merger and I think this is the right move to make based on the technology available today.

AMD definitely needs the Opteron 4100-series to be a success in a big way – the pricing scheme they have worked up demands high volume.  We have not yet seen design wins from AMD or its partners on this front and that is somewhat disheartening.  AMD claims that any potential “cloud” customers they have with custom built designs have to remain a secret so we may never know who is or isn’t interested in AMD’s new line of Opteron parts.  I assume that we will eventually get basic information as quarterly earnings calls commence but for now we wait.